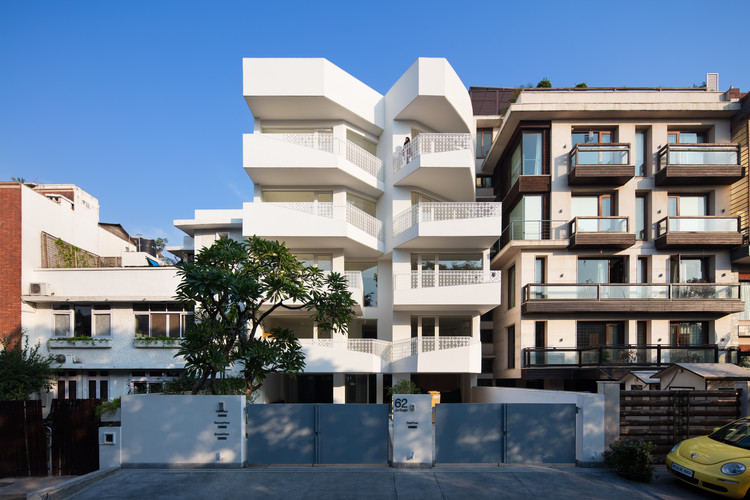 Text description provided by the architects. Breaking the ceaseless row housing of Delhi, 62 Jorbagh occupies a unique site in the heart of India’s National Capital Region seamlessly amidst an urban context. With a plot size of 314 sq. m. and a total built up area of 1,114.8 sq. m., the program segregates the built volume vertically into a basement, a stilt floor, four 3-bedroom apartments, each with a helper’s quarter and terrace. Sited in a heritage-rich context with the Safdarjung tomb & Lodhi gardens in proximity, the architecture of this modern Indian home is a perfect union of contextual nuances and an appropriate response to sustainability issues in the modern world.

The initial brief from the client was to retain the sentimental value of the time-honored local Champa tree with its characteristic, ample foliage to craft an abode that is induced with ample amount of light, greenery and cross-ventilation. While tackling the challenge of a deep linear site, openings have been planned on the shorter sides North and South, namely the front and the back, in order to maximize the light, aerate the built and establish a visual connect with the community park outside the site. Through paper model experimentation and several solar studies, the volume has been strategically planned to open up the visual angles facing the park and setting up a series of ‘fluttering’ walls, with an orientation that is aligned to the movement of the sun. Breaking the typical regime of orthogonal projections, the resultant curved massing presents mutual shading in the building to cut off the harsh summer sun, whilst allowing the winter sun to break into the building.

The core massing in relation to the exterior windows and balconies is designed such that the green-scape is visually accessible from all the interior parts of the house. The inter-spaced voids and balconies in relation to the exterior openings provide natural light, ventilation and views of the greenscape throughout the building. The façade has been rendered with an interplay of masses and full-length glazing, fostering on the presence of gardens on either side. The inter-spaced voids and deep ‘sun-shaped’ balconies serve as nuanced vertical shading elements that block the harsh summer sun, while still permitting the winter sun in, by this means increasing the usability of the balconies throughout the year. Another design intervention as a result of a gash between the side building on the east endows the façade with a motion effect. The buffer oscillating mass between the built decreased the compactness and escalated the outcome, thereby bringing the insides out and outsides in.

Diverging from the conventional rentable apartments, this habitation invests on its origins of a typical Delhi dwelling with crème walls and elegance. Typically, in deep plots, the central parts are devoid of ample light and ventilation on the lower floors. To alleviate this, the existing system of shafts and openings have been capitalized on to ensure that adequate natural light and ventilation penetrates throughout the built mass, making even the lower floors climatically comfortable. As a result of the layout, the central structural grid manifests itself as a division between the private areas and the common areas of the house. The three bedrooms on the right while the living area, kitchen and servant quarters are aligned to the left with punchers of light shafts.

The spaces cater to basic functionality needs of built in wardrobes, kitchen services, washrooms etc. Basic white crème walls and a light-shaded colour palette light up the ambiance, to create a canvas for new cultures and identities to blend in. Qualitatively, equal importance has been given to designing of the helper’s quarters, a program which is usually neglected in Developer Housing. To invite maximum sunlight in the north, the rear façade is fully glazed to ensure that the bedrooms of the servant quarters are lit and properly ventilated. Moving beyond the studio’s sustainable and technology domain, the adaptive aspect is manifested in the small, intricate railing design in the balconies that take inspiration from the surrounding historical context and application of local building crafts.

To avoid disintegrating of the mass, the deep balconies have been ornamented with a perforated Jaali- style railing.The customized embroidery in MS railing acts a screen allowing selective light and visual contact, which facilitates the creation of small intimate spaces even in the semi-public setting, while augmenting the volume with an old Delhi, Lutyen-esque essence. The pattern of the railing transforms from being opaque to being more open, in order to deliver a view of the surrounding vegetation. Even though the square footage that could be given to the helper’s quarter is of bare minimum standards, by providing adequate natural light, ventilation and views to the park, the small space has been made habitable. With a vision of adaptive, technology-driven & sustainable design, this residence plays an epitome of a perfect blend of contemporary with traditional craft derived from a heliotropic context. 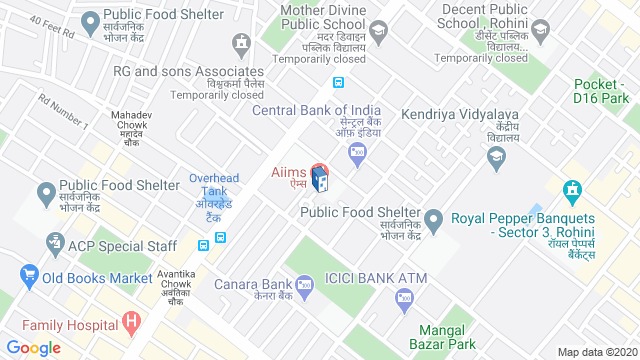 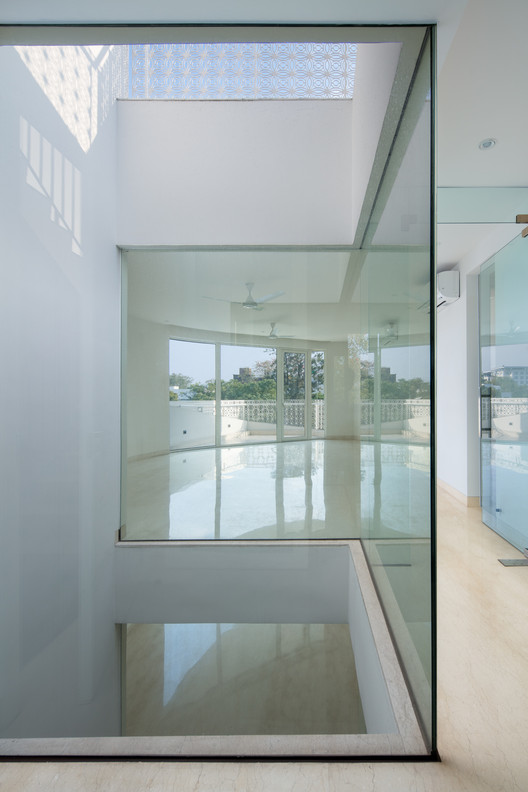