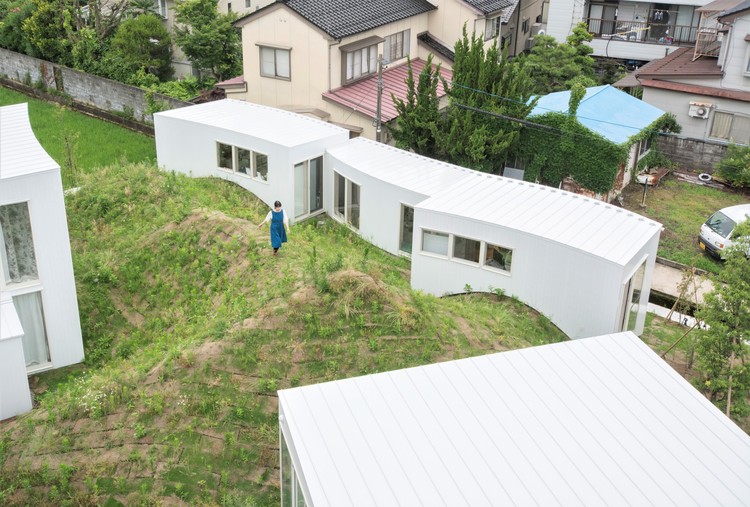 Text description provided by the architects. In Toyama City, Toyama Prefecture, the office, salon and office staff are planning to place three houses on one site. Toyama is surrounded by a steep, folding screen-like mountainous area of ​​3000m class such as the Northern Alps and Tateyama Mountains on three sides, and the mountains carry clean snow-melt water nearby, and a large plain like a deep bay. Blessed with a beautiful and rich natural environment that spreads out, you can see the four seasons changing.

The Tateyama Mountain Range with Kurobe Dam creates a landscape that symbolizes Toyama. The area around the site has now been converted into a residential area, but it was once used as a paddy field, with remnants of waterways scattered throughout the town. On the west side of the site is a clean water channel, and on the south side is a rice field that draws water from that channel. On the opposite side (north side) of the whole road, there was a park with a tree, which was a playground for children. When building a building with three different uses on a site where each side of the east, west, north and south faces different environments, a "mountain" is created by embankment instead of a fence, and the site is divided into three by the "mountain", The mountain ridgeline is planned to have three different environments.

From the window facing the mountain, you can see the flowers and creatures that grow naturally from the surrounding environment. Each of the three buildings has one (salon), two (house), and three (office) volumes. The six building volumes are built at three different ground levels: GL ± 0.GL + 1000.GL + 2000. The living and office rooms used by the office staff, the workspace and the salon where the unspecified majority are gathered are built on the same level, enabling horizontal movement without level differences along the mountain contour line. The “mountain” not only softly divides one site into three sections, but also functions as an observatory overlooking the Tateyama mountain range, as well as creating a local landscape. The reason why the plane of the building is slightly curved is that the arrangement with the mountain does not look artificial. 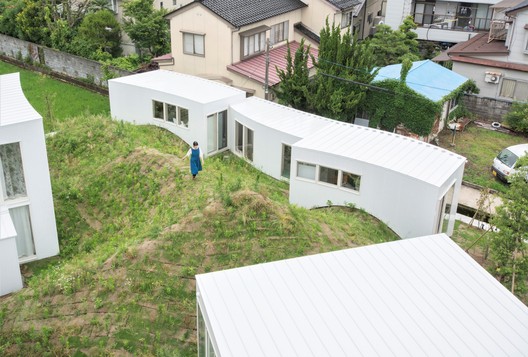