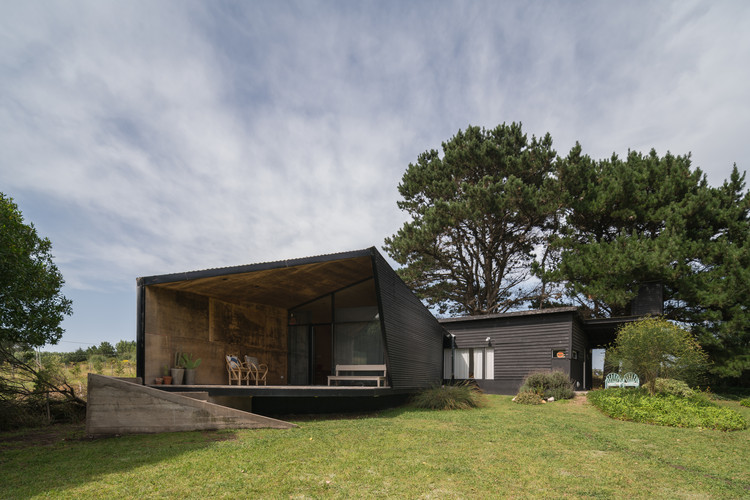 Text description provided by the architects. Playa Chapadmalal is an urbanized strip between the coast and the large marplatenses stays, which gives a character that toggles between rural and marine. We are in the South Coast of Mar de Plata, Barrio Playa Chapadmalal, 6 blocks from Route Prov. No. 11 with access to the Cruz of the South Beach, an area of 19.00mts x 51.00mts with a construction existing use for holiday approx. 60m2 located on the bottom and at the highest point of the ground. The whole area has a strong landscape value. The program called for a bedroom and a new bathroom, expanding the room and closing the existing kitchen. Everything was solved by placing a transverse strip to the original construction. The design would maintain the character of the two buildings linked to the personal history of the owner. Santorini house was projected from an existing cabin about 10 years, to which was added a wing in steel frame covered with sheet metal outside and inside with wood paneling.

Noting the boundaries, the location of the volume existing unresponsive to the axes of the land and a backdrop own grove and the adjoining land (possibility to be acquired in the future), took us to the first resolution: that the construction is part of a game of contrasts, that landscape plays with architecture. It was decided to place the proposal on the higher side of the slope of the ground down to a stream. Finding ourselves with an existing floor level seemed appropriate that we continue. Thus the new container volume is separated from the floor, keeping the natural conditions of the ground, minimizing visual obstacles in the landscape, accentuating the undulation of the ground in the garden and allowing continuity and inner link with the existing. The proposal lies on the dividing South axis, seeking protection from prevailing winds and opening up to the best views and sunning. The general volumetry with existing ends forming a "L", generating a new access to the joint of the two volumes. Being the focal point of the house, marked by the device had to be invented to support the roof of the cabin to the original bearing wall removed. Aims to solve the specific problem solving support, this piece became the mark showing the intersection of the two times in history.

The central distribution point, accompanied by a single service volume, to organize spaces and tour of the proposal. Space fire that is attached to being existing, desk space used by all the continuity of movement with visual shots foreground and background, while being part of the equipment of the bedroom and terrace recover views and soil. Outwardly materials but unified by the color, are displayed with their differences, also inside the cabin in the original wood was painted white, while the addition kept the original color of the plates. Constructively the system is used was Steel Frame, supported on walls of reinforced concrete pronounced the slope of the ground, and between these partitions support a separate dry mezzanine floor, away from moisture upward. Three materials are that respond to the final volume: metal, glass and phenolic plates. Which should respond to the economic demand, climate and future maintenance (being a holiday use). Seeking an end unit image of the set it was suggested that all that exists is painted in black. and emphasizing on the surrounding landscape through a set of contrasts, both in its horizontal position with the tailstock of the vertical of existing trees and its color composition.