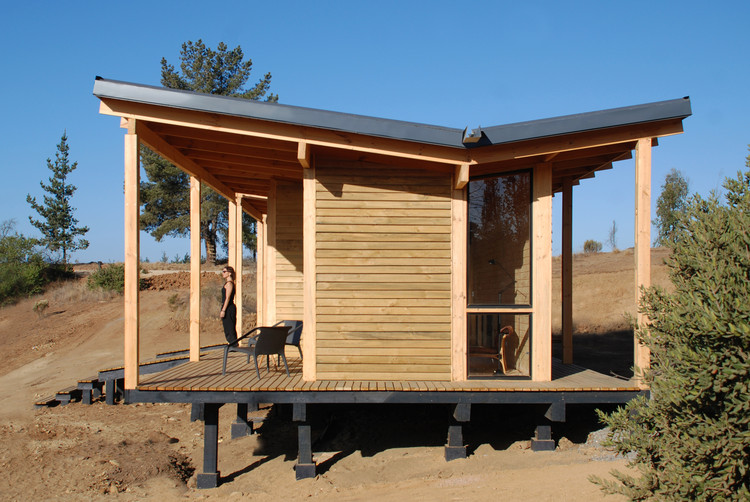 Text description provided by the architects. This work corresponds to a vacation home, the first construction within a condominium located a few minutes from the town of Matanzas, Navidad. Given the conditions in which it is located, the first thing was to look for the distant views of the Pacific Ocean and the immediate territory, such as the existing vegetation, the ravines and, of course, a good orientation that allows the work to maintain sunlight throughout the year and good ventilation.

As an initial requirement, we requested the design of a single-family house that manages to incorporate in just 60 interior m2 a program that accommodates three bedrooms, a living room - kitchen - dining room and a bathroom, in addition to the exterior terrace spaces. The proposed volume is proposed longitudinally in favor of the slope. That is why a modulation of three separate volumes is solved, which organize the public, private (children) and private (adults) program. The separation of these volumes is done through 2 cuts that allow having the north-south domain of the land in which it is located. In order not to lose the continuity of these, a broken gable roof is proposed, as an envelope, which seeks to dialogue with the existing slope and at the same time marks what is the circulation space within it and the opening towards the views.

As for its materiality, the entire structure is made of dimensioned wood, seeking from the first moment that both composite pillars, beams and trusses are the expression of the finished work. The partitions are raised in a SIP panel and coated on the outside with a rough horizontal shed. Both the sky and the interior faces use a slotted plate. Regarding the technology used, the use of solar energy through photovoltaic panels stands out, which give the electrical support to the entire house.