Save
A Home in Between / Ego Design Studio 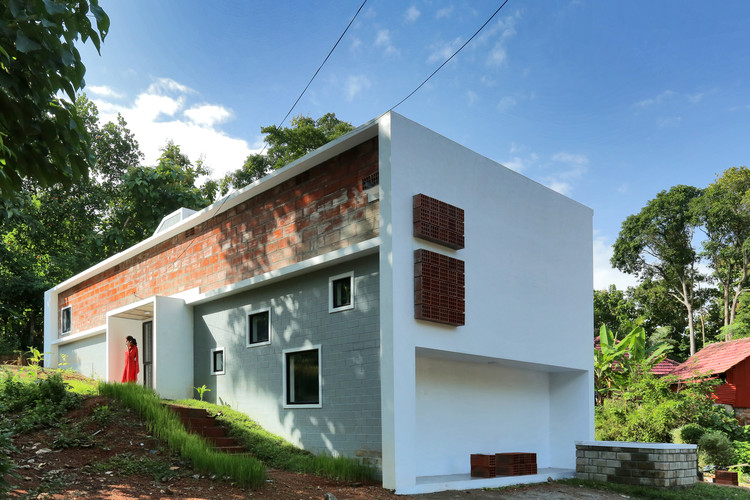 Text description provided by the architects. Designed as a small, but big home with a limited budget on a relatively small sloping site in a warm humid tropical climate, for a lottery seller, his wife and their 5 year old son, with a grandmother visiting regularly. The project had to be completed on a limited budget of 12,00,000 Indian Rupees. Every home is a house, but not every house is a home. In today’s society, despite our incapability to understand any human mind completely, in his attempt to create a mark, the architect dictatorially curates every space he designs for his client. The residence negotiates the dual existence of ownership, both by the architect in terms of his designed signature object, and by the user in terms of the intimate customized spaces where he can design how he uses them.

This is an attempted mediation between home and house, user and designer- the former accommodating the intimate spatial personalization and memory formation by the client, while the latter becomes the image, or signature, of the architect.  The Content: ‘A home in between’ is a design exploration of Juhani Pallasma’s essay ‘Identity, Intimacy and Domicile,’ which explores the duality of a modern designed residence where the contradictory ideas of home and house try to coexist. A multi-functional interior is a spatial construct transforming over time with the user on a daily basis, thereby attaching to them on a personal note, forming their own idea of HOME. House: The exterior skin that engulfs the home is an imagery object, individualistic in formal character and contextual in its voidal response to the site boundaries.

Interior: The project was an effort to redefine the popular social notion of quantity of space over quality of space. In a society, which considers number of rooms as a criterion of a big house, this one attempts to give each space activity & time based multiple existences. The inner primary activity spaces flanked by thermal & activity buffers- a level navigating step corridor & courts- offer potential spatial appropriation for the users. They form an individual’s personal activity space when needed, and enlarges into a larger spatial construct for the family when required. The buffer spaces are where the child can appropriate his activity niches, allowing him to build his own perception of HOME. This personalization acts as a binder in memory formation and increases personal association with the space.

Exterior: The skin, the exterior, the outer façade forming the HOUSE, is but responses to the nearby boundary conditions and the local climate. Each façade responds to the immediate neighborhood through its porosity. The south side is agricultural land which has the possibility of staying as an unaffected open area for a few more years. The overlooking facade is an interlock brick wall with specific openings framing the agricultural land at different levels and the main door opening to the same. Towards the north side lies a small vacant land with the proposal for a new building, which will reduce views/ privacy while also reflecting heat from the south facing walls. Hence the entire northern facade is made of porotherm brick, porous along the common areas and solid with curtained windows along the cooking and sleeping spaces.

Thermal Comfort: The built form is aligned along the East-West direction, with its longer sides with major openings facing North and South, while its porosity allows ample wind movement. The house has a temperature condition of about 5-7 degrees less than the surrounding houses due to usage of porous jalleys, weinerberger materiality & thermal buffers. Materiality: Walls Thermally insulated Porotherm bricks for walls and jalleys, forming the skin of buffer courtyards, allowing ventilation and cutting tropical sun for thermal control. Locally available concrete interlock blocks for remaining walls with a manufacturing unit nearby to be manually carried to site. Windows: Window sizes derived out of block sizes to avoid brick cutting. Doors: Old wooden doors were sourced and reused from demolished house. Lintels: Metal pipe lintels cut into the bricks to avoid concrete lintels. 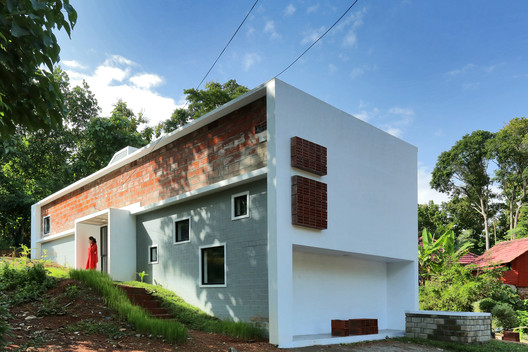