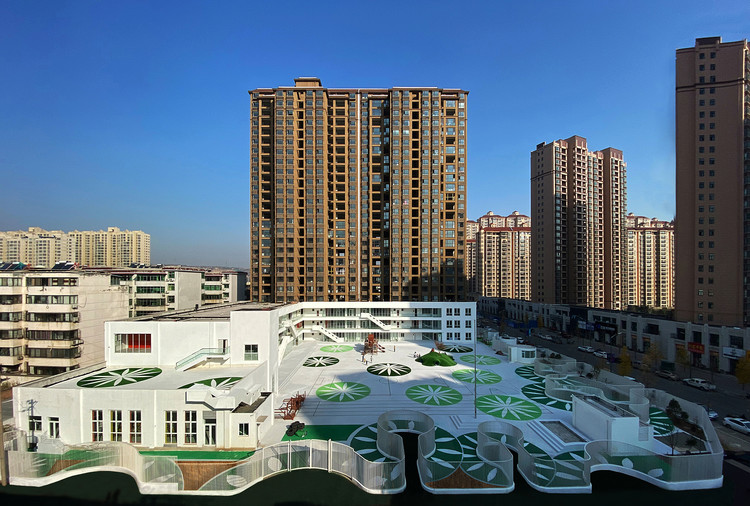 Text description provided by the architects. A Park Embedded into Community
Lingbao City is a county-level city under the jurisdiction of Sanmenxia City, Henan Province. This was a building renovation project located in a community in the north of Lingbao. Later, it became a child growth and development center of the area. Before transformation, the original building was of low quality, with cramped space, and an unfinished office building was on the opposite to its south side. And the construction period for the project was tight. What’s more, this was the first time for a well-known Chinese preschool education institution to develop the county-level city market, so the conservative expectations of the local market led the start-up capital relatively limited.

Under such conditions and circumstances, we still hoped to build a small white world different from the whole community, a clean and real space where children can concentrate on playing and cognition, exploring and thinking, so as to obtain true feelings and happiness.

Removing the decorations and all the extra vertical lines on the L-shaped corridor, getting rid of the original shape, we cleaned the external facade of the original building as much as possible to make the building concise and stretching. At the same time, with five sets of slides leaning out of the facade, the outdoor space of each floor are connected, and children’s activity paths became undulating and has a happy flow. Pitching in from the outside to the inside, walls with high saturation color were used locally, which not only leapingly while continuously established the stereoscopic sense of the deep white space, but also guided the transformation order of the functional space. The feeling of purity was intended by us to be spread to the outdoor playground, eliminating the boundary between the internal building and the external space, which two parts ultimately extended and integrated with each other.

At this point, even though the entire site and community had been clearly defined, but the site was separated from the community, like floating above the skin of the later one. This was not yet what we’ve expected. Our vision is an urban space where children and the community learn from each other. And the fence at the edge of the site became the interrelated critical surface.

Accordingly, we gave up many large and small plots around the site and returned it to the community as its public space; and this made the walls thick to form a middle zone between the growth and development center and the outer city. In the spaces outside provided by the roundabout fence walls, the community will furnish with rest seats and sports equipment, and plant trees. Hence people can get closer to the internal playground and be surrounded and infected by the activities of the children. They can talk to the children and feel the purity in the eyes of children. At the same time, children can curiously watching the elderly in the outside playing chess and learn the skills, get used to normal greetings and exchanges with strangers, and even observe the small crafts and business practices of vendors who occasionally set up stalls outside.

The curved fence walls also influenced the developing of the interior activity spaces. In this way, layer by layer, from the outer city, the middle zone, the tortuous boundary, various types of internal venues, the outdoor platforms between the building and the playground, the outer porch, the front hall of each outdoor activity venue to the various indoor activities and functional spaces, a multi-dimensional experience is set for the children to perceive when crossing through the spaces and grow up in exchanges. Correspondingly, this child growth and development center is like a new form of park, organically embedded into the community, injecting new vitality into the community.

After opening to the public, the child growth and development center has been gradually referred to as "paradise without walls" by local people. Residents of the community are attracted to bring their children to play here; the rudimentary municipal road on the south side of the site raised concern, which has been put on the agenda and will be repaired as soon as possible; the office building opposite has been negotiated by some people to buy and complete its construction; last but not the least, residential housing prices in surrounding communities have also increased by 10% in just a few months. This park embedded in the community is gradually affecting and improving the whole community. 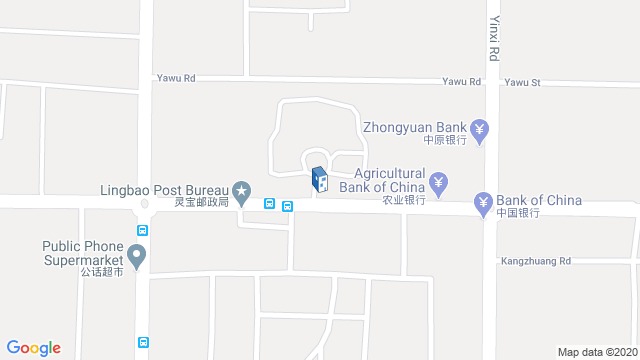 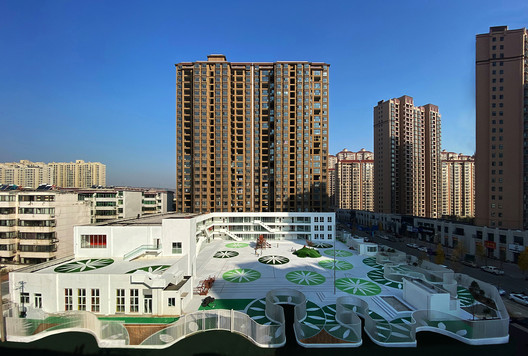