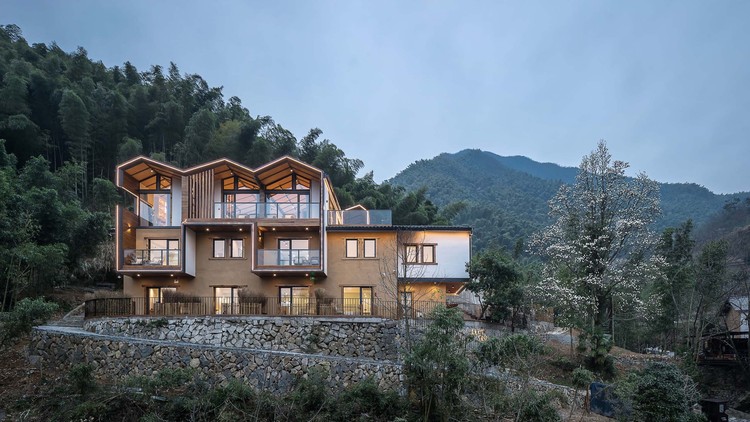 DESIGN CONCEPT
Faced with the complex site and the demands of the owners, how to make full use of every inch of space, and think about the possible behavior patterns of different people living in the hostel, we reorganized the original traffic and functions of the site. Without destroying the original site relationship, we strive to form a complete solution.

SITE ANALISYS
The whole village presents a Y-shaped valley shape. The site is located near themountain on the west side of the village and has a good view of the landscape.At the same time, such a high point can be seen from the village entrance andother locations "Landmark" building.

The second phase and the first phase are separated by water. And there is a large height difference in the vertical direction.

The original house is a soil-damaged house in the 1970s. It consists of a main building with 3 bays and an additional part on the right two bays. The internal wooden structure beams and columns have a small cross-section, and there is a problem of decay, which has greater structural potential safety hazard. We replaced the original structural system：removed the internal wooden structure and replaced it with a steel structure. And retained the external soil germ wall.

The site  is  complicated because it is built on the mountain. The front is a small platform, and the back has a large height difference, which shows the status of the combination of slope and platform, and there is a hidden danger of landslides.

In order to further enrich the public activity area of the entire project and increase the number of guest rooms, the capacity of the original building must be expanded. We add to the original building form: the third-story space is implanted as the public area of the hostel. This public area occupies the best view of the landscape. At the same time, it is connected with the largest site on the back in the vertical elevation. Through the connection of the elevated corridor, it expands the external activity space of the public area and turn the originally negative mountain back into an active venue.The first and second floor spaces were converted into guest rooms on the premise of not making major changes to the original adobe wall. Due to the transfer of the main event venue, the original front platform on the ground floor becomes the exclusive courtyard space for the guest rooms on this floor.

Due to the limitation of the original building's depth direction, we moved the traffic aisles that should have appeared inside the building outwards, combined with the terrace on the back to form different levels of traffic space, and formed vertical communication and echo in the vertical direction. At the same time, the reconstructed platform effectively solved the hidden danger of the original site landslide.

The height of the site on the back of the building is relatively flat, and it is organized into two platform relations in accordance with the current situation: we arrange the swimming pool on the platform on the lower level, and resolve the height difference by overlapping water. At the same time, the flat layout of the swimming pool presents a certain angle with the building, facing the valley direction, bringing the visual experience of the infinity pool; the open space on the upper floor is used as an outdoor activity camp, providing ample outdoor activity space for guests of families or groups.

In the final architectural form, the relationship between the original part and the new part is formed. The roof of the new part is placed vertically on the roof of the old building, and the "gable side" is covered with glass to obtain the best landscape resources. The shape dissipated in this form also avoids the problem of excessive roof mass. The undulating roof brings an interesting interior space experience to the three-story public space. In addition to retaining the adobe wall to pay tribute to the original traditional building form of the Dai people, we also retained some two-story cornices to effectively protect the adobe wall from rainwater erosion, and also respect the original building's construction practices.

As a public space that hosts the main activities of our guests, we try to weaken the existence of the building itself. Large-scale floor-to-ceiling windows on the front provide unobstructed views of the outdoors, while the semi-outdoor space on the balcony allows guests to further communicate with the lives of the mountain folk.And the long bar on the back allows people who are indoors to relax to have a direct connection with those who are outdoors.The outdoor terrace of the building connects the swimming pool with the campsite through an elevated gallery, becoming a part of the site.

As the most private part of the homestay, we make full use of the value of each guest room through reasonable function organization: the first floor is set as a guest room with a private courtyard; the second floor expansion room is set as a suite; the original auxiliary room Remodeled into a LOFT family room.This brings different holiday groups to meet their individual needs. 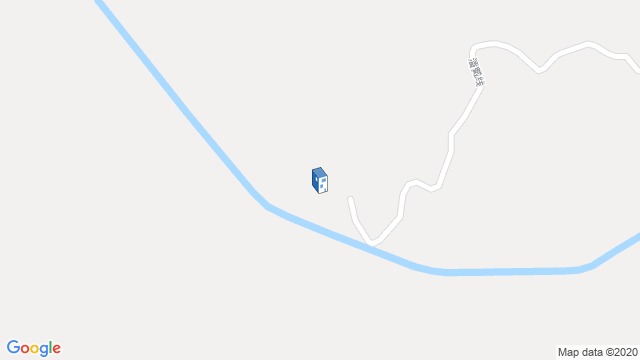 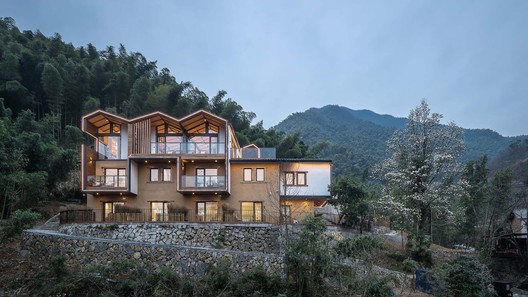