Read more
Save
In Antarctica, Architecture is Heating Up
Share
Or
Copy

In 1773, James Cook circumnavigated Antarctica, representing humankind’s first known encounter with the continent. Ever since, Antarctica has been a vast, formidable, yet curious 14 million kilometer landscape, which explorers, scientists and governments have sought to understand and exploit. Given the harsh realities of building on the continent, aesthetics and architectural creativity have remained an afterthought in Antarctic settlements up until recent years. Today, however, the architectural scene is heating up. 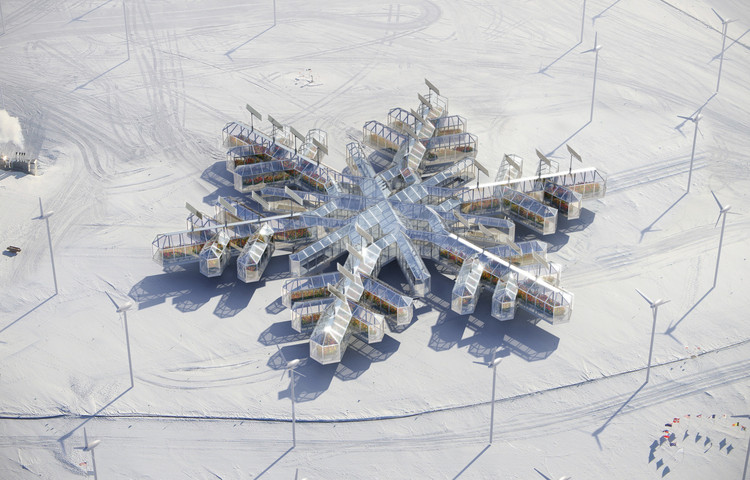 Even though Antarctica covers 10% of the Earth’s surface, the first permanent settlements to be built there were by British explorers in 1902. An improvised typology, often clad with wood and insulated with felt, continued for decades. Given the harsh conditions in Antarctica, where temperatures can drop to 60 degrees below Fahrenheit (-51C) and winds can reach 100 miles per hour, the challenge for buildings in Antarctica has been durability. For example, the Royal Society’s Halley Research Station was built in 1956 but lasted only until 1968, with a replacement steel structure, Halley II, lasting only to 1973. Later Halley editions lasted only 11, 9, and 15 years respectively.

While architecture on the continent in the early to mid 20th century was pragmatic, improvised, and temporary, changing political currents would alter this. The 1959 Antarctic Treaty, signed originally by 12 major nations, declared the continent a demilitarized zone for scientific research. In the decades since, a steadily increasing influx of scientists, tasked with ever-more complex duties and capabilities, has caused an evolution in the architectural landscape. Antarctica, the only continent with no indigenous population, is now home to between 1000 and 4000 people throughout the year, calling for an architecture that begins to respond to human needs and emotions, rather than just the elements.

The most iconic of these is Halley VI, the British Antarctic Survey’s base, designed by Hugh Broughton Architects. The striking, almost Archigram-esque appearance of the station is a departure from the historic makeshift nature of Antarctic bases, with hydraulic stilts that allow the base to rise above snowdrifts. Quoted in The New York Times, architect Broughton reflected on the scheme saying “before these projects were all just about keeping the weather out […] but now these projects are about using architecture as a means of improving both well-being and operational efficiency.” His expertise has since been acquired in the redevelopment of New Zealand’s Scott Base, and Spain’s Juan Carlos 1 Research Base.

A more recent endeavor is Brazil’s sleek Comandante Ferraz Research Station, which began operations in January 2020. Designed by Brazilian firm Estudio 41, the station replaces a previous facility destroyed by fire in 2012. The structure, comprising of two buildings housing laboratories and living quarters, was praised by The New York Times as something that “could be mistaken for an art museum of a boutique hotel.” The evolution in architectural form across Antarctica is also matched by structural ingenuity. While Broughton’s schemes for the UK and Spain feature modular buildings for phased construction, the bof architekten-designed station for India’s National Center for Antarctic and Ocean Research integrates the shipping containers used to transport materials into the design itself. Such considerations are crucial, considering the material supply chain for these bases can last for only 3 months in the summer. The increase in architectural intrigue in Antarctica has been so extreme that in 2014, it became the first continent to be represented at the Venice Biennale.

In total, there are now over 70 permanent research stations across the continent representing 29 countries; a number destined to only increase further. While the Antarctic Treaty prohibits the extraction of minerals from the continent, this clause may be dropped after 2048, opening the floodgates to drilling and mining facilities, and with that, another new architectural typology. Climate Change will also bring significant alterations to the continent, with losses in ice shelves further exposing new lands and minerals for extraction by the rest of the world. Even if the Antarctic Treaty holds, and mining continues to be prohibited, the increasing use of automation and robotics by scientific researchers on the continent will undoubtedly influence the architecture of the region. Could the future architecture of Antarctica be an ever-evolving stream of autonomously 3D-printed units, using materials garnered from the environment itself?

As the human population in Antarctica is only set to rise, the future of the continent will increasingly be tied to that of the rest of the world. So to will its architecture, with designers and architects continuing to play an increasing role in the continent’s changing landscape, responding to the needs of humans, wildlife, robotics, science, and climate. Gone are the days of makeshift shelters with 10-year lifespans – the new architecture of Antarctica is cool, and heating up. 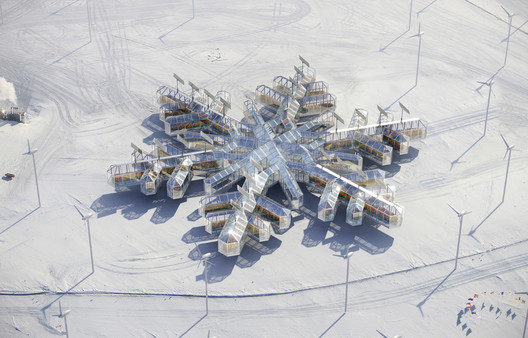