McMurdo Station, the American Antarctic base, was never meant to be a permanent settlement when it was built in 1956, yet today it is home to 250 people full-time in addition to approximately 1,000 summer workers each year. Consisting now of over 100 buildings spread across 164 acres, the settlement acts as a logistical base for field science but is dysfunctional for the scientists and researchers who live and work there and inefficient in terms of meeting the demands of Antarctica’s harsh climate. OZ Architecture has recently unveiled a new master plan for McMurdo that aims to turn the station into a model of American leadership in science, engineering, sustainability, and architecture, condensing the current sprawl into a 300,000 square foot campus composed of 6 buildings. 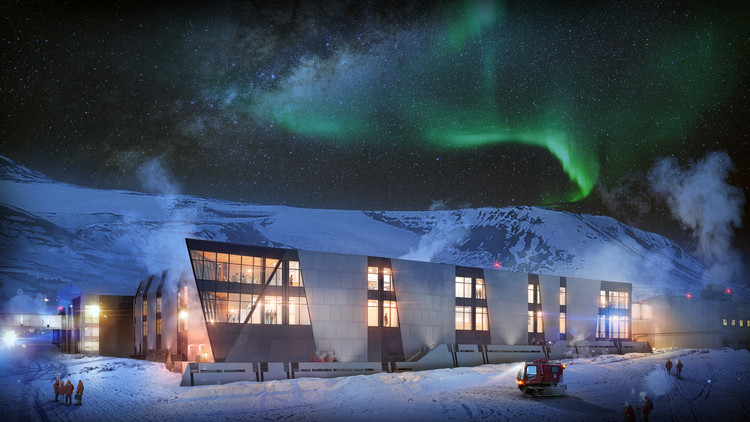 The new McMurdo master plan will greatly improve logistics, energy efficiency, and environmental stewardship. In the current scenario, the unplanned layout of the many buildings means unnecessary exposure to the elements, an inefficient use of time, and increased energy usage and carbon emissions. The new compact footprint, however, will reduce reliance on vehicle transportation as well as reduce material touch-points with materials instead stored nearby to where they’ll be needed.

The design provides health and wellness amenities for the workers that were previously lacking, emphasizing a higher quality of life for residents. To create a true self-contained community at McMurdo, OZ included laboratories, offices, a coffeehouse, a post office, a gym, a barber shop, a store, lounges, and power and water plants. Public spaces are designed to promote collaboration and human connection to combat the isolation of the location; spaces give residents access to fresh air, natural light, views to the landscape, and healthier living habits.

The buildings’ utilization of available natural light has the simultaneous benefit of reduced energy usage for electrical lighting and power generation. Combined with a highly-insulated building envelope, high-performance mechanical systems, improved energy management, reuse of materials on-site, and an expansion of the solar and wind energy-generation sources, McMurdo will highlight America’s continued commitment to sustainability. Due to the extreme isolation and weather conditions, OZ designed the building components to be prefabricated off-site and shipped to Antarctica for ease of construction, which is expected to span approximately from 2019 to 2024.