The stories of the buildings of the United States have been built by the undeniable culture that its inhabitants have been creating. That is why architecture is more than a physical object, it evokes moments that express the wishes of its inhabitants in different political and economic contexts. In all cases, these buildings represent the daily struggle that comes with a monumental legacy of those who lived there.

Different efforts have been made to document the rich history of architecture that has evolved over the decades with different graphic languages. This time, we present an investigation by the NetCredit team showing a list of the oldest buildings in each of the 100 main cities of the United States.

The list ranges from cabins to vast mansions representing 300 years of the landscape built in the United States. The work shows the top 100 cities in the United States supported by data from the 2019 World Population Review. Once this list was completed, the team investigated local media, databases and other official sources to find which buildings were considered the oldest in each city.

In some cases, we contact historical or local heritage companies to obtain additional information or clarifications. We included buildings that had been relocated within the city or nearby areas, as well as buildings that had undergone modifications over the years. However, we do not consider some examples in which the buildings had been so drastically altered making them unrecognizable from what was originally constructed. 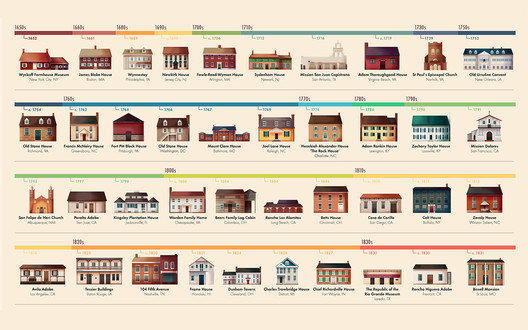