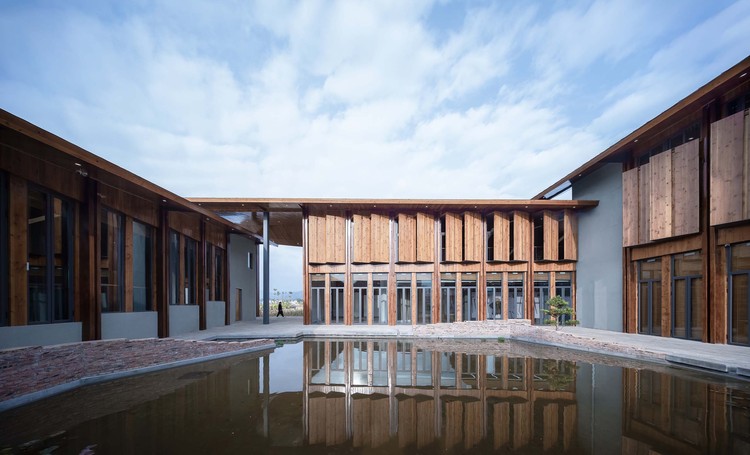 Order
Jiao Ling Cabin is located in the midst of farmlands in the northern Guang Dong province. It is designed to be an open “living room” for villagers, and can be served as an exhibition space.

We experimented a combination of two styles in this project: a common local traditional architecture style– “Wei Long” house, and roof shades built by the locals.

Organization
We preserved the ancestral shrine and the pond to the east of the site, which serve as the axis of the project; and demolished other run-down structures.

The new structure is designed with a “C” shape according to the radial axis, where its southwest corner serves as the entry and northwest corner as exit. The transitional area between the old and new becomes a courtyard.

Water is an important spiritual element for the locals, so we decided to add a shallow fishpond, and in turn, reproduced the place’s original ambience with thoughtful placemaking – a place of spiritual significance.

The cabin uses traditional rammed earth as its skin, reinforced concrete frame as its bones, and T shaped steel beams to support its wooden roof fafters.

Rethink
In addition, we added a couple of interesting features found during our field study – All three roofs have overlapping, slanted roof ridges and soffits. They help to break the monotonous skyline of the village.

The other feature is the progressive transition of facade - the exterior of each bay turns slightly from the next, creating a unique rhythm with the slanted roof.

Cabin
Trying to find the origin of, and the appropriate interpretation of the architectural semantics, we experimented with a variety of ways to understand relationships – spirit, roof, enclosure and ground plane; the connection between the fishpond and its surrounding pavement; different slopes of the roof and their opening percentage; the dialogue between wood, bamboo, masonry; and their interpolation.

We put the building together, with the hope that it will eventually be weaved and absorbed into the dynamic fabric of the country side. 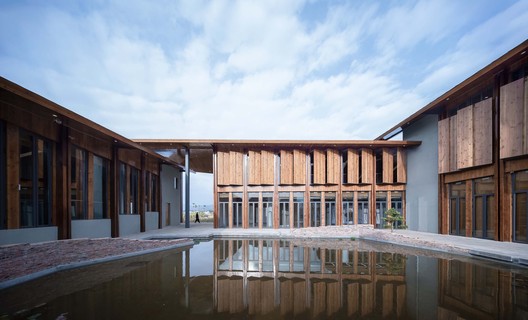