Newton’s Third Law of Motion dictates that for every action, there is an equal and opposite reaction. In urbanism, this concept is evident in how the unprecedented growth of the built environment causes a reaction in rural landscapes. By 2050, the number of people living in cities will have increased by 2.5 billion, representing two-thirds of the global population. This mass flow of people from rural to urban areas gives rise to an equally dramatic flow of natural resources. As can be seen in studies such as Tom Hegen’s The Quarry Series, whose imagery accompanies this article, the extraction of these minerals represents yet another physical manifestation of rapid, linear urbanism. 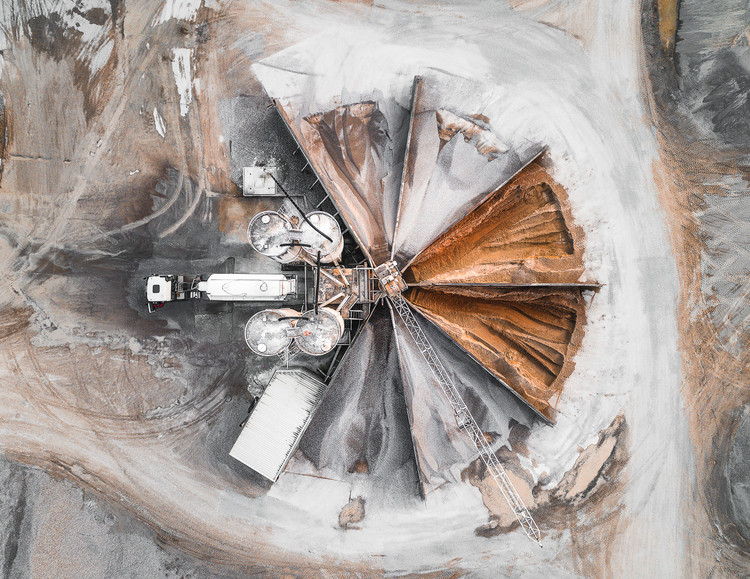 The United States Geological Survey estimates that to maintain our current standard of living, each person in the United States requires over 38,449 pounds of minerals each year (the equivalent weight of ten saloon cars). This includes 9,426 pounds of stone, 6,768 pounds of sand and gravel, 655 pounds of cement, and 142 pounds of clay. There are two dominant methods of extracting these minerals: underground mining and surface (open pit mining).

In underground mining, higher-grade metallic ores are extracted from between 200 feet (60 meters) and 2,500 feet (750 meters) under the Earth’s surface. Underground rock is drilled and blasted, then moved to the surface by truck, belt conveyor, or elevator, where the raw material is sent to a mill to separate ore from waste rock. In surface (open pit) mining, as demonstrated in Hegen’s series, rocks and minerals are extracted from near the Earth’s surface without the need for tunneling. Raw materials derived from surface mining typically include coal, copper, gravel, stone, granite, limestone, and gypsum.

While these methods of extraction have existed for centuries, the rate at which we consume raw materials from the Earth has grown exponentially throughout the industrial era. At the beginning of the 20th century, the United States consumed 134 million metric tons of raw materials. By the end of the century, this rose to 3.56 billion metric tons, more than a 26-fold increase, and more than 2.5 times the rate of increase in the US population over the same period. Meanwhile, the share of raw materials derived from renewable sources, such as wood, fibers, or agricultural products, declined from 50% in 1900 to just 8% in 2000.

This rise in demand for unsustainable raw materials is almost entirely attributable to an increase in demand for sand and gravel through the 20th century, as industrialized countries rapidly expanded inter-state and inter-city highway systems to support an equally-rapidly expanding urban environment. As the explosion of car usage led to the construction of steel bridges and concrete freeways, the number of occupied housing units in the US grew from 16 million units in 1900 to 107 million in 2000, while the area-size of units doubled over the same period. Today, the mining industry that feeds this growth in the United States is an $86.3 billion per year business, supporting soaring demands for food, clothing, and shelter.

Understanding our heavy reliance on raw materials, almost always extracted from locations far away from the cities they build, we see how the flows of materials, resources, and energy that are required to sustain a city far outweigh the city’s geographical footprint. London, UK, for example, requires an area of land 125 times its size in order to sustain its food, mineral, water, and energy needs according to a 2003 report by the Greater London Authority. Increasingly, the rural areas surrounding cities have become landscapes of extraction, whether it be mineral needs as detailed in this article, or food needs, as detailed in a previous article of ours exploring the vast greenhouse landscapes of the Netherlands, the world’s second-largest food exporter.

The extraction of these materials once allowed for the mutual exchange of commerce between cities and countryside, where urban demands supported rural employment and industry. However, the undeniable trend towards automation in these industries means the relationship between cities and countryside is increasingly one-directional, with urban areas autonomously draining non-urban areas of resources with no reciprocal benefit. Equally alarming is the ultimate fate of these landscapes of extraction in their post-use state. Farmlands become deserts, devoid of minerals or planting, while the open-pit mines discussed in this article are destined to become dangerous deep-water lakes, or ironically, rubbish landfills used to dispose of the very minerals they were originally exploited for.

The future of urbanization poses an uneasy question over non-urban areas. Such a question has also occupied the work of Rem Koolhaas and AMO as of late, with their Guggenheim exhibition “Countryside, The Future” investigating the urgent environmental, political, and socioeconomic transformations of non-urban areas. Shifting from the contemporary city, Koolhaas says of the exhibition: "In the past decade, I have noticed that while much of our energies and intelligence have been focused on the urban areas of the world, the countryside has changed dramatically under the influence of global warming, the market economy, American tech companies, African and European initiatives, Chinese politics, and other forces.”

While the future of the countryside will rest in part on the future direction of these global market forces, the future course of extraction for architectural needs will also be impacted directly by architects and design teams, and the materials they specify for construction and finishings. With rapid developments in industries such as mass timber and fibrous 3D printing, which considerably lessen the demand for unsustainable mineral extraction from the Earth, perhaps a responsible relationship between cities and countryside will unfold, balancing urban needs with non-urban cycles.

Regardless, it is clear from both the analytical data, and tangible imagery such as Hegen’s, that all industries, including design and construction, require a revision in their use of raw materials. While Newton’s Third Law of Motion may encapsulate the effects of urban development on rural landscapes, there is also a warning in his First Law: “objects remain in uniform motion in a straight line unless compelled to change their state by the action of an external force.” Without new ways of thinking about how we use raw materials, we will be compelled to continue in a linear trajectory towards exhaustion.

The images which accompany this article are the work of Tom Hegen, and his project titled "The Quarry Series." More images can be found on his Instagram handle @tomhegen.de and his official website here. 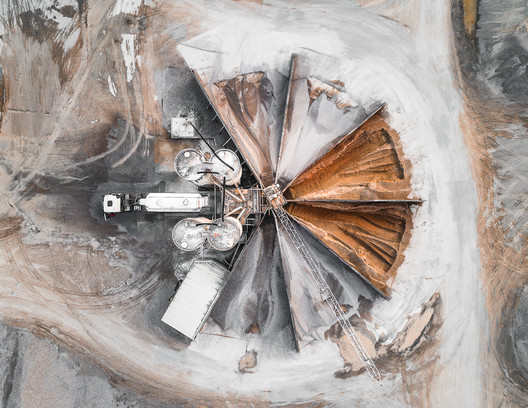