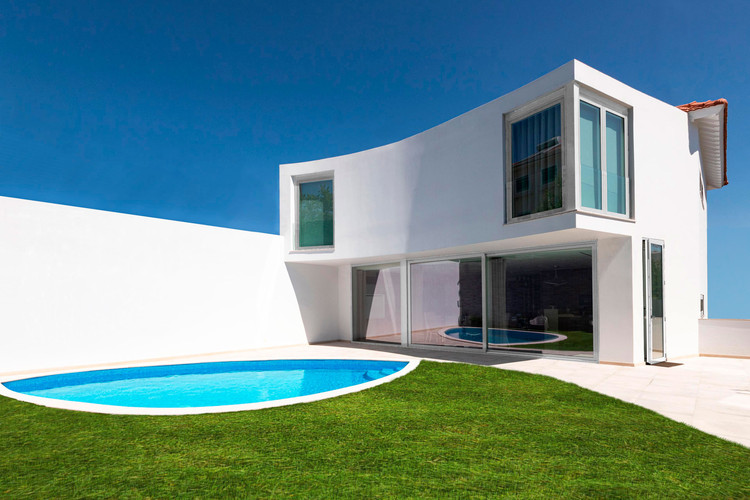 Text description provided by the architects. In the eastern part of Lisbon, with panoramic scenery to the boulevards of white and black poplars, the House in Lisbon appears, a single-family dwelling plot overlooking the Vale do Silêncio.

With the aim of remodeling his house, built between 1939 and 1945, the client turned to the services of Bruno Câmara Architects, who conceived the project House in Lisbon, whose concept is defined by an oblique backward plane continued by a curved plane, thus involving the facade.

The two-storey house, previously with little habitability, due to the various rooms with little area and poor lighting, gains a new life and dynamics. By keeping its main facade and ceilings intact, the project preserves the traditional aspect of the neighborhood in which it integrate, without neglecting the surprise factor of contemporary architecture. The expansion of the semi-detached house, focused on the backyard, highlights the insightful view over the Silence Valley by creating an extension from the outside to the inside, while giving it privacy.

With only a change in the lateral and rear structure, the house gained a new flat roof body, which aligns with the roof of the pre-existing house, thus creating a hybrid of architectural contrasts. The facades, defined by the obliquity, are adjusted to frame the patio, the Vale do Silêncio and the swimming pool, still allowing the entry of zenith light.

The House in Lisbon thus introduced in the Bairro da Encarnação singularity, change and contemporaneity, despite the conservation of the dynamics of urbanization, simultaneously attributing innovation and heritage to the same building. 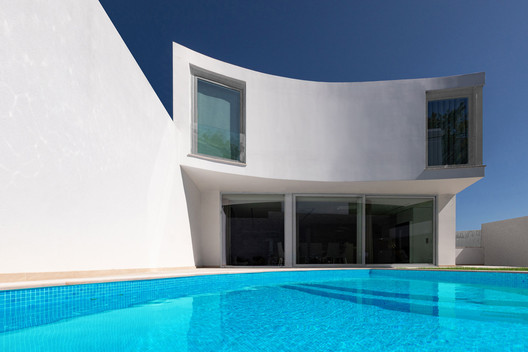