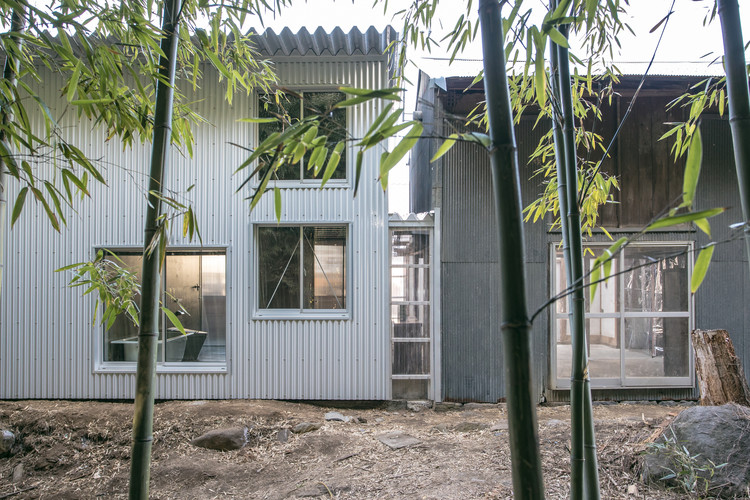 Text description provided by the architects. A small factory in Nagano was converted in to a residence. The client is a couple returning to their hometown with their 2 small children to live next to their parents. The site had two buildings side by side, an old farmhouse and a small factory. The parents now live in a house right in front. The request was to renovate this old farmhouse that they had a strong attachment, so they could live and in the future hold fitness classes. Through research, the farmhouse had been renovated several times and its condition was not suitable for actually living. The factory, on the other hand, was a 38 years old and its steel structure was in good condition. The farmhouse and the factory were a continued space without any separating walls, resulting in a generous space with different times and backgrounds connected.

In utilizing not only one of the two buildings, but both and keeping them side by side, we saw the future of this family and the potential of this rural area with gradually growing building stock. It was different from the initial request, but we proposed to convert the factory to a house and the farmhouse to a large windbreak room, respecting the current condition of the farmhouse.

Factory→House: How to secure a certain scale of place which the clients could attach themselves and make it into a comfortable space inside the empty factory. we interpreted the earthen path, the main circulation of the farmhouse, as a “spine connecting the two buildings”, and extended it into the factory in a single span as if the new and the old were woven together. Materials were selected under the concept of a space where different flows of time coexist. While the space is divided by the heavy walls, light partitions connect the other space. Some of the openings placed intermittently are shared between the upper and lower floors to create a path of wind and light. we aimed for a space where each other’s presence is sensed in a “close yet far, far yet close” way.

Farmhouse→Windbreak room: How to create a space like an “engawa” utilizing the existing structure in a cold region. By replacing some parts of the roof and the exterior wall with polycarbonate sheets, the farmhouse was renovated to a bright 30 sq. m. windbreak room. When the double doors of 2.7m wide are fully opened, wind passes between the bamboo forest on the east and the parent’s house on the west and the room becomes an open gathering place. The room works as an environmental device that breathes according to the changing situation. It was also intended to become a buffer zone for the life of this multi-generation family, an “additional house outside of the house”.We hope these two buildings will age gradually, get the resident and the local people closer and connected, and become the foundation for a rich “rural life”.