A team of five firms have come together to design the first large-scale timber building in Western Australia. Lyons Architecture is working with Officer Woods, The Fulcrum Agency, STH and Aspect Studios on the new academic building at Murdoch University in Perth. Constructed from locally sourced timber, the four-story project will include offices, learning spaces, and informal gathering areas. 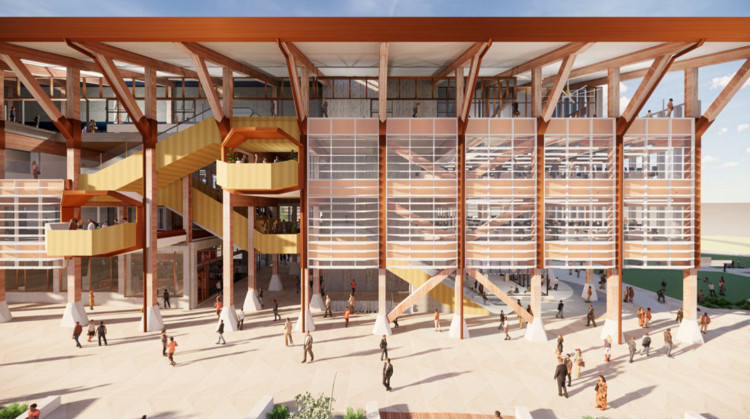 Designed to encompass 15,000 square meters of program, Murdoch's new academic building will house the university’s School of Business and Governance. The project is inspired by the modernist architecture of the existing campus by designed Gus Ferguson, incorporating a gable roof alongside contemporary construction systems. "The existing campus has a coherent architectural character of linear masonry buildings framing native landscape courtyards. These courtyards are typically bordered by long colonnades that form the primary circulation network of the campus and are protected by generous gable roof forms.”

Five existing buildings will be demolished to make way for the new construction. The academic project is made as a "creative warehouse" that features flexible partitions, and a new arrival court will act as the main entrance to the campus in the south. No timeline for completion has been announced.