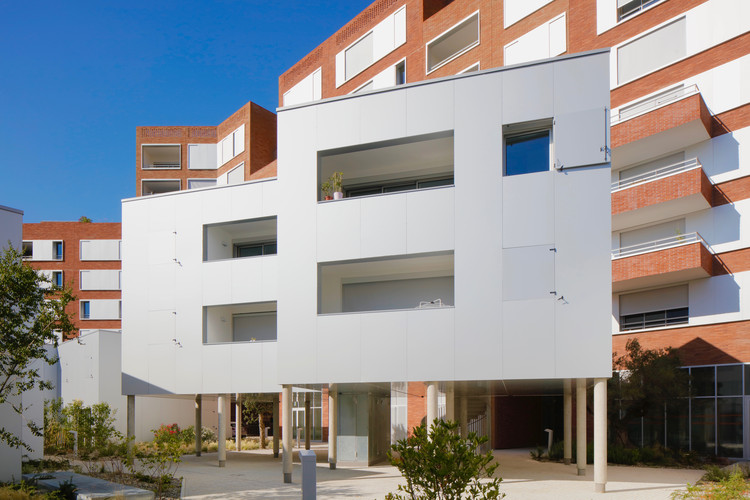 Text description provided by the architects. Building on an exceptional site. In a key position between the old suburban neighbourhood and the urban fabric formed by the Allées Charles de Fitte lanes, the site is opposite Toulouse's emblematic Abattoirs museum. The position is exceptional, with open, far-reaching views over quality green spaces (the Raymond VI gardens, the centre of the city block, and the river Garonne) and the historic city centre. It is very visible, marking the extremity of the row of lanes and the corner where they meet the Rue de Bourrassol. Different scales. On an urban scale, the project assumes a position and massing that seeks to continue the range of existing scales of building, completing the city block: On the lanes, the large scale of the neighbouring 11-storey building. Rue de Bourrassol, the 7-storey apartment buildings. At the centre of the block, the 2- and 3-storey suburban houses. On the scale of the boulevards, the fragmentation of the volume creates a varied relief from 6-storey to 9-storey. The facade on the lanes side is sequenced by a play of occasional full-height returns, creating the impression of five attached buildings and establishing the individual identity of each. The preserved historic facade is integrated into the overall composition. On the ground floor, two undercrofts lead through to the centre of the block, ensuring the preservation of the historic Abattoirs passageway.

Housing. In the apartment buildings, double-aspect or full-depth configurations facing east, west and south are prioritised for the large units (2-, 3- and 4-bedroom). These principles, fostering the orientation (sunlight and views) and ventilation of each unit, produce quality apartments that meet the latest environmental standards. Each unit has access to an external area equivalent to 20% of its habitable space. At the centre of the block, the 'suburban houses' contain split-level 3-bedroom housing units with a private garden, orientated away from the street-side buildings. The central plot is left free to provide enjoyable space for residents. Identity. The terracotta facades are pierced with large openings to capture the best views and orientations (low window breasts, openings without lintel returns). The regularity of these openings accentuates the impression of verticality and sequencing. The openings are grouped by unit to establish clusters of windows and blinds on the facade. This minimises the proliferation of multiple openings inherent in apartment buildings. The facade works on the scale of the public space that it delimits. At the centre of the block, the facades are animated by the simple alternating of panels and windows. The openings are positioned so as to orientate the volumes and minimise overlooking neighbouring buildings. With the shutters closed, the ensemble reads as a single, monochrome volume. Rational and longevity. The building system based on load-bearing party walls and in-filled facades is simple and rational so as to be economical.

In keeping with the surroundings (the Abattoirs contemporary art museum, ramparts, etc.), the street-side buildings are faced in terracotta brick slips in natural red-orange tints. The colours vary slightly to reinforce the outline of the buildings. The windows are in anodised aluminium, the contrast of its smooth and silky finish with the rough, matte bricks reinforcing the contemporary feel of the project. At the centre of the block, the platform-buildings are dressed in matte aluminium panels. The ground is covered in grey granite, a nod to the traditional Toulouse courtyard, and serving both as access to the housing at the centre of the block, and as communal space for the the residents. 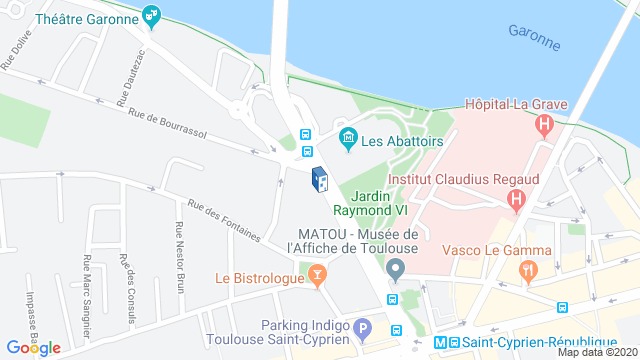 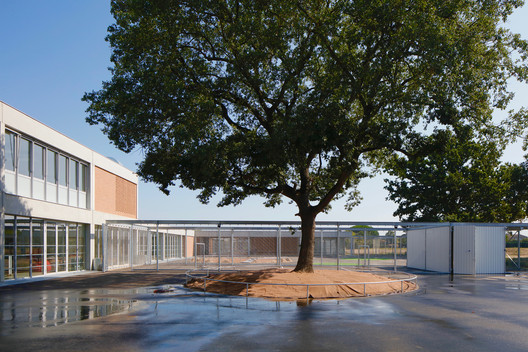