Text description provided by the architects. As an ancient poem once said: “So many noble lords are strolling here, whose clothes still carries the smell of royal incense burner." It is Longfu Temple that has witnessed the past bustling and prosperous Beijing city for centuries. Until the rapid development of city has hidden its glory into towering skyscrapers, people go hastily with the new tide of city. Longfu Building, which was a popular Beijing landmark, can be only glimpsed in the houses of Hutong occasionally. With traces of time deeply imprinted, it stands silently, accepts oblivion, and awaits new life.

This year, as the transformation of Longfu Cultural Center is completed, the quiet hall of temple wakes up again in steel and concrete framework after several years of dreariness, continuing to write its chapters in this ancient city.

Choice · Unexpected Rebirth
Located at the top floor of Longfu Building, the palace has no longer been grand after several times of changes in the past few decades, and this transformation has once again given Longfu Temple a new mission. History is irreversible, but the present can be completely rebuilt. Therefore, after undertaking the renovation project of Longfu Cultural Center, Wan Xiang Design abandoned the old-fashioned scheme and only retained the ancient building frame. All the façade, roof and courtyard were completely rebuilt.

This small project has lasted for four years.

The ancient history has brought Longfu Building glory and stories, as well as regret and shortcomings. The load capacity of the top floor is extremely limited, so it is unable to load a true royal garden. What’s more, four huge smoke exhaust shafts firmly occupy the main traffic nodes of courtyard, just like the stubbornness that an old man refuses to cut out.

As a result, light landscapes, thin water covering, lawn flower boxes, and few pine bamboos are used to form this current simple and restrained modern courtyard. The smoke exhaust shafts were wrapped by brick and stone in stagger arrangement. The lights at nightfall flowed through the ventilation holes, like the moonlight swaying in well. Regret and rebirth are only one step away.

Understanding · Protecting Tradition
The three coffers that survived in the Zhengjue Hall of Longfu Temple are now displayed in the Museum of Chinese Ancient Architecture. The high-angled corner hall and 45-degree inclined beams just leave a space hanging above in the ceiling, waiting for a modernist restoration.

The complicated patterns of algae, lotus, cloud and stars were removed, and the simple beams were rotated and raised to the top according to traditional building system, and it finally restored the rigorous and magnificent appearance of coffer with eight beams.

The flat roof structure of the east and west wing-room is covered by a small, regular square coffer, revealing solemnity, simplicity and amiability. It also conveys the respect to tradition from contemporary design.

Ancient man-made coffer shows human expectation that "water in the well" would save the wooden structure from fire, but unfortunately Longfu Building had still suffered from fire disaster. In the new transformation, all wood finishes have a very high fire-protection rating. Traditional romantic imagination can now be protected with superb craftsmanship and first-class materials. This is one of the profound meanings of modern methods.

Blending·Role Interpretation
For Longfu Temple, copying or subversion is not the best rule for reconstruction. The hall is traditional while the courtyard takes the artistic conception. Within the modern concrete structure frame, the floor in the hall still follows the ancient method of the Palace Museum. The special mud are made from several days of settling and pressing.

Outside the hall, the light highlights the eaves beams and pillars, illuminates the walkway, and also depicts the mood behind the stones and landscape. Inside the hall, light is the narrator instead of the human voice, in which the building components and graceful ceilings are fully reflected.

Through the main hall, a lot of blank space begin to spread in sight, and the course way carries on the tradition behind it in a modern sense of simplicity and rationality, bordered with the contemporary design. The color and texture also give modern materials a profound charm.

In the hall, contemporary art from the East and the West blend with each other, and ancient architectural patterns are rubbed on it through sunlight. The silent dialogue between old and new is naturally opened. When listening to it, one will have a penetrating understanding both in body and mind.

Witness·The Change of Old City
At sunset, when looked out from the view windows in the east and west red walls, the black-grey houses are closely arranged in the old city, and the golden sunset glory is reflected on the high-rise CBD glass walls at the end of sight, while the rest is shining through the roofs in old city. This is a unique and beautiful scenery on the east-west viewing axis. At this moment, the ancient and new city seems to overlap to form a mirage that belongs to Beijing.

A weathered building has rouses itself and the modern people with exquisite craftsman has cleaned the dust and put on new clothes for it. We tried to open it and reshape it, but we were afraid that it would be incompatible with present needs. Until now, it has reappeared, and it has become even more elegant. Standing inside, we realized that not we are watching it, but it is watching us. 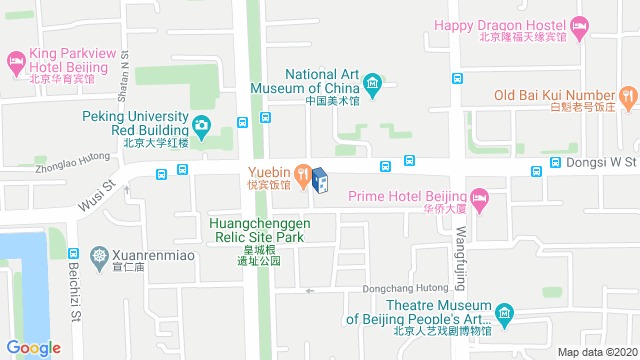 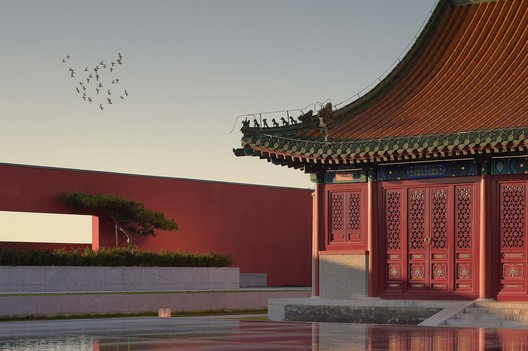