Text description provided by the architects. The Glass Ribbon. A well-built semi-detached house, typical of the suburbs of Dublin, dates from the 1930s. Through the years, the house had suffered from poor alterations and additions though many of its fine but modest details of the period survived. Aside from its well-proportioned rooms, the house’s best asset was a triangular south facing garden adjacent to its largely blank side gable.

In extending and re-planning the house, the design proposals continue the tradition of axially related rooms in an enfilade arrangement. The generously sized entrance hall is reinstated as a panelled reception-room so that there are no corridors, one moves through the home from room-to-room.  An undulating ribbon-of-glass is draped along the southern gable wall, which is opened up to redirect the axial room relationships towards the garden. The glazed extension, modelled on a traditional conservatory or sun parlour, is a thin steel-framed wrapper that houses dining areas, a study and a route linking a drawing room via a small lightwell.  Intended to be furnished with indoor and outdoor plants on the thick sills inside and polished white concrete ledges outside, the new rooms are delicate and lush in contrast with the handsome solidity of the main house.

The original house was given its soul back through careful attention paid to the restoration of the original features, with an almost imperceptible transition from the old into the new. The new additions such as the panelled hallway, scalloped timber linings and the oak stairwell are custom designed by the architect, and are intended to appear such that one can imagine that as they’ve always been a part of the house. The interiors are redecorated to feel calm and sober whilst retaining some of the playful materiality of the period, with new elements based on what once might have been. 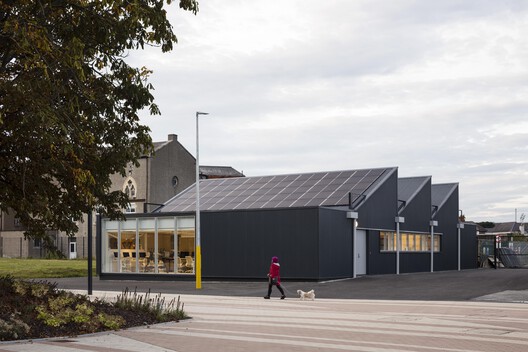