Sidewalk Labs have released their latest study, called Proto-Model X (PMX), investigating how tall timber buildings could work in cities. As a digital proof-of-concept for how to design and manufacture a tall timber building, the study follows the team’s announcement last June to design the world’s first all-timber high-rise neighborhood on Toronto’s eastern waterfront.

As the team stats, “timber is staging a comeback in the form of a new fire-resistant super wood known as mass timber, a building material made of wood pieces compressed together in a factory to create thick beams, columns, and panels.” PMX would be approximately 2.5X lighter than its concrete counterpart, featuring a 70-ton steel tuned mass damper to reduce lateral sway and a series of “Floor cassettes” that can each produced in 25 minutes on an assembly line. To explore how factory-produced timber buildings can grow taller, the team designed a mass timber proto-model at 35 stories — a height that’s yet to be achieved in practice.

PMX was developed through collaboration with a team of architects, engineers, and environmental designers, including Michael Green Architecture and Gensler. Together, the team aims to advance the building idea through eight key steps for a basic building design. Exploration 1 details how to design a timber building that can reach 35 stories, while Exploration 2 looks at how create a timber building that’s easy to make in a factory. 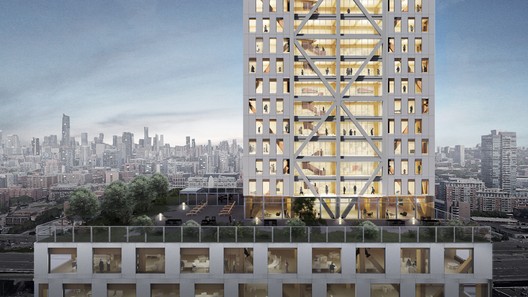