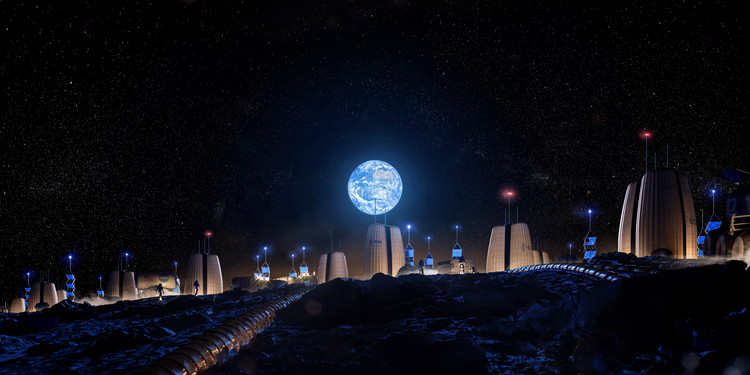 The Memorandum of Collaboration will build on the existing work between SOM, ESA, and MIT. In fact, the two-year partnership, focused on developing “the concept for Moon Village, as a framework for the first permanent settlement on the lunar surface […] with large habitation modules with inflatable structural shell technology emplaced on the rim of Shackleton Crater”. The teamwork imagined the large-scale development near the Moon’s South Pole.

The cooperation between ESA and a global company such as SOM is a very good example of the spirit of the Moon Village concept: an alliance between private and public, space and non-space entities that will enable going forward to the Moon in an inclusive and sustainable manner. -- Johann-Dietrich Wörner, Director General of ESA.

On another hand, the newly signed agreement will introduce a more focused study on the development of the settlement’s habitat modules. Once completed, it will be publicly released in order to inspire “technological developments related to long-term and sustainable exploration of the lunar and Martian surfaces”. Interdisciplinary, the Moon Village concept is designed by SOM, with the expertise of ESA’s European Astronaut Centre (EAC) and the European Space Research and Technology Centre (ESTEC) with the support of faculty members from MIT’s Department of Aeronautics and Astronautics.

Our partnership with ESA represents a new way of approaching the industry’s most complex problems, […] and we’re thrilled to celebrate this milestone, which will take our collaboration to the next level. Together, we are creating a new kind of architecture – one that can sustain human activity in a place that was, up until now, considered uninhabitable. -- Colin Koop, Design Partner at SOM.

Regarding the design, the hybrid structural system is composed of a rigid frame of three columns and an inflatable structural shell, generating an open and free interior. With four pressurized levels, the modules can house four to six people. The habitats will be grouped into connected clusters to facilitate motion.

Envisioned to withstand the extreme conditions of a lunar environment, with a central focus on self-sufficiency and resiliency, the new settlement will be located at the south pole of the moon, under continuous daylight exposure. Due to these conditions, the settlement will be able to “harness energy and set up the required life support systems, as well as in situ resource utilization (ISRU) experiments, which could generate useful elements using the Moon’s natural resources”. Moreover, water-ice deposits could be extracted to produce breathable air and rocket propellant for transportation and industrial activities. 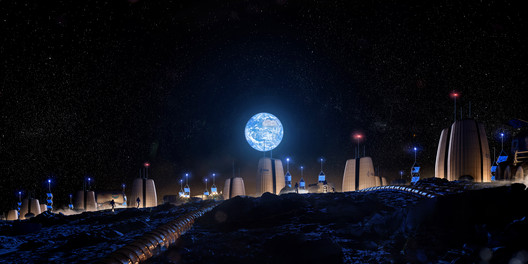