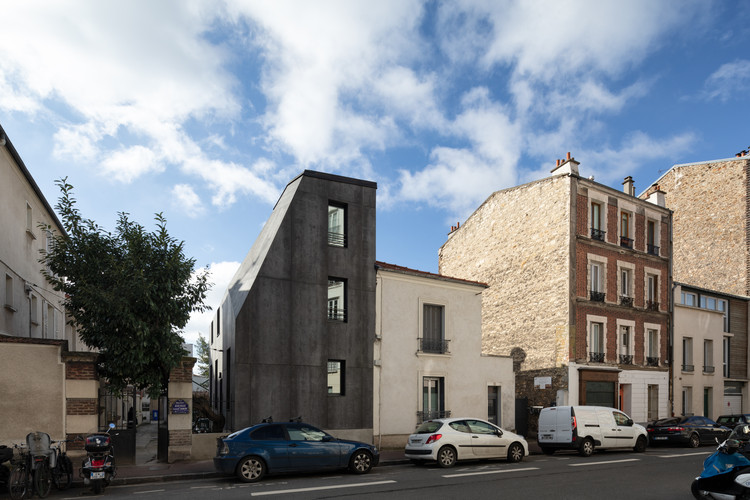 Text description provided by the architects. The project of the house V is a private order for the renovation and extension of an existing house in Malakoff in the Parisian suburbs.

The two-level existing house is made of brick facade, and a tile roof. It lies between an avenue and a private road, giving it a particular orientation, the smallest facade overlooking the avenue.

The project was to expand the house to be able to accommodate either a family or a group of active young people. Two levels were added around a staircase, hosting 3 additional bedrooms, one new bathroom, an open space with a living room and a kitchen and a playroom.

The structure of the extension is made of steel, independent of the existing building. The facades are made up of a wooden sub-structure, aluminum windows, and is insulated from the outside. The façade covering is made of Viroc plates, a composite material consisting of a mixture of wood particles and cement.

Tectône made the choice to cover the existing part of the building with the same Viroc plates giving a sense of unity to the whole. From a volumetric point of view, the choice was made to break the angle between the avenue and the private road thus allowing a better integration in the surrounding urban fabric.