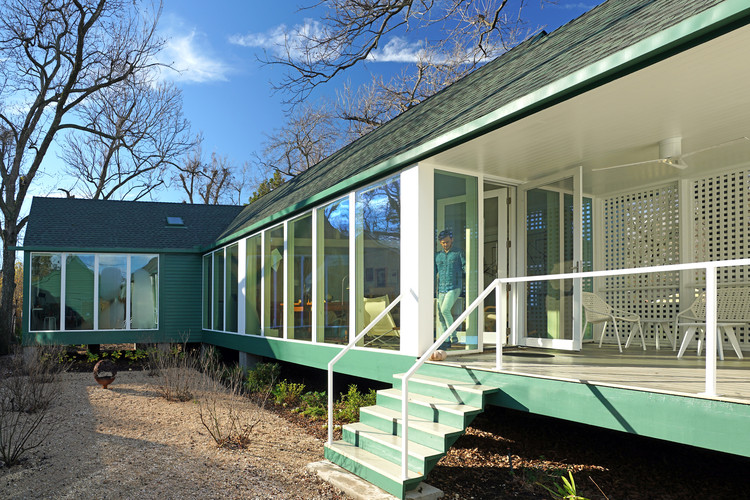 This house is located in one of Houston’s last intact, nineteenth-century, working-class neighborhoods—the Near Northside—about one mile north of downtown. While perhaps not conventionally attractive, the Near Northside’s collection of well-used Queen Anne and Folk Victorian worker’s cottages offers lessons on how old buildings can be adapted to new uses and increased density instead of simply being replaced. We took this ethos of economy into consideration for the design of a new house on a lot that had always been vacant and approached it as a prototype for future infill houses in this rapidly gentrifying urban area.

At the front of the house is a detached 500 sf building that serves as our architectural office. We planned so that it could either be incorporated into the rest of the house or converted into an accessory dwelling unit for rental by future owners. Adjacent to the studio, also facing the street, is a carport with a storage closet. The actual living area of the house of 1500 sf extends in a line to the back property line behind the street-facing studio.

The studio and the house are joined by a dog trot porch. Because the house is long and narrow, the east-facing side yard becomes the primary garden space. The walls of the house facing the garden are composed of rows of inexpensive 3’-6” wide by 8’-0” tall vinyl windows. Operable, aluminum casement windows, 3’-6” square, are aligned on axis with the main door (all equipped with bug screens) to provide for cross ventilation in good weather. Direct views from the street to the garden are modulated by the carport. The house and roof are dark green, which simultaneously blends with the vegetation and stands out in a street of white and pastel-colored houses.

We wanted the new house to respect the gentle scale of the modest surrounding urban fabric but to speak in its own contemporary voice. The idea was for it to sit quietly but also engage in a respectful dialogue with its older neighbors. The typologies, materials, and spatial patterns of vernacular building on the Texas gulf coast inform its design in specific ways. These include the long, narrow shot gun house floor plan; dog trot connecting porch shielded from the west sun by a screen of wood lattice, 4’ tall, pier and beam foundation, steep-pitched, gable roofs; and beveled exterior siding made of East Texas yellow pine. At a more basic level, Houston’s subtropical climate played a role in its planning.

The variety of covered and open outdoor spaces interspersed between the air-conditioned areas can be used year-round, in sunny weather and in rain. We mixed references, both rural and urban, and traditional and modern. There is an intentional ambiguity in its appearance because the massing and many of the materials, which are sometimes all-but-identical to the other houses in the neighborhood, are deployed in such unconventional combinations.

Our model for this dialectical approach, which seeks to reconcile modernity with history, was that taken by Houston’s most significant cultural patrons of the twentieth century, the French- American art collectors Dominique and John de Menil. In their major architectural commissions, they synthesized the best aspects of high and low culture to create a distinctive identity. Their best-known project, the Menil Collection building (1987), designed by Renzo Piano, is a good example. It is a large museum situated in a neighborhood of 1920s bungalows. Because it takes cues from its neighbors—a lawn in front, big porch, and simple massing—it appears at ease among its much smaller neighbors. By following this responsive model, we believe we have provided another example of sympathetic building attuned to its unique place and time.
This was a design-build project. 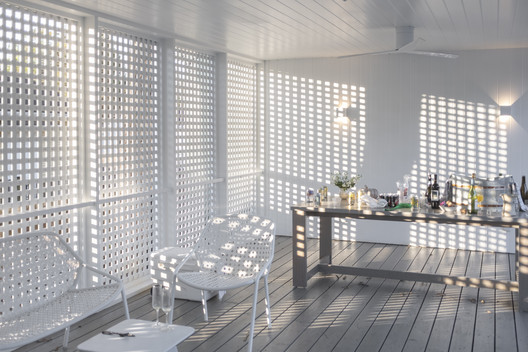