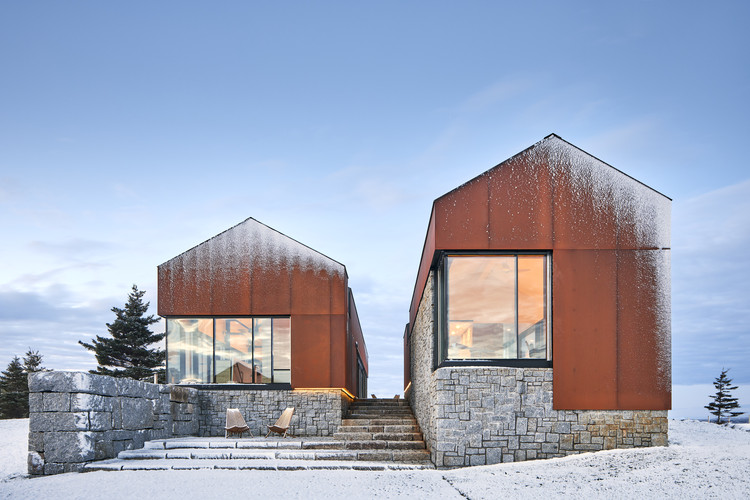 Text description provided by the architects. Smith House is a vacation home located on the Atlantic coast of Nova Scotia, adjacent to the architect’s farm (Shobac). The home consists of three pavilions on a two-acre site spanning from a salt pond on the east to a bold oceanfront on the west. This small peninsula historically supported an inshore fishing port.

This is a proto-urban project, forming a village, together with other houses designed by the architect, on the old fishing village site. The reconstituted village is dense, requiring careful handling of views both from and to each building, in order to optimize community and privacy. Multiple courtyards are framed between the structures, creating micro-climates that both catch the sun and block the wind, following the seasons and daily rituals of dwelling.

The village is created by the careful aggregation of simple gable-roofed forms, producing an effect that is greater than the sum of its parts. While these traditional forms echo local vernacular buildings, they are made absolutely modern through their cladding, fenestration and minimalist detailing. The house is perched on a stone acropolis, like a ruin, protected by Corten steel plate roofs. The stone plinth is constructed of local granite, brought to the place by retreating glaciers during the last ice age, over 15,000 years ago. Deeply local, it is also the foundation material traditionally hand-split for the construction of all of the nearby historic ruins.

The landscape procession toward the project begins on gaining a hilltop overlook of the village on arrival. Then, the procession is pinched by a pair of reconstructed historic buildings. Then, the road is framed by agricultural fences. Then, one passes by a granite retaining wall below the project. Then, one swing around the gatehouse shed. Then, between the shed and pavilions, a view is framed back toward the Shobac Campus. Then, one winds up a monumental granite stair, squeezing between the day and night pavilions. Then, one arrives on the granite plinth, framing a view to a distant lighthouse. Finally, the visitor enters the compressed foyer of the day pavilion.

At a time when so much of our world is in flux, this is a project that is about timeless archetypes, rather than novelty or fashion. It is less about itself than it is about the landscape cultivated around it.  Smith House is more about resolution than a novelty; more about being ‘good’ than being ‘new’. It is a mature expression of a body-of-work, or architectural language, developed over forty years. This project really began in 1994, when the architect and a group of his students constructed the first Ghost project, as a translucent tent over a 400-year-old granite ruin adjacent to the new Smith House. In 2016 the architect made an idealized ‘restoration’ of that ruin, as a sunken skyspace for dining. The Smiths’ initial request was for a house design that referred to that local, historic ruin. 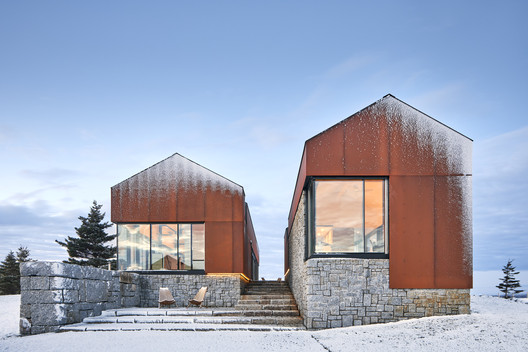