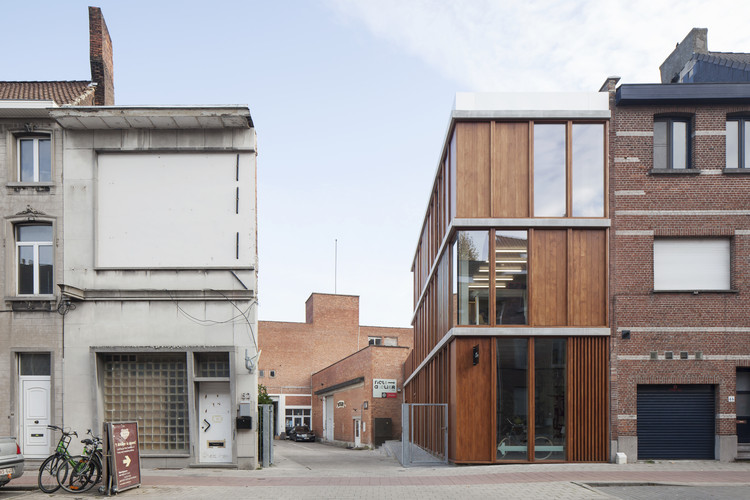 ‘t Atelier is a social enterprise in Mechelen (Belgium) that employs people who don’t easily find a job in the regular job market. It consists of a bicycle repair shop and a wood workshop and is situated on a plot where the Public Centre for Social Welfare and the Youth Center of Mechelen reside. Since the bicycle repair shop was bursting at the seams, they purchased the house adjacent to the entrance of the plot. The existing house and the workspace at the back form together an L-shaped plot that is bordered by gardens, the wood workshop, and a meeting center.

As the new building is located at the entrance of the busy inner area, dmvA made a design that engages in a dialogue with the public passage and at the same time visually connects with the facades of the neighboring houses in the street. The base of the building is a concrete structure of columns and floor slabs, based on the Dom-Ino house of Le Corbusier. All the techniques such as electric cables, floor heating, and ventilation were incorporated into the concrete slabs. The structure of the building is filled with a playful framework of glass and exterior wooden joinery, showing the competence of the workshop. The bicycle store was installed on the ground floor with the repair shop at the back. On the first floor, there is an office space and on the second level, there are meeting rooms provided.

The new building is the first step in the development of a social network in an area nearby one of the poorest districts in Flanders. This is an extra incentive for the government to invest further in the neighborhood after all the efforts made by ‘t Atelier. The nearby area of the site will be expanded with 300 houses and has, therefore, a lot of potentials. Participation was one of the biggest cornerstones in the socially engaged project. Twenty years ago, dmvA was one of the first to believe in the sheltered workshop ‘t Atelier and integrated various woodwork projects from ‘t Atelier into their designs. From this, a bond of trust originated between the architect and the client and it resulted in a number of collaborations. For the new building dmvA also had the wish to collaborate intensely with the people from the wood workshop with the aim to highlight the woodworkers’ ability by constructing their own building. All the joinery, from interior to the exterior, was developed in wood and was designed in such a way that it could be executed by the atelier itself. The flexibility of the concrete building structure made it easy to be filled in by ‘t Atelier. This resulted in a fantastic work process between the client and the architect, both striving for a high-quality outcome. The pride of the people of ‘t Atelier was the cherry on top. 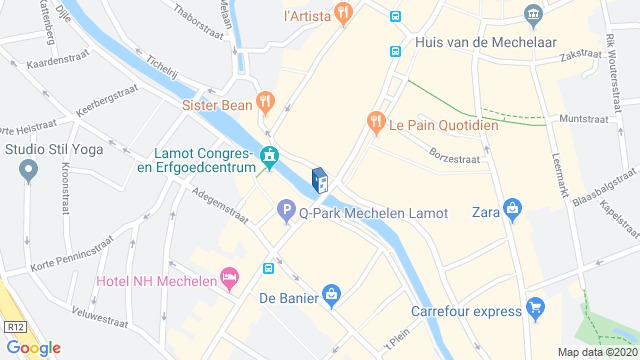