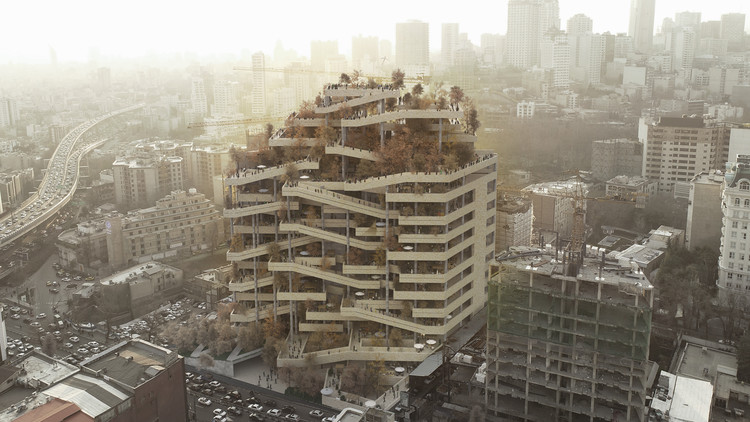 From temporary Bazar in public spaces to malls, shopping is part of Tehran’s resistance routine culture. Located in one of the city’s main streets, Shariati Street, the project tried to replace the missing CBD. The North-to-South main arteries have a very critical role in the contemporary growth and development, forming multiple shopping scenarios. In fact, the proposal builds on the major role of the streets, connecting the Grand Bazar to the wealthy part of Tehran.

The existing large structure, designed initially as a mall with nine floors of retail, “will not survive in that context”, because of opposite shopping behavior and the massive scale of the program. Although shopping malls perform in general according to the capacity of parking and car accesses, in this situation, “the survival of the structure depends on the interaction and connection of people with the shop”.

FMZD or Farshad Mehdizadeh Design imagined a vertical street to replace the traditional packed shopping mall. Dividing the building into two parts, the outdoor vertical open space is a continuation of the public realm with small scale retail units, whereas the indoor area holds a department store. The main facade of the building is, therefore, open to the public, bringing activities to a whole new level of the structure. Inspired by the behavior of shopping streets, the project allows people to go to the top where a panoramic view of the city is unveiled.

The structure not only performs as a separate large scale unit that is injected into the context, but it is responsive to the city interactions and works as a part of the street circulation and walkway vertical growth with the small scale shops and retails. -- Farshad Mehdizadeh Design 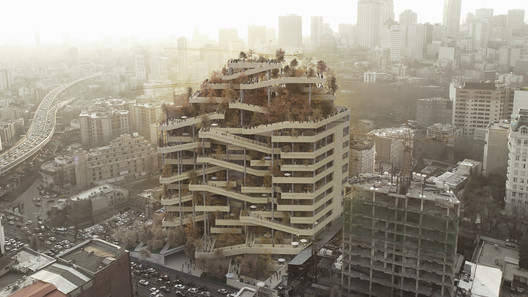