Text description provided by the architects. The building is located on the Majadahonda Campus of the Instituto de Salud Carlos III, primarily dedicated to research. As part of a plan to modernize its facilities, the Institute launched a public competition for the complete renovation and extension of Building 53, the first one built on the Campus in the sixties. The winning design included the complete renovation of the building, its extension with new volumes that connect it to other adjacent buildings, and its conversion to new uses such as administrative, a library and lecture rooms for researchers, including landscaping of about 14,000m2 in its immediate surroundings.

The initial constraints of the old building turned out to be very beneficial for the project despite their apparent inconvenience, in particular the outer appearance of the building and the development of its spatial section. The pre-existing building had major structural weaknesses and consisted of three floors with restricted room height, long corridors and numerous small, heterogeneous and poorly connected spaces, which required complete refurbishment. To this end, all the slabs were demolished and the overall structure reinforced. Several openings were made in the new slabs, forming double and triple height spaces that significantly reduce the length of the corridors. This improves their natural lighting and favours interconnection between levels, providing relaxation areas for researchers to meet informally. The envelope of the renovated building is solved by means of a light, energy-efficient ventilated façade, with different textures and the same material - steel sheet -, which provides coherence to the original heterogeneous building complex and reduces materiality and costs. The strategy of wrapping the existing cantilever that runs round the entire perimeter also serves several purposes: it provides space for both building services and the supporting structure of the wire mesh of the façade, while creating a powerful projection at the upper level that defines the volume of the building. The modulated double skin of the library also adds unity to the whole. Its rhythm disguises the chaotic windows of the original facade and creates a space in between interior and exterior spaces that helps to adjust the light and protects the quiet areas from the outdoor environment.

Two new volumes connect the renovated building to the laboratory buildings of the campus. The first one extends horizontally. Built in white concrete, it hosts the lecture rooms and has a technical floor with building services that also serve the adjacent buildings of the Centro Nacional de Microbiología; the second volume rises in height. It acts as an access, and ramps connect to the different levels between the two buildings. The complex has been landscaped to include new paths and accesses, gardens and outdoor spaces for researchers, with native plants. The topography has been modified to improve the functionality of the campus while integrating the architecture into a defining landscape. 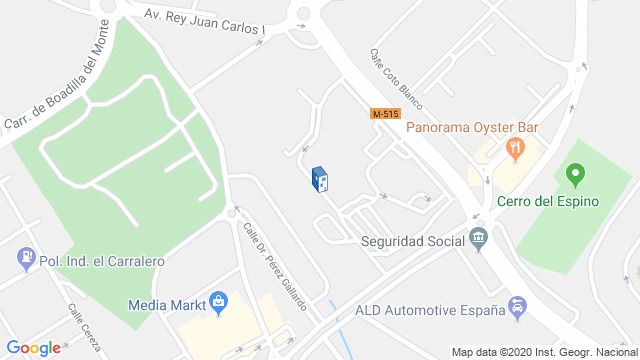 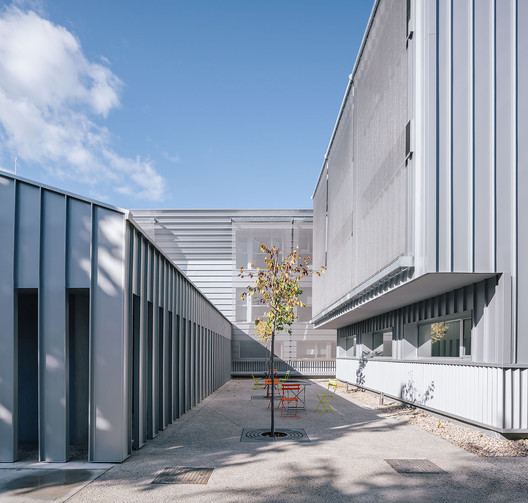 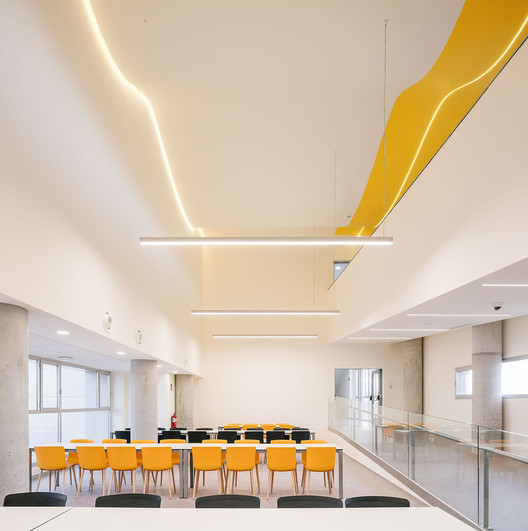