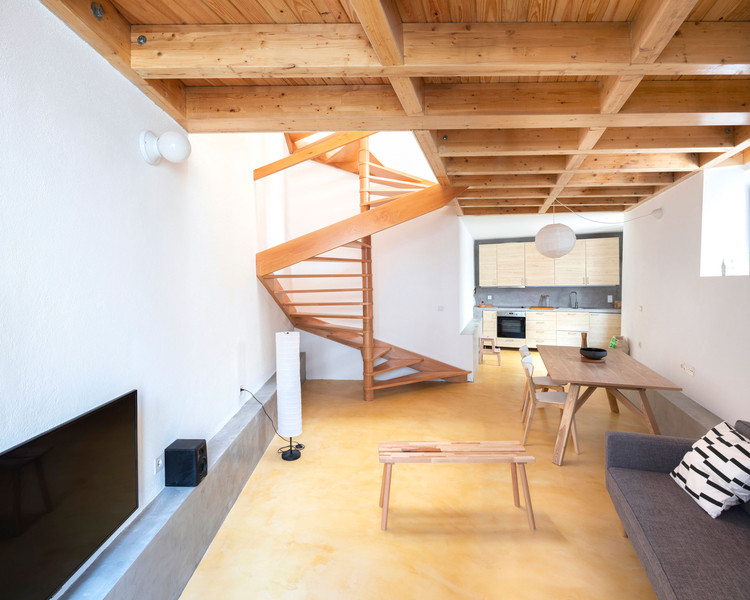 Text description provided by the architects. Located in the old part of Condeixa-a-Nova, a historical town in the Coimbra region, this house belonged to a Portuguese family that immigrated to Brazil in the 1960s. For three decades the house was in ruins until recently a great-grandson got the opportunity of rebuilding it. The owner, an architect graduated in FAU-USP, comments on the experience of the design and building process, which ended up being an exchange of knowledge and experiences with the local architect in charge, Bernardo Amaral from BAAU, an architecture office based in Porto.

“ Rebuilding the house that belonged to my great grandfather was an opportunity to get in touch with the traditional construction techniques in central region of Portugal; through its ruins, by preserving the use of the original materials, replacing with new and more efficient components and by maintaining the main traces of the design of the original house. The transatlantic endeavor was also an opportunity to understand how a building site of a small reconstruction in the historical center of a Portuguese village works, as well as getting to know the national support policies  for building rehabilitation in historical centers.”

The house consisted originally of two independent volumes, summing up 49 m2 of floor area. The main volume consisted of a first floor and an attic marked externally by a vertical wall with ceramic tiles. The smaller volume had two floors. The first floor was connected with the main building, but the ground floor was autonomous, with an entrance from the street. The design strategy was to keep the existing external stone walls as well as its openings, uniting the two volumes on the ground floor and adding a second floor with ceramic tiles on the wall and roof.

On the main volume, we placed the living room and the two bedrooms, while the kitchen, toilet and a roof terrace were located on the smaller building. The light well and the staircase break up the small dimensions of each floor, by uniting physically and visually the three levels of the house. With and helical, irregular shape, this staircase was inspired by the project of Lina Bo Bardi, an Italian architect that lived and worked in Brazil – the transformation of an old manor in Salvador into the Modern Art Museum of Bahia.

Departing from different architectural references and design methodologies, this project reveals traces of the education and experience of both architects, who had not worked together before, but shared references and reflections in the theoretical field, namely from their doctoral research. By integrating Portuguese and Brazilian architectural references, this work reflects the permanent dialogue between Portugal and Brazil with different historical times, different traditional and contemporary building technologies and a direct relationship between building site, memory, and project.