In an effort to avoid disruptions to the coming football season (and by extension, any frustration among the passionate University of Iowa Hawkeyes’ fans), the challenge facing Iowa City architecture firm Neumann Monson was to rapidly deliver and install Kinnick Stadium’s new custom glass facade, all during the team’s off-season. Ranked top among Big 10 stadiums, Kinnick opened the 2019 football season with an expanded North End Zone after careful coordination by the design, manufacturing, and construction teams throughout the project. 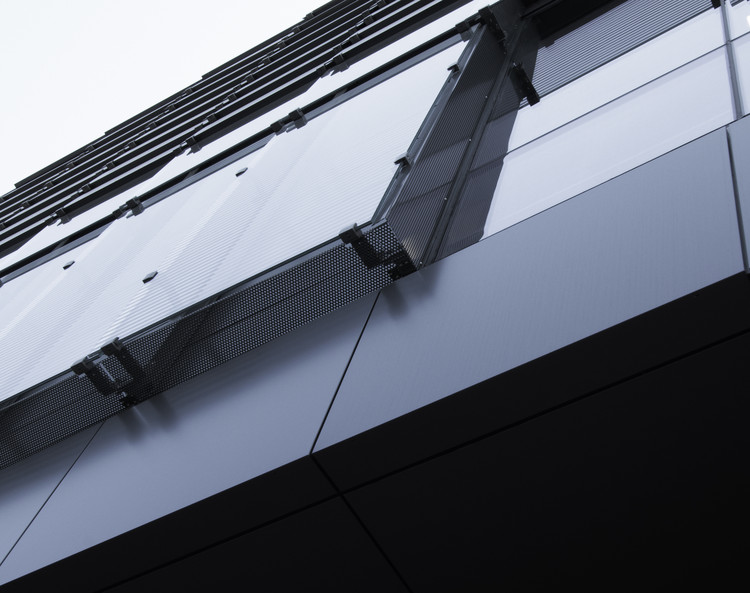 The addition to the historic 1929 building features a customized, ventilated glass facade cantilevered beyond the original structure, while a unique "hawk wing" design on the glass lends iconic Hawkeye symbolism to Kinnick Stadium's exterior. Designed by Neumann Monson Architects and HNTB, the facade was manufactured by Bendheim Wall Systems Inc. (New Jersey) and installed by Architectural Wall Systems (Clive, IA). The main objectives for the glass facade were to clad both conditioned and unconditioned spaces and to combine decorative glass with fiber cement panels all in the same system - and to complete it on the tight schedule provided by football’s off-season.

Initially specifying a traditional point-supported spider cladding system, the architects switched to Bendheim’s non-traditional ventilated facade system after seeing renderings and a full-scale 6’ x 6’ mockup, including the glass and fiber cement panels. According to Kim McDonald, Principal at Neumann Monson, the opportunity to compare facade systems via physical mockups “assisted in reviewing constructability and understanding tolerances. The success of the mockup directly correlated to the smooth and efficient installation of the final product.” The chosen system holds the glass in place via a patented system of compression clips, allowing increased flexibility and durability in the field. For the Kinnick facade in particular, this meant a more efficient fabrication and installation process ideal for the tight timeline. The fully-fabricated glass system arrived on site before construction even began and in just two months, the install was complete for all 20,000 square feet of cladding.

To achieve the desired “hawk-wing” appearance, the architects chose Bendheim’s double-shingled Wall-VH option, which features both horizontal and vertical overlap, from the many customizable panel configurations available. A custom fritted glass pattern enhanced the effect, representing the gradient pattern found naturally in hawk feathers. To maintain alignment of the frit pattern from end to end and top to bottom, Bendheim designed the facade system to have 1.5” tolerances in every direction. Additionally, because the clip system does not require drilling any holes through the cladding material, it allowed for the integration of both the glass and fiber cement panels. The finished 655' span of the facade is comprised of over 14,000 square feet of glass and 6,000 square feet of fiber cement.

Bendheim’s facade design and development began with 3D models and progressed through to painstakingly detailed shop drawings. “We had to meticulously detail the size and location of each hole in the metal, as well as each glass and fiber-cement panel placement,” recalls Said Elieh, Bendheim’s Director of Technical Design. This process was worthwhile, however, as it allowed the installer, Architectural Wall Systems (AWS), to pre-drill and finish the steel supports and pre-assemble the clips, significantly shortening installation time. The flexibility of the system also allowed the glass fabrication to be expedited as it was based on the approved drawings instead of waiting for the precise field measurements typically required.

“The system was designed and installed skillfully within a very tight jobsite, and in coordination with more than 10 trades involved in the project.” - Kim McDonald, Principal at Neumann Monson

Bendheim’s Wall-VH glass facade system was tailored to the project’s parameters, including custom mid-point wind clips to accommodate the large glass panels, some of which were up to 5’ x 13’ in size and weighed as much as 500 pounds each. As an added benefit, the generous ½” panel spacing provided to accept the wind clips also ensured there would be no issues associated with strong vibrations or loud sounds. The new facade at Kinnick Stadium includes roughly 1,100 steel plates and 2,500 custom-colored aluminum fittings.

The premium glass used at Kinnick is custom architectural glass, featuring low iron content, a custom imprint, and safety tempering and lamination with structural interlayers. The low iron content means that the glass is nearly colorless in the day and at night, provides inviting crystal-clear views of the interior spaces.

To avoid a repeating pattern in the custom frit design, the architect provided artwork that was then transferred to three extra-large silk screens. Each glass panel was aligned to one of the screens, producing the mixed imprints detailed in the shop drawings. The decorative glass also solves a pragmatic problem. The denser frit on the upper stories, combined with the opaque fiber cement panels, means that in the off-season, the stadium’s upper stories can be used for temporary storage. Views into the stadium are obscured from the outside, providing a higher level of privacy and presenting a clean, uniform exterior. The frit pattern at Kinnick also makes the glass bird-friendly, the spacing of the lines complying with the 2" x 4” bird-safe principle, which helps prevent birds from accidentally striking windows. The Kinnick pattern’s vertical spacing ranges from 1.5” to 2", which keeps it within a safe range.

The open joints in Bendheim’s glass facade simplify issues like smoke mitigation, while also working to maximize natural ventilation during summer games, yet the system is still able to offer moisture protection and block wind during the colder parts of the football season. The new facade also contributes to the visitor experience at the club level. The winged V-shape of the facade was designed to align with the centerline of the stadium, pointing the way for pedestrian traffic and creating a “subtle culmination to the fan ‘procession’ that promenades through the north skywalk,” McDonald describes.

NewsArticlesUniversity of IowaGlassGlass Facadestadium designBendheim
Cite: "How to Construct a Stadium Facade from Custom Glass While on a Tight Deadline" 09 Mar 2020. ArchDaily. Accessed . <https://www.archdaily.com/931721/how-to-construct-a-stadium-facade-from-custom-glass-while-on-a-tight-deadline> ISSN 0719-8884
Save