Save
What Does It Mean to Build Bauhaus “On Brand”?
Share
Or
Copy

At the moment in Berlin, kapitän Gropius’s keel is shipwrecked in a sea of muddy ditches, its programming relocated to a temporary annex. The building, which broke ground in 1976, the same year the kapitän’s Dessau campus was restored by the German Democratic Republic, opened in 1979 and was never much loved, although footfalls dramatically increased after the Wall came down. It is visibly the result of compromise: Gropius’s original plans, drawn up in 1964 for a sloped site in the small city of Darmstadt near Frankfurt, were waylaid by local politicians; only in the following decade, after Gropius’s death, did the project find a site in then–West Berlin. The dislocation did violence to the original scheme, however, requiring extensive modifications by Gropius’s acolyte Alex Cvijanovic (not least among them translating the building to flatland).

Whatever verve there was in that first project was methodically snuffed out in the pallid final version. It is modular without the conviction for its logic, and subtractive “without a flaming desire for new potentialities,” to borrow a line from the critic Sibyl Moholy-Nagy, who seized every chance to antagonize Gropius in his elder-statesman years. The surfaces—which, contrary to the school’s reputation, were a source of much craftsmanly anxiety for architects at the Bauhaus—are dull. The trademark shed roofs, and the jaunty winding ramp added by Cvijanovic, strive for loftier heights but don’t reach them. It was, and remains, not very Bauhaus.

The case of the Bauhaus-Archiv is instructive because it highlights the problem of building “on brand,” especially a legacy brand like BAUHAUS. The magic simply cannot be recaptured, as surely as tragedy passes into farce, farce into memetic nihilism. While plenty of “modern” buildings are going up in every city in the world, they have more in common with IKEA and the lobotomizing virality of Alucobond than with the 20th century’s most famous design school.

The genius of the Bauhaus, such as it was, lay in the combustible political situation that forced it into being. From the magma of world war emerged a new spirituality, to which Gropius gave voice in his 1919 manifesto while founding the school in Weimar. “Crystallization” is the key term, as in his memorable exhortation: “Art must finally find its crystalline expression in a great total work of art. And this great total work of art, this cathedral of the future, will then shine with its abundance of light into the smallest objects of everyday life.”

It is no coincidence, then, that the most reproduced image of the Bauhaus’s initial Weimar period was Lyonel Feininger’s woodcut depicting a prismatic “cathedral of socialism.” This socialism was of the William Morris sort, earthy and fraternal, bowing to sensuous feeling and species essence before instrumental reason. Art, that is to say crafts, would be a prophylactic against the mechanized terror of war prosecuted by the bourgeoisie at home and abroad.

What was required to face down this opposition was a surplus of feeling and humanity, and what better place to take such a stand than in Weimar, the nerve center of the German Enlightenment, home of Goethe and Schiller? But soon, the expressionist Esperanto that wafted through the Bauhaus workshops morphed into another design theodicy, more angular and staccato, partly based on the work of the De Stijlist Theo van Doesburg.

Neither influence found particular purchase with the architect Heike Hanada, who designed the Bauhaus Museum Weimar. A squat concrete cube, it evinces a little of the angst that was latent in expressionism, but denies its redemptive vector. Appropriate, given the importance of Weimar to the Nazis’ machine-abetted policy of extermination, and the site’s proximity to both the Gauforum (the administrative building where that policy was drawn up) and the Buchenwald camp (where it was implemented). The museum’s massing is leavened by only a few windows, giving off a feeling of intense solidity. The strategy would appear to be one of internalized negative enlightenment, if not for the airy interiors, which nonetheless suffer from an overemphasis of the central, very narrow staircase.

For all this compression and heavy bearing, a “bunker” it is not, as some critics have claimed. Architectural criticism has always had an uneasy pact with simile. In this case, the temptation is understandable—being so close to the Gauforum and its adjoining courtyard, which once bore the honorific “Adolf Hitler-platz”—and, if anything, it points to a version of Godwin’s law: Any discussion of the Bauhaus will lead to Nazism.

The school was first pushed out of Weimar when rankled provincial authorities pulled its funding. It moved to Dessau, where the school had its Golden Years on Gropius’s campus (1926), incubating. Gropius passed the baton to the grinning communist (and architecturally his better) Hannes Meyer. The school turned a profit, while at the same time, students began more fully engaging with the world outside their workshops. This became a problem and Meyer was forced out, with Mies van der Rohe stepping into the breach. He gutted the curriculum and turned the focus away from workers’ housing—and advertising, painting, sculpture, and theater—to plateglass Platonic villas. Student explorations into the riddles of industry and of history were rechanneled into finger-to-lip probing of architectural form. But it didn’t matter, because the brownshirts came, some even infiltrating the Bauhäusler. They called the school the “aquarium” and booted it up to Berlin, where it finally acquiesced to Kulturkampf browbeating.

The Bauhaus was among the first victims of the fascists, prompting the dispersal of its leading lights across borders and hemispheres. (Again, Moholy-Nagy: “In 1933 Hitler shook the tree and America picked up the fruit of German genius.”) By the end of the decade, Gropius, Breuer, and others had been welcomed into the heart of the American intellectual firmament, and “Grope”—the obtuse nickname his new companions gave him—preemptively began expunging the record. The Weimar period was binned in toto, and the school’s socialist undercurrent was retconned. What was left was his Dessau Bauhaus, an institution too modern for the Old Continent.

That Bauhaus was a linchpin in the CIA’s soft-power strategy to chip away at the elevated status afforded to the Soviets after World War II. Dessau, both the campus and the city, fell under Soviet control, but the real Bauhaus, like democracy, lived on in the First World. As scholars such as Kathleen James-Chakraborty have shown, the various modernities that existed up to, alongside, and even after the Bauhaus in Germany—Neues Bauen, expressionism, Weimar Lichtreklame—were formally subsumed into BAUHAUS, a brand to be imported throughout the NATO bloc.

But what counted for echt Bauhaus architecture in its homeland could be counted on two hands. Apart from the school campus, there are textbook buildings, like the totalizing villas Gropius built for Bauhaus masters (variably, Kandinsky, Moholy-Nagy), and non-textbook, stucco-less works—namely, Gropius’s Employment Office (1929) and Hannes Meyer’s deceptively straightforward Houses with Balcony Access (1930). In Weimar, the 1923 Haus am Horn was a first stab at the genre. Farther from the Mitteldeutschland beat is Meyer’s 1930 ADGB Trade Union School in Bernau outside Berlin; like the Dessau campus, it is chock-full of ideas—and eminently usable ones at that—while not giving a fig about Gropius’s Sachlichkeit signaling.

Even a century on, these buildings still crackle through their sheer force of example. Of course, one could do without the Lutheran purity, which was subverted by the Bauhäusler anyway in their everyday social relations. Or the flighty conceptual afflatus (“a new unity”) or technophilic hymning (art-and- technology, technology-and-art, amen).

Thanks be given, then, to addenda architects, the Barcelona, Spain–based studio behind the Bauhaus Museum Dessau. It has done away with the most cloying proclivities of the Dessau gang, while keeping the hard lines and modish typography. Which isn’t to say that the building is a standout. The diagram is exceedingly simple, a classic void-solid relationship: A continuous clear-span exhibition hall is suspended over a continuous clear- span mixed-programming hall. The upper half is tinted black to conceal its contents, while the bottom leaves the translucent envelope untouched.

So far, so self-effacing. But the glazing is not transparent as it should be, given the building’s prominent siting in a large park in the town center. The architects had imagined dematerializing the facade (very Bauhaus) to the extent that inside and outside were blurred, but short of this, the museum’s presence in the otherwise public space feels intrusive.

The museum extension in Berlin, meanwhile, is the most elegant design of the new crop. The majority of the project will be concealed underground, with a five-story towerlet being the only obvious superstructure in the plan. It features gossamer-thin, parametrically ruled columns on the exterior, leaving the interior floors (for a museum café and shop) completely open. Staab Architekten, which was awarded the commission in 2015, was wise to put some distance between the extant building and its own, the better to disavow any outright influence.

It is ironic that the Bauhaus’s claim to history largely hinges on the architectural works imputed to it. Apart from Meyer’s buildings and the Dessau campus, “Bauhaus architecture” is something of a misdirection. It was the school’s other spheres of activity, from weaving to wallpaper design, painting to advertising, that were pioneering, the ones that still manage to capture our imagination. (Indeed, the Bauhaus lacked an architecture program for much of its existence.)

If the Bauhaus were reconstituted in 2019, what would keep its students up at night? Such is the question asked by the new book Bauhaus Futures (MIT Press), and among the many diverse and timely responses, architecture—i.e., buildings—is nowhere to be found. But you can’t mount a massive tourism campaign on living ideas—risky new IP—only on ossified ones.

Nor can you, prospective traveler, walk around inside an Albers tapestry. You can’t inhabit a Klee painting or press up bodily against the contours of a Brandt teakettle. But you can get on a plane, fly to Berlin, jump on a train to Dessau, hail a taxi to 38 Gropiusallee, walk through those (redder-than-) red doors and pose for photos on the staircases, buy picture books in the gift shop, mourn your lost youth in the canteen. You can even spend the night. 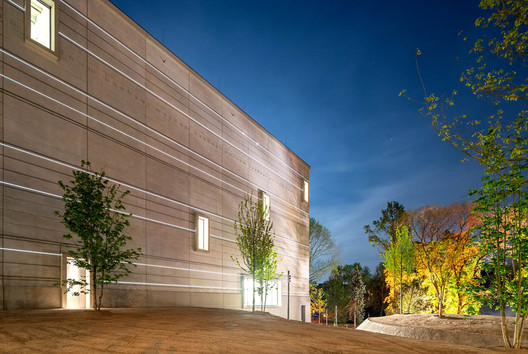