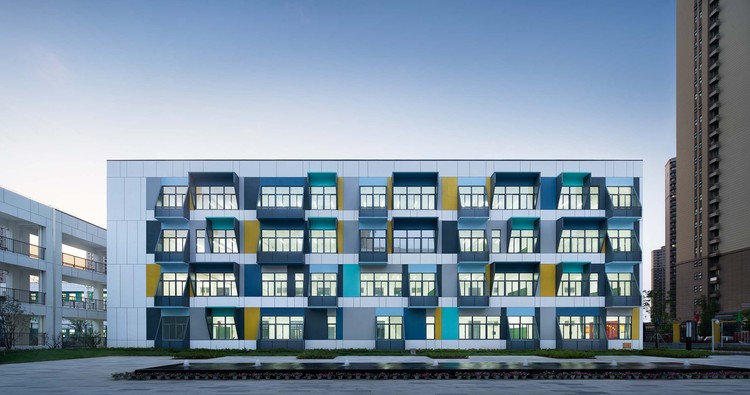 Background of the project
Nanjing Dingjiazhuang No.3 Primary School Project is located in the central community service belt of dingjiazhuang affordable housing area, Nanjing. The scale is a 6-track 36-class primary school with a total site area of 27,500 square meters and a total building area of 26,800 square meters.

Prefabricated industrialization
This project is one of the first batch of pilot projects of industrialized public buildings in Nanjing. Three teaching buildings with high unit repetition rate are selected to test concrete precast construction technology. The primary school adopts the "Scope system" to construct the structural framework, and adopts laminated floors, prefabricated stairs and partition walls to complete the main building; The facade envelope system adopts precast concrete slab; The balconies are made of precast concrete planters and metal railings; Metal assembly is also used for the air conditioning units - the prefabrication rate for the entire industrial-built test section is close to 100%.

Expression in the context of industrialization
In the program design, we not only optimize the teaching building plan as a test section, minimizing the specifications of the prefabricated beams and columns, but also hope to explore the expression of industrialized buildings.

Color and composition as elements of geometric abstraction are applied to the facade design of the building and combined with the context of industrial construction techniques. Among them, the expression of color is combined with the geometric figure, which plays the role of separating prefabricated panels and enriching the overall effect. Moreover, the main colors of blue, green and yellow extracted from the natural landscape create the cheerful and free and artistic atmosphere of the campus. With the triangle and rectangle as the motif, the abstraction created by its simple shape and changeable combination can effectively enhance the sense of space and three-dimensionality, forming a visual impact and creating a possibility of changeability.

On the gable of the teaching building, an abstract painting emphasizing the division of facade prefabricated wall panels was created, appropriately echoing the industrialized construction technology of the project. On the north facade of the teaching building, according to the 9-meter column network, the variation modulus of the 4.5-meter prefabricated exterior wall panel is determined, and the width of the exterior wall panel is 4500mm. And the air conditioning and window cover also change, with the color of paint, forming a rich change. The slanted metal window casings echo the gable's colorful triangular motif, exploring a possibility of building facade language based on modulus control. 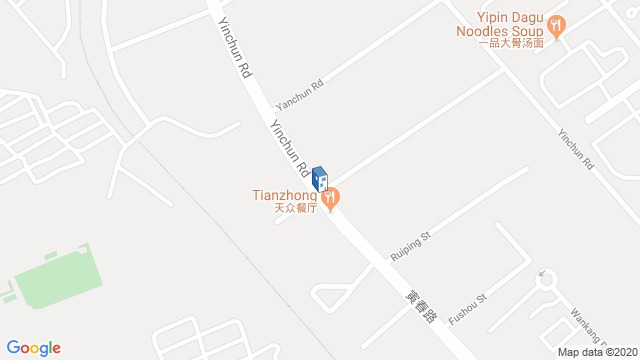 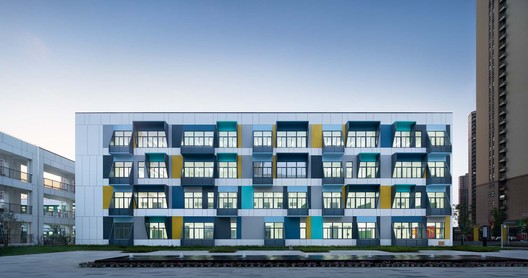