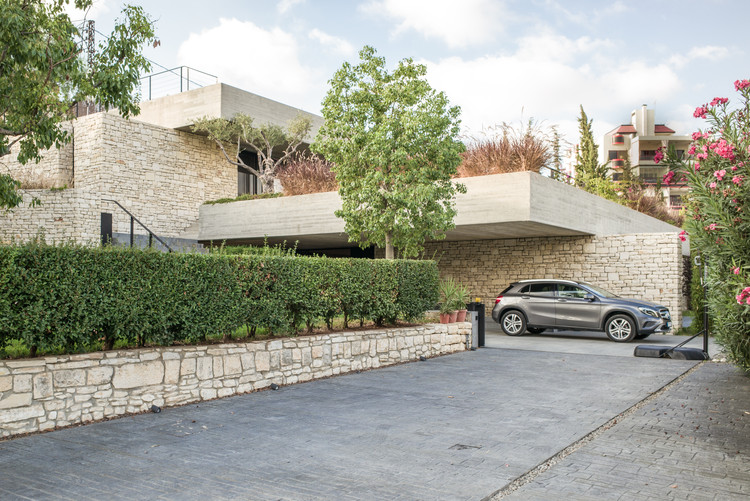 Text description provided by the architects. Rooted in the greenery of the village of Fatqa, 6 Kms away from the Beirut - Tripoli Highway, House K is a private residence built through maximal fusion with its surroundings. The 780sqm plot, is located at an alleyway's dead end and originally made up of six planted terraces of 1meter height each. The place's natural charm highlighted by its authentic local stonewalls, was the main inspiration behind the architectural design. In this iteration, the project is articulated as a landscape extension of the existing topography through the reconstruction of these walls in order to inhabit and cap them; two large concrete slabs were created to do the trick.

Eventually, a strong will of praising the environment and preserving the inherited character urged the architect to reinterpret a vernacular conception of space and material choice, starting by reusing the indigenous stones of the land and following today's technologies through the use of an innovative structural system. With the intention being to fully clear out the architectural impact, HOUSE K 's only marks remain the two slabs with reversed beams in cascade; one serves to be the garden of the main area while the other one nests the pool.

The smooth relation with the parents’ house next-door, along with the practical accessibility which dwells into the ground floor, turning it to the most-frequented part of the residence. Its welcoming flow projects into an open space, in which adjacent bedrooms, study and service areas surround an inner patio. This particularity of the Lebanese traditional central hall house brings us a new twisted version of the classic typology. At the upper level lies a reception area and the main kitchen connected to a backyard from one side and the main garden on the other. This specificity and exposure ensure cross ventilation all year round.

Two cantilever roofs, which are the project’s signature, contour the two floors, separating the public area from the private one. Calculated thoroughly, they insure great natural light in the sleeping area and control it on the upper floor. Oriented South East, the main facade emphasizes the perfect implementation of a solar home. Thus, House K represents the prototype of an updated shelter where sustainability, fluidity, and integration translate the renowned philosophy: "Simplicity is the ultimate sophistication " Leonardo Da Vinci 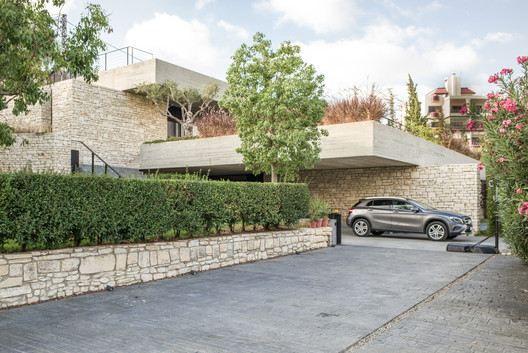