Paraguay’s architecture radically transformed in the last century. For much of the country’s history, indigenous Guarani culture was the primary influence on the built environment. Later, colonialism would shape its cities and settlements. Today, the landlocked country has begun finding new ways to build upon its past, showcasing how residential design can break from tradition. 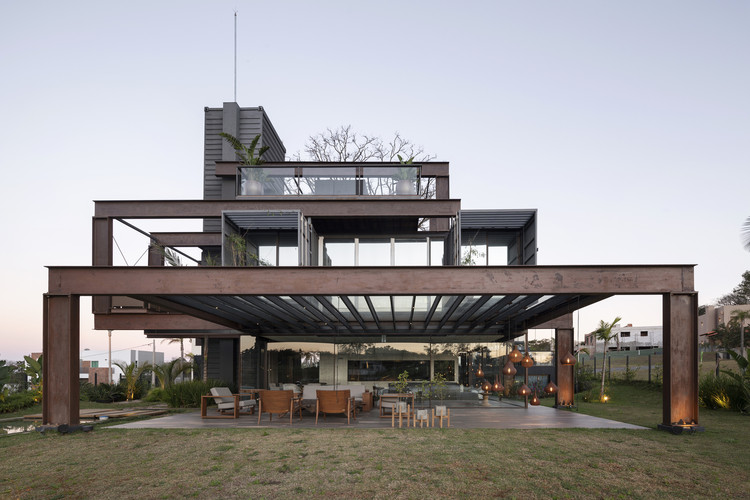 Bordered by Argentina, Bolivia and Brazil, Paraguay remained relatively underdeveloped without extensive mineral resources before the eighteenth century. When the first professional Paraguayan architects began to create new designs in the early twentieth century, they built with a respect for nature while bringing in Art Deco and modern styles. Eventually, Brazilian architectural buildings began to be built in Paraguay, and new urban residential neighborhoods emerged.

Now, deeper modernist roots have extended to rethinking residential design in rural settings. Moving beyond the brick built cathedrals and earlier European-style monuments, these contemporary homes feature revolutionary ideas that look to the future. In doing so, they set a new tone for what can be built in Paraguay and how it can shape its own distinct style with nature.

The project for Las Mercedes House was to intervene in a "sausage" house (Paraguayan housing typology where all the spaces are interconnected and also linked to a common intermediate space which is the gallery). This typology allows for multipurpose spaces, expanding the diversity of uses that can be given to the construction. The proposal adopts this spatial interconnectivity and enhances it extending openings between spaces and heights, creating a single space virtually separated from the pre-existence.

A construction made mostly with local resources in a reforestation land, a corner at the suburban area in Obligado city, with one of its sides on a vehicular street and another one on a projected street that works as a pedestrian cross zone next to a lagoon that reflects the landscape, where the house is located as a horizontal contrast to the vertical trees that fade the sunlight, and reveal the coming wind. A wall made of basaltic stone, organizes 3 principal volumes, it also holds the slab and divides the main spaces and the serving ones, it organizes and hosts the functions.

The Hillside House is located in San Bernardino, 45 minutes from the city of Asuncion, and close enough to enjoy its nature. Therefore, the approach of the house on the hillside is implanted in an inclined base plane with more than 30% of an unparalleled view with a lake. The hillside is strengthened with the construction of the house as a negative of the topography, modifying the ground as little as possible, positive soil – negative house, allowing the making of a house in 3 levels, upper and lower levels as intimate of bedrooms; and the intermediate level contains the social area, the water mirror as a reflection of the landscape.

House in the Air by TDA

A young couple and the birth of their first born child trusted the team to design their home. Economy and practicality are the basic concepts. Here the architecture is subjected to the shade conditions ( 35 degrees celsius in the summer), to the use of the prevailing wind (north-east), and the protection of the raw winters with nearly polar winds (south). These elements gives the team the keys to rethink a better space for the integral development of the clients.

Mariano Roque Alonso city, located next to Asuncion, is part of “Gran Asuncion”, an urban continuity formed by several low-density cities. These cities have been growing along important highways resulting in blocks following their geometry. The “Vivienda Entre Árboles” is built on a one-hectare terrain with rich vegetation, where an old ranch was located. The project is implanted within an area of dense vegetation, with trees that have developed long trunks in search of light. The aim is that the existing trees be part of the house´s integral spaces, utilizing a concrete structure that allows full and empty, generated in interior and exterior spaces.

The exercise starts with the experimental process of use and transformation of available and recovered materials, such as land, recycled glass and formwork wood, configuring them between two existing trees: the sneak, which is outside but framed, and the guavirá that is located in the middle of space to keep us company. The rammed earth walls support the weight of the slab, which rests on 20 cm of the wall, without any anchoring or mooring, taking advantage of the structural qualities of the material. The remaining 10 cm remain outside, to hide the slab, delimiting the exterior only with the walls. All the furniture and doors are from the phenolic plates that were used in the formwork of the slab.

The project is set in a semi-rural area, in the limit of Luque and Asuncion, which are part of a cluster of cities called Gran Asuncion. It is near Ñu Guazú park (a green area of 25 ha.) and the airport. It is situated on high territories which allows cool temperatures and more wind breeze than in urban areas. Both paired houses lie on a 12m x 36m ground, opening all spaces to the east and west orientation.

The main structure is a curved roof without intermediate structures, where the internal pillars are substituted by underground cables. The roof is supported by three concrete pillars that extend the curve, transmitting its weight to the ground. In addition, they work as gutter drops on each side, carrying the water to a cistern, where it is reused for irrigation of the land. Colonial bricks were used for the formwork, as they provide texture, improve acoustics and contribute to the thermal insulation of the volume.

A low cost recycled metal was the solution to building a house that can be moved from one place to another. The oxide defines the materiality and texture which at the same time seeks to contrast its hardness to make it warmer, more livable and appropriate. Three parallelepipeds, two horizontal and a vertical one on a tape of metal profiles release the base plane. We added sliding enclosures that either integrate or separate the interior and exterior areas.