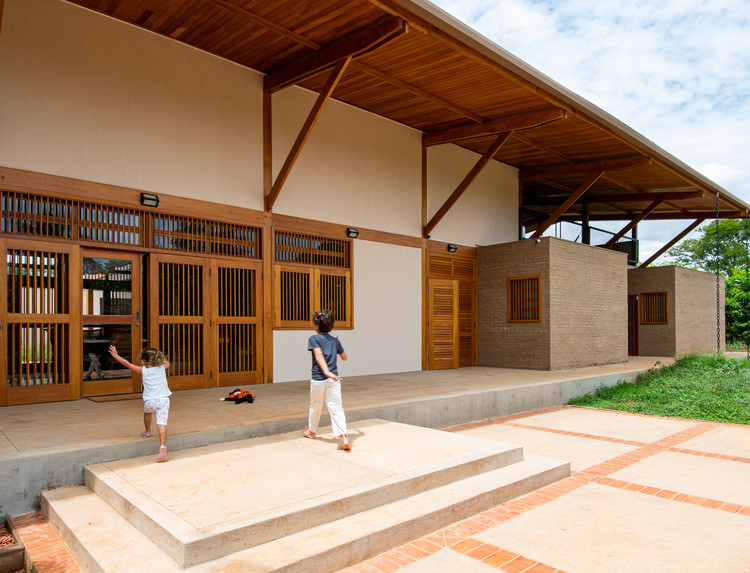 Text description provided by the architects. This house was imagined as a sturdy shelter, a haven for the family’s children to grow up in. It was designed with rich areas of shade against the region’s harsh sun and, at the same time, with generous openings to facilitate a close relationship with the landscape, making the home “visual device” that can take the city’s profile and the forms of nature in the surroundings and frame them, making them a part of itself, evidencing the singular natural light that bathes everything in the region in gold.

The project was carried out from 2012 to 2013, but the house could only be built in 2018 and 2019. It is located on one of the farms in the southern region of Barretos – an inland city in the state of São Paulo – on the edge of the town and countryside. In the years between the project and construction, the neighborhood underwent a major transformation, with part of the land being appropriated for the construction of an access road to a plot of new houses. It was possible, however, to keep the original project, which responded to the new situation imposed on the site.

The starting point was the design of a square – a place for parties and play, an urban artifice built into the rural landscape, chosen to order the space and serve as link between the new home and the pre-existing buildings and pool on the lot. The new house’s spaces were organized linearly, facing this square : four bedrooms on one side, utility areas on the other; in the center, the living room, dining room and kitchen, an important place for the family, hierarchically highlighted by the tall ceiling and the visual link with the exterior, open to the whole dimension of the land, uniting the square and neighboring roads.

To control the temperature inside the house, an elevated and permanently ventilated cover was provided, configuring a double ceiling to reduce thermal transfer from the tiles to the rooms. It was, therefore, possible to build terraces to watch the sun set, see the tree canopy and the city skyline, mediated by roof gardens on hydraulic blocks made of exposed brick advancing toward the front of the plane to catch more light.

The structure in pillars and massive treated Garapa wood beams, from an identified and controlled source, rationalize the construction and benefit from the protection of large, supported eaves. Put up quickly, it allowed the immediate mounting of the cover that protected the workers during building work. The structural choice was not alien to the building tradition in the State of São Paulo for rural houses with wooden supports, influenced by the arrival of people from Minas Gerais State after the gold cycle ended.

The patterning on the brickwork, a visual filter for inner patios, made use of the workers’ skills and the possibilities of the material.

Finally, a panel of ceramic pieces was designed by the architects and positioned in a key point of the living room. It illustrates Brazilian heritage in relationships between artistic disciplines and honors the Itamaraty Palace, designed by Oscar Niemeyer. 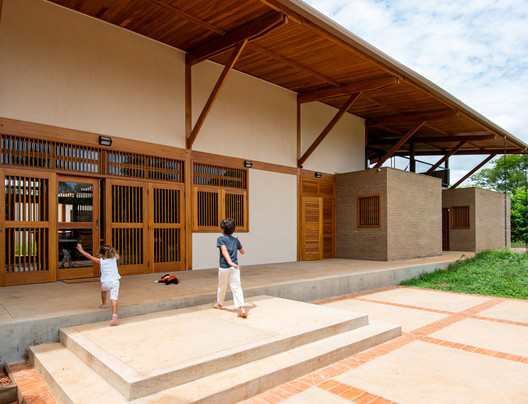