Save
Building Up: Modern Architecture in Pakistan
Share
Or
Copy

Pakistani architecture is defined by multiplicity. Both following tradition and breaking from it, contemporary projects contend with multiple histories. Informed by the coexistence and juxtaposition of conditions like regulated development and informal settlements in Karachi and Islamabad, modern designs are being shaped by broader contexts. In turn, these public and private projects are exploring new spaces and forms. 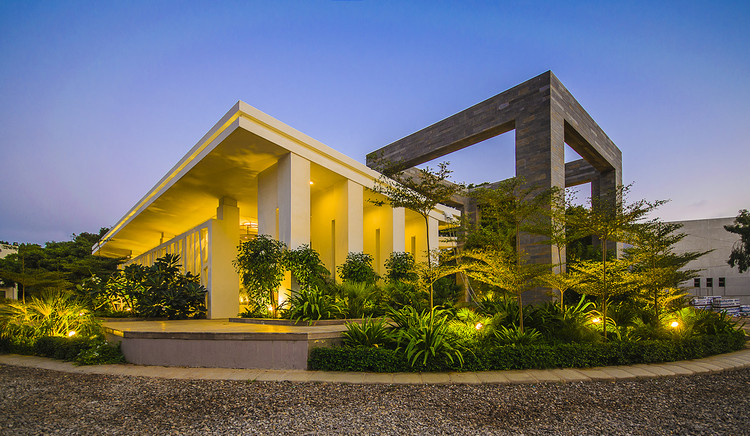 Located along the Arabian Sea in South Asia’s Indian subcontinent, Pakistan shares many borders: Afghanistan and Iran to the west, India to the east, and both China and the Wakhan Corridor to the north. It is the world’s sixth-most populous country, and its recent urban development is informed by a property boom tied to overpopulation and past political interventions. It's also seen in army projects, including expansive housing estates across all major cities. Today, the new architecture of Pakistan tiptoes between physical and social dimensions as it reflects the ethnically and linguistically diverse Islamic republic.

While Pakistan has a long history of Indo-Saracenic and Mughal buildings, there are many examples of Islamic architecture and modern projects. More contemporary work is readily seen after the country moved the capital city to Islamabad in 1958. Architects and designers were influenced by international trends, building both skyscrapers and new low-rise developments alike. The following projects showcase a few of the country’s more recent buildings and structures that were designed and built over the last decade.

Kapadia residence is situated in the KDA Officer’s society. The residence was made as a beach house (per the clients request) around natural light and wind, with an external terrace and white exterior within a private neighborhood. The designed aimed to embody the perception of what architecture of the moment is through built form, open spaces, planning, and visual experience, all the way down to the finer details. As a two family house, the plan was organized to stack one residence on top of the other and create two apartments. One is approached directly from the street front, and the other from an axial staircase that is placed against the main façade.

Designed as contribution to IBA’s campus by NBCL, the prayer hall is a completely naturally ventilated prayer space. It was made with a sculptural screen, which creates a different shadow on the floor at the different times of prayer. Surrounded by foliage, the Prayer Hall creates a sense of calm, contemplation and spirituality for students and faculty amidst the Campus. Built to replace an existing mosque on campus that was demolished with the implementation of the new campus master plan, the prayer hall is primarily used by Muslims for prayer but also opens its doors to people of other faiths to promote interfaith harmony. Placed at the heart of the campus, the prayer hall accommodates 175 worshippers and has a separate enclosure for women with a segregated entrance and ablution area.

Located in Islamabad, Pakistan, the site for the Telenor office campus is made up of 15 acres of an undulating landscape which exemplifies the Potohar plateau. The design ensures that the site’s existing topography and natural water courses remain intact. For this, inspiration was sought from the historic stepwells of Pakistan’s Punjab province and western India, used as an architectural device for storing rainwater (Baolis). A key aspect of the conceptual planning was the Telenor work place model, where social, physical and technological interaction is encouraged in a variety of ways.

Metropolitan studio of Architecture (MSA) collaborated with WARDA, a clothing brand, on designing their new stores, which are planned in various cities of Pakistan. 'Re-tale' is the second flagship store in this series. The first store was designed in Peshawar, Pakistan named ‘Crafting a Retail’. Each flagship store is designed keeping in mind the idea that it will serve as a rejuvenating device for the brand. MSA has taken this collaboration as an opportunity to look closely at the retail culture of Pakistan in general and WARDA retail strategies in specific. These explorations helped in developing an overall thematic of the brand, where context becomes the central focus of the aesthetics of the flagships.

E7-2 in Islamabad was made to embody the traditional values of a typical Pakistani family in a new way, resulting in a modern arrangement of spaces and forms. It is located in an area adjacent to the Margalla hills with views looking out from the upper terraces. The house was made as one solid shell where boundaries are minimal and where spaces flows into each other. By creating a fourteen feet high ceiling for the living room, different levels connect to one another, creating a link between the living spaces and the bedrooms on the upper floors. The link of this shell to the outside world is through a bridge that passes over a pool of water, which acts like a reflection pool at night.

The Student Center was conceived as complete facility for recreation and to create a space which encourages social interaction. In addition to the student lounges, computer lab, offices, indoor play areas, gym, badminton courts, a dining hall and coffee shop and various open spaces for students to gather, the most notable feature that determined the form of the structure is the amphitheater. The challenge of locating an amphitheater within the limited available area of the campus was resolved by placing it on the roof of the Student Center. Two tapered triangular masses intersect at a point that accommodates the geometry of the amphitheater section.

Editor's Note: This article was originally published on December 5th, 2019 and updated on September 20, 2021.