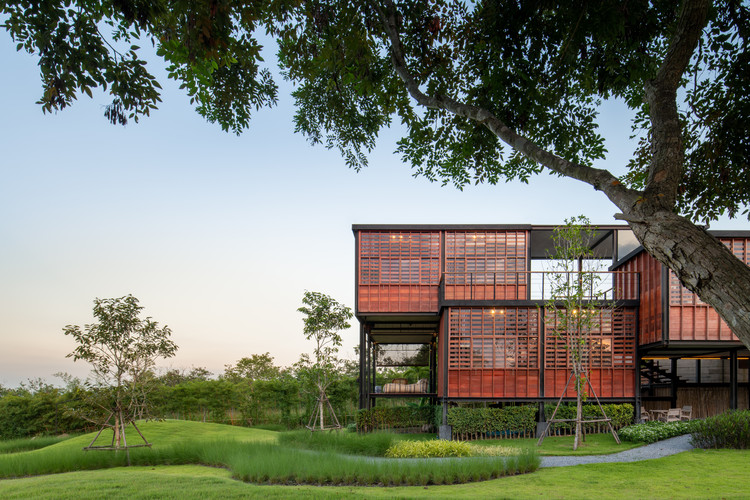 Text description provided by the architects. Developed from the initial plan to construct an Airbnb/ private resort, Binary Wood House was finally built to become a second home for a Bangkokian family of five, and hopefully the last home for the soon-retiree parents. Throughout the entire design project of the house, there has been one and only core value on which the owner and the designers agree — to always hold the predecessors in high regard. In other words, the house exists to respect those who came before, whether they be neighbours, local people, local animals, and local trees.

The wood paneling is also one of the project’s green approaches. Trees are regrown and wood is produced to least disturb the environment. 80% of wood used to construct Binary Wood House comprises different types of reused wood which were repolished, categorised, and assigned to suit different functions in the house. Inspired by the traditional and unique “Korat House”, originating in Nakorn Ratchasima province, the woodwork was carried out by the local craftsmen, whose expertise was utilised and adapted to meet the demands of the modern construction and design. The local employment also means a reduced cost of transportation.

The house location induces harmony with nature. The property is situated on a hill stretching from north to south, with the south area being the highest part of the land which would have made it the vantage point and therefore the most suitable location of the house. However, as a significant number of Phayung trees (Siamese Rosewood) thrive in that area, we had to choose another less occupied patch of land nearby. Binary Wood House was finally built next to Phayung’s peaceful existence, whose silhouettes shield the home from the afternoon sun glare. It is mutualism: the interdependence between humans and nature, a conversation between the house and the trees, like the sound of a wooden flute that returns to its bamboo origin.

The elevated floor is a mindful approach to reduce human disturbance in nature. It allows local animals to feed on their grounds without human interference, as well as prevent an encounter with poisonous creatures. To minimise the construction impact on the soil and plants, the elevated floor also helps regulate moisture balance in the soil, increases the surface of water absorption, and makes the outline of the house blend well with the hillside geography.

The binary system is an analogy we use to answer another design dilemma: the owner’s request for optimum space and a higher level of the house would result in the massive presence which would have produced an eyesore and made its existence far from being respectful to the surroundings. To reduce the sheer presence of the house, we employ a modular design and assign binary functions of either 0 (unoccupied/open space) or 1 (occupied/close space) for every module, each of which equally spans 3.40 metres in width, length, and height to simplify the construction  plan. Some also have interchangeable functions regarding users’ preferences at different times of the day. 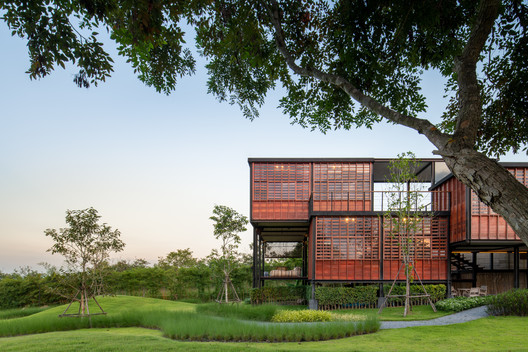