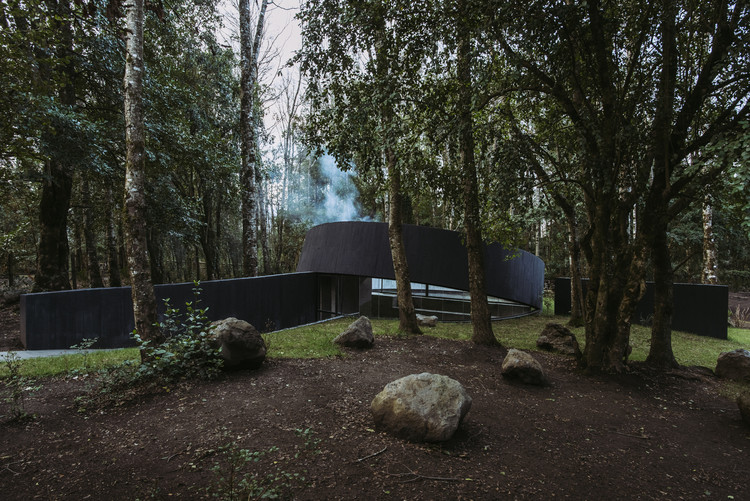 Text description provided by the architects. The project is located in the foothill of the Villarica Volcano, close to Pucón, in the Araucanía Region of Chile. The site has half a hectare and it is almost entirely covered with young oaks and some volcanic rocks that emerge due to volcanic activity. Besides the existing house, there is an empty space: a forest glade in which the project -a new barbecue area for the owners- was chosen to be placed.

The client's requirement was to develop a nature-connected simple-lines reflection space for meditation. In the search of these sensations, a suprematist-art language was reached, inspired by the artist Moholy Nagy. Through these connections and exploración of proportions exploration, we created our own painting that highlight different spatial intentions, in which the shapes don't deny the fullness that surround them, but are part of them, with only a couple of subtle lines that grant the function of inhabiting.

The gestures are divided in five parts. First, looking upwards reveals the forest glade. Second, trace a wall that limits the view to the vehicular road also dividing the interior space in two: the pool area and the barbecue area. Third, a wall is placed blocking the view to the adjoining terrain and divides the public and private areas: the barbecue with kitchen and bathroom. Fourth, the cylinder is then tilted, creating the main access and making the rain water pour into the warm-water pool. Fifth, the terrains existing rocks are placed surrounding the project, in an area that yuxtaposes with the cylinder in a modulated order. This space with rocks grants an extension in case of hosting events with a large number of guests.

The structure is an element that starts as a wall that elevates to work as a 1.6-meters- high beam, supported only in it's keystone, and when it reaches the floor, it's resistant foundation transforms into the pool's base. The walls provide support and at the same time mutate into interior-use furniture.

The result is a project that, when entering, the exterior road and adjoining site lines disappear, highlighting its semi-circular pool, where the nearby trees are reflected in its interior, thus generating a real continuity that does not turn its surroundings, but makes them part of itself, and in consequence it immerse into nature. 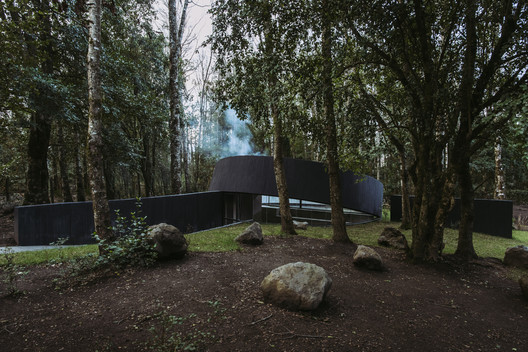