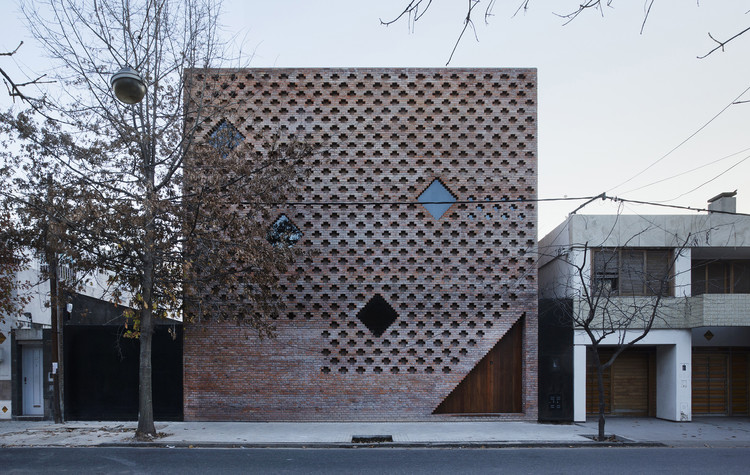 Text description provided by the architects. A regulatory requirement of the city of Rosario that requires the use of bearing brick walls up to the height of twelve meters is the starting point of this research work on bearing masonry and common brick as a basic building unit. Additionally, the decision to work with exposed masonry responds to a contextual continuity with the city's buildings, the use of the expertise achieved by the local workforce and the low maintenance of its surfaces.

The project of this urban three-floor-house priorities a compact footprint that leaves as much free land on the lot as possible, while adapting to an urban sector with increasing building heights. Three walls that run vertically to the street are the structural elements that define two voids of different widths. This is where the living spaces are housed. A staircase parallel to the facade connects the three levels. Perforated masonry walls enclose the front and back facades of the house. All the walls are monolithic and 30 or 45 cm thick, without external or internal thermal or waterproof insulation, achieving the necessary comfort conditions due to the mass of the wall and the waterproof cement joints.

The wet areas are made with the same bricks and the ceilings are left with the bare concrete slab. There is no finished or painted surfaces in the house. A series of studies of the different types of brick rigs and their drilling possibilities in relation to their structural logic determine the adoption of the English cross lock for all the division walls and the facade walls. The north facade is constructed with the minimum amount of material possible with which the wall still continues to maintain its bearing stability. This allows a stronger relationship between the interior and the exterior. With this rig, the loads are transmitted in a diagonal of approximately 45 degrees and its maximum drilling possibility has the highest proportion (35% transparent, 65% opaque).

The rig - understood as a logical system - is translated into a digitally modelled algorithm that recreates the laws of the system and allows modifying the external variables to perform the final fit between the abstract diagram and its specific site (such as the actual dimensions of the site, as well as the bricks and the joints between them). There are no walls and windows but a minimum construction unit that is repeated in different configurations and is regulated according to its need for structural stability on one hand and passage of light on the other. The material is both structure, enclosure, openings, finishing and inherent decoration. 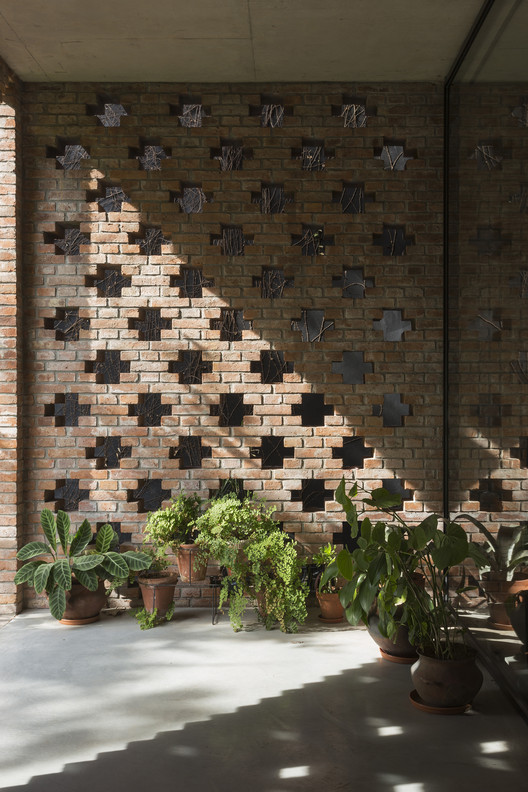