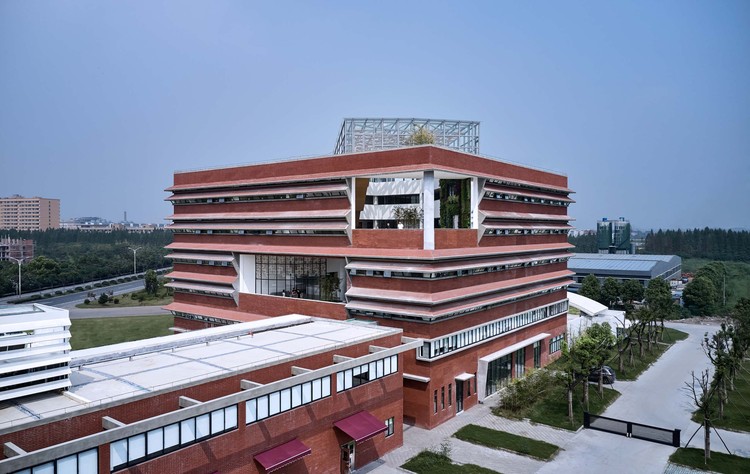 Text description provided by the architects. Located in Zhouquan Town, Tongxiang City, Zhejiang Province, Huateng Headquarters is adjacent to Chongxin Highway where there are many factories in the surrounding area and heavy traffic of trucks. Considering this, Leeko Studio hopes to build an office area brimming with natural light and wind that embodies the spirit of the tranquil Chinese landscape garden in noisy environment.

Frontal space
In a traditional office building, the canopy is often directly attached to the main body, while for Huateng Headquarters, a frontal space is well prepared between the canopy and main body. If we compare the main body to a house, the frontal space can be seen as the vestibule. The frontal space serves as vestibule, with two functions: firstly, it enables the visitor to spend longer time strolling into the building; secondly, in traditional Chinese culture, an entrance facing the North is regarded as violating Feng Shui principles. By adding a frontal space, the entrance of the main building does not have to face north and the visitor will take several turns before entering the building. Such layout of space is often found in traditional Chinese gardens.

The frontal space can be divided into two parts: the first part, which seems nothing special at first glance, stands in contrast with the magnificent main building in Chinese garden-style; the second part is a two-storey space that showcases the achievements of Huateng. Such a design makes the space comfortable and allows more natural light to enter on the second floor.

A serene landscape garden
To fully appreciate the beauty of a space, you need a bit of imagination. For example, to appreciate a Japanese kare-sansui garden, you have to imagine the sand as the sea and the rocks as the island. Likewise, strolling in the inner space of Huateng Headquarters, you could envision yourself becoming part of the landscape painting. Instead of layout along the horizontal level often seen in traditional gardens, the pavilions, terraces, pagodas and open halls are located in the public space of Huateng Headquarters at different floors and heights. Thus, the visitors would feel as if they have to “climb up the mountain” or “go down to the plain” to go to a particular scene in the “landscape painting”. With the change of the space, the visitors disappear into and emerges from the painting. They can rest, look up into the sky, appreciate a faraway landscape or have a bird’s eye view of the scenery below, much like the artistic concepts adopted in the scenes of landscape painting, such as near and far views, view with depth and distance and view with height and distance.

Infuse a touch of beauty into an ordinary material
The design of Huateng Headquarters has stayed true to the understated elegant style embodied by a series of buildings that Leeko Studio has designed for Huateng. For this project, we make a risky choice of using red clay tile, which costs merely 35 Yuan per square meters, as the material for facade. Anyone with the slightest knowledge on aesthetics would find it hard to associate such a material with elegance. Nevertheless, we decide to try it. On one hand, we believe that the facade of a building, no matter how luxurious, can but only please the eyes for a brief moment. By contrast, the interior of a building affects the users’ mood on a daily basis. Thus, with a fixed budget, we hope to save the money on facade so as to allocate more energy and resources to satisfy the users of the building. On the other hand, we want to infuse a touch of lasting beauty into a seemingly ordinary material by turning it into part of a building.

Explore the possibility of contrast
A perfectly proportional human body is often seen as the benchmark of beauty. In architecture, we often talk about the interior and external languages used in designing a building, just like we talk about the structure of a human body. The anatomical section of a human body shows that the skin, muscle, bones and internal organs, with different textures and functions, work together to sustain the physical activity and vitality of the human being. The difference in internal and external language of the human body does not cause it to malfunction. Likewise, for a building, its facade and interior play different roles, thus, it is reasonable that they have different languages. The facade protects the building from all kinds of whether, which means that coarse material is acceptable. By contrast, the interior, which serves the purpose of creating an atmosphere of intimacy, must use materials as mild, cozy and agreeable as possible.

Based on the above, we believe that the materials used for the facade and exterior can be different, as long as they work together to maintain the smooth functioning of the building. We can even mix and match contrasting materials, as we did for Huateng Headquarters in which a plain concrete canopy and frontal space are combined with the the main building covered by red clay tile. Where the external and interior designs do not seem to obviously correlate to each other, does it require a strong inner logic? What kind of logic? These questions are still baffling to us. Leeko Studio will find the answers as we dive deeper into the project.

Open a window to the sky, the city and the countryside
Although the facade of Huateng Headquarters is simple and even somewhat closed, we managed to open two big windows at the south and southeast corner. The south window faces Quanzhou Town, which we dubbed an “urban window”. Standing on the third and fourth floor, you will have a bird eye’s view of the town through the window. The big window at the southeast corner is an “ecological window” facing the countryside. On the fifth and sixth floor, you can appreciate the picturesque countryside through the window. We also open a roof window to let natural light come into landscape garden in the office building.

Let there be light
God created light before anything else. Light is the uttermost important for any living creature. Leeko Studio has emphasized the role of light in every building it has designed. Light can even affect the behavior of the user who resides in the building. We give equal importance to light in designing Huawei Headquarters. We hope that natural light can come through to the first floor in Huateng Headquarters, which stands six-storey high. However, for users on the fifth and sixth floor, they feel that the direct light that penetrates the entire building is too strong. To solve this problem, we used a shield to guard against half of the light at the top. With the movement of the sun, the light and shadow in the building change constantly, as if having a conversation with the users.

Let the wind in
Where there is natural light and wind flowing inside, the garden-style building becomes one with nature. Strolling in the space, immersed in the atmosphere of a landscape painting, you would feel the breeze caressing your face from time to time. You don’t know where it comes from or goes to. All you feel is a cool breeze in summer and a touch of fresh air in winter.

An integral part of the building: the pillar
The pillar, standing at the starting point of the big staircase in the hall, was originally not on the sketch. The structure engineer insisted to add it as the eave-rafter, over five meters long, had to support the six floors, with its side rafter having to support the separate staircase. His proposal was reasonable. Leeko Studio believes that a design shall be fit for purpose and based on existing conditions. We normally don’t pursue any unrealistic design plans. For the pillar, we decided to make it a cylinder and maintain the texture of plain concrete. The boundary between the big staircase and the pillar was also handled properly. The pillar became an unmovable, integral part of the building, and a force in the air, that interacted with the floors rising up in an intricate way.

Sketch on the wall – the first artwork
We tried to combine the art space and ecological concept into the design of Huateng Headquarters, reinventing the way a conventional office building is used and the feeling that it gives to its users. Thus, we have crossed the boundaries between the office space, art space and ecological space. Such ecological concepts as the large windows, green wall and sky-rise greenery were soon turned into reality, as Huateng is specialized in developing vertical green walls. However, it takes time to find suitable artists to design artworks for Huateng. The space reserved for artworks has been empty till now. Sensing my disappointment, Mr. Shen proposal of screen-printing my sketch on the blank wall, which is located at a very important place in the hall, is spiritually soothing for me.

Watertight window
We may all have experienced the rainwater leaking into our homes when there is heavy rain and wind. An airtight window can help avoid this issue. But, what shall the architect do if we cannot guarantee the quality of the windows that will be installed onto the building we have designed? There is a physical method as illustrated below. We made a slanting plate and allowed the window and facade to form a certain angle. In this way, no matter how extreme the weather may be, the rainwater would never leak into the building. The ribbon window and protruding plate leave their shadows on the facade, adding a special style to the facade.

The average construction cost per square meters for the external and interior of Huateng Headquarters (not including decoration) is about 2800 Yuan. This is an “ultimate design” conducted by Leeko Studio, as it represents the final work that Leeko Studio has designed for Huateng during the last decade, and marks a new beginning for it to achieve more in the next decade. 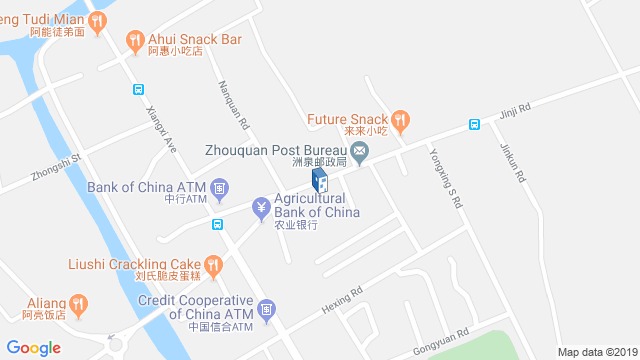 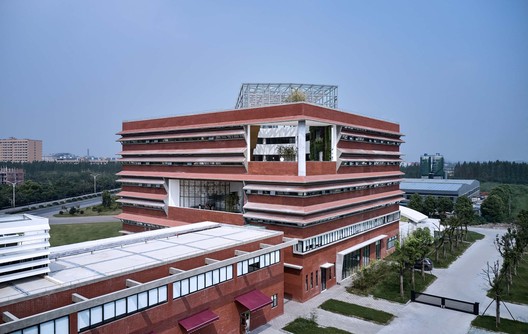