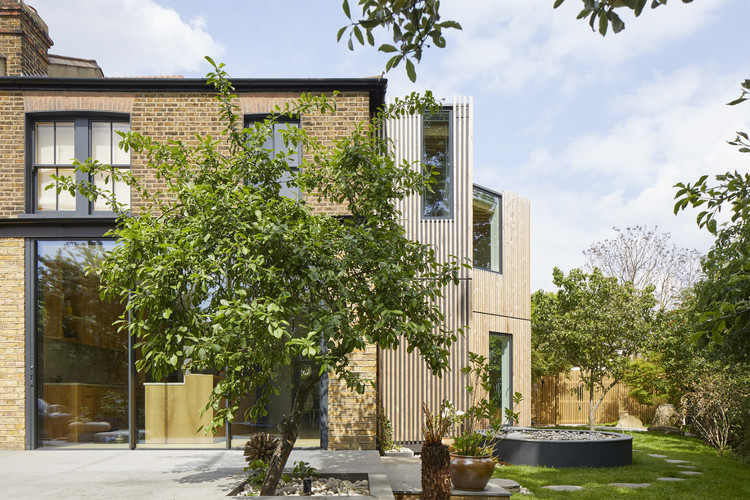 Text description provided by the architects. The existing building is an Edwardian semi-detached house located on a triangular plot along the river Quaggy. This unusual shape allowed space for development on the side while leaving three distinct garden spaces around the house, to the front, side, and rear. The idea was to build a two-story side timber extension which opens up a better connection to these garden spaces while creating an architectural contrast to the existing building. Given the proximity to the riverside, there are large mature trees all along the side and rear boundary, creating a green curtain around the gardens and giving access to longer views in between onto the borrowed landscape beyond.

The interior spaces are interconnected semi open-plan and create distinct areas of a different character. The spaces are directed towards the different garden views, switching direction to create surprising sight-lines. While the dining area acts as a pivot and faces the pond, it connects to the family room which faces the Japanese garden. The lounge is located at the front of the house in the original Victorian space. It is adjacent to the front garden which has a Mediterranean feel. The kitchen addresses the rear garden with its terrace and plays space.

The most relevant interior elements such as floor, kitchen, window seat, and stairs are made of solid ash and ash-veneered plywood. This restrained palette contrasts with white walls and ceilings as well as selected colorful elements. The stairs are treated as a piece of habitable furniture, with partial views in and out. The hole pattern follows the stair profile and includes larger holes along with the eye level of both small children and adults. The floor is laid diagonally to accentuate the dynamic character of the spaces and respond to the triangular shape of the plot.

The direction of the floors leads to the picture window and onwards to the river beyond. The extension is clad in western red cedar batten which is fitted to a dark cement board rain-screen, giving the façade an illusion of depth, similar to the see-through fencing used in the landscaping. Selected functional areas such as the entrance, the kitchen shelf or the tall doors have been painted in strong colors to provide accents throughout the house. This provides moments of surprise akin to walking through a landscape, in contrast to the otherwise restrained materials palette.