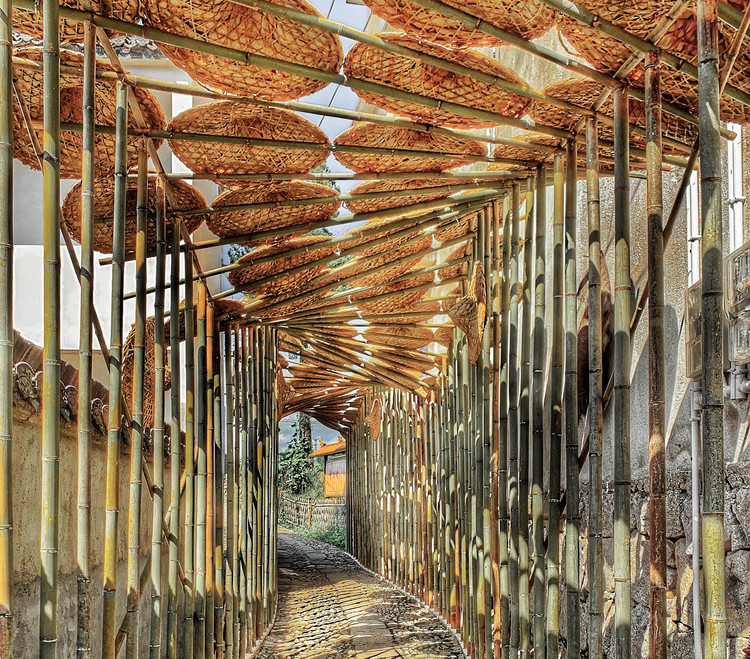 Text description provided by the architects. One hat，just for one people；If there are 10 or 20…even 100…
Could more than 100 people be helped？

The bamboo hat porch is located at the entrance of Shang Village, Jixi Country, Xuan city in Anhui province. Plenty of photographers and tourists are attracted to this small old village. The park nearby the entrance is the only way which must be passed, where is no shed or any cover for people to avoid the strong sunlight or rain. How to afford a place to protect the people from bad weather is what we try to consider, which may be a tiny issue but we can help.

There are a lot of bamboos on the local mountains, which are produced by the nature and can be used as the frame of the porch. Every villager provides one bamboo hat, which can both facilitate communication of villagers and be used as the material of the roof. And the small sky over one person converges to a big sky, under which everybody can be protected, including the visitors from everywhere.

The porch is built between two courtyards, where is the entrance to the village. The walls can protect the structures from wind and rain. The frame is made up of bamboos which are reaped by the bamboo craftsmen. The bottoms of bamboos are fixed in the concrete bases and the tops are conjoined by iron wires. The workers and villagers built the porch according to the sketches of the designer in whole process, which draws the attentions of many villagers. The visitors who wore a bamboo hat finally left the hat on the porch.

The bamboo hat porch is a corporation of the government, the designers and the villagers, which cost no special funds and planned by DHURD, CAUPD and CADG. The whole process shows the conception of low cost, low consumption and community-building, which is a taste of micro intervention to change the village. By building such a small building, the villagers can communicate each other and love their hometown more and more.

After the construction, the road is much cleaner inside the porch, where people can be guarded against the sun and rain. The farmers go through the veranda day by day, while they have to slow down. At every festival and at New Year, there would be many red flags or red characters with good wishes on the structures. The material of the building is not durable. However, it doesn’t matter for the villagers can repair it when they have the time. So long as the happy life is in the village, and the exuberant bamboos are there, the small bamboo hat porch will exist there generation after generation. 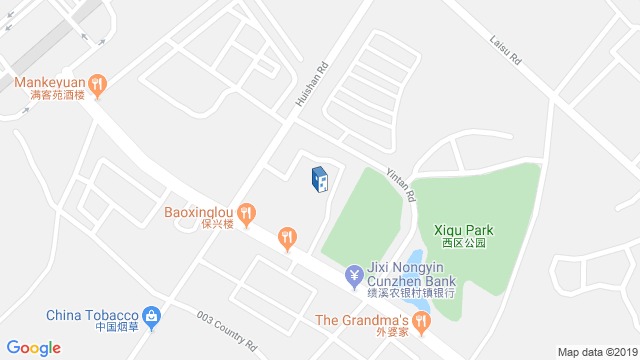 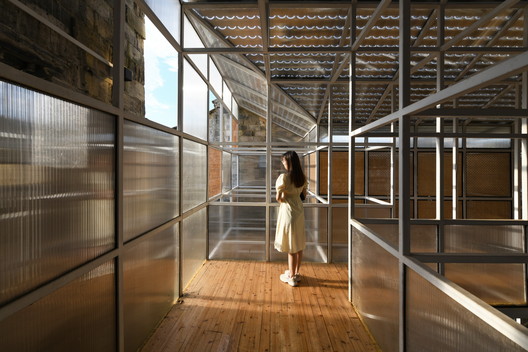 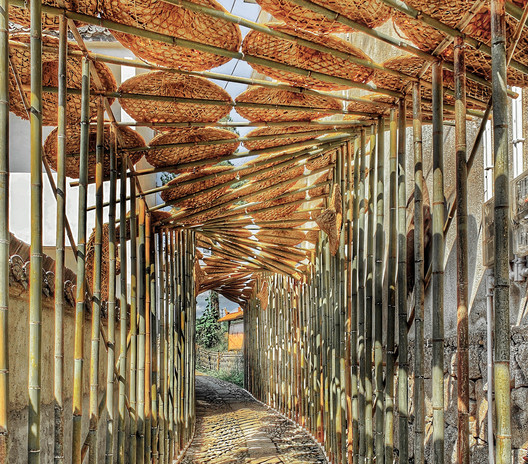