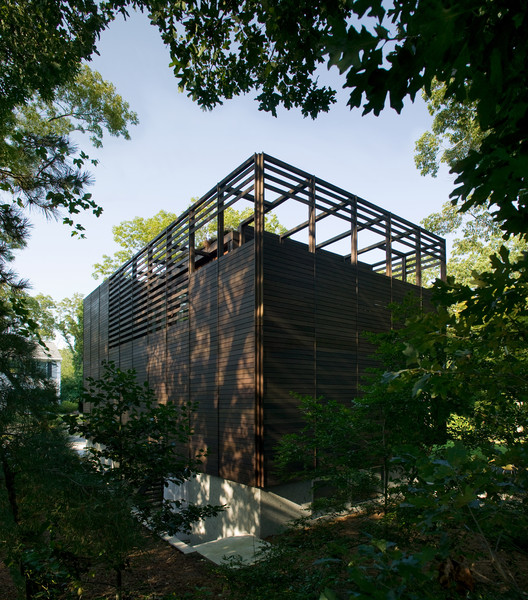 Text description provided by the architects. The VHR-10 gHOUSE is a prototype for a guest house, named for its zoning and location, R-10 zoning in the district of Vineyard Haven. The following guesthouse restrictions apply: Zoning district limits guesthouses to residential lots larger than 12,500sqft. House and guesthouse must be disconnected and at least 10 ft apart. The guesthouse square footage cannot exceed 600sqft. Guesthouse height must be under 24 feet. The first floor of the guesthouse must not exceed 6 feet in height (otherwise it is considered the second floor, and the basement is counted in the livable square feet.) Basement cannot be accessible from the inside living area of house (otherwise considered part of livable square footage).

The initial diagram for the house grew out of the desire to maximize the allowable zoning envelope for the guesthouses in this district. The client built and lives in the guest house as their main house. The desire was to maximize the future value of their lot. Given the height and footprint zoning limitations a W 16’-0” x L 40’-0” x H 24’-0” box was drawn with a 4’-0” construction module. The 600 sqft main living level was established 5’-6” off of the ground – raising the basement a half level, thus allowing walkout and automobile accessibility along a reasonably sloped driveway from the street.

Even though the living area is raised, the 24’-0” height restriction accommodated a double high interior living space. The last restriction, access to basement, was created by dividing the box into three different volumes relating to the cooking, living/dining, and sleeping. The middle volume (living/dining) is shifted 4’-0” out from the other volumes to make room for vertical circulation. The three shifted volumes are wrapped in a wood rain-screen that re-establishes the box as a 20’-0” x 40’-0” volume enveloping the vertical circulation. This condition places the vertical circulation outside the house (living to basement) and inside the building wrapper. This ambiguity creates a layered extension of the inside to the outside while providing a weather protective and privacy screen.

Given the fact that Martha’s Vineyard is an island, labor, materials, and weather greatly impact construction time and budget. The house combines pre-manufactured building techniques with modifications to local modes of production to create a reproducible building system that is unique to the island. The foundation was originally designed to employ a pre-cast concrete foundation system from off island, but given the prevalence of poured-in-placed concrete foundations the costs were less and the house and retaining walls could be the same material.

However, standard pour-in-place forms result in an unrefined finish, so a new water resistant OSB (oriented strand board) was used leaving the random texture of the wood strands concrete surface. The pattern resulted in a very finished texture that hides cracking. The OSB forms were then reused to construct the floor and roof deck of the house. The main structure of the house is built with Structurally Insulated Panels (SIPs) on a 4’-0” module. The panels were assembled in New Hampshire and shipped over via ferry. The entire structure was assembled in 3 days, including two 40 foot engineered beams for the sliding screen cantilevers.

The stress skin nature of the SIP system allowed for a more open interior plan with only one 4’-0” shear wall in the main living / dining volume. The outer rain-screen also on a 4’-0” module is made from pre-assembled panels that were constructed on the ground and lifted into place with a block and tackle. This system accelerated construction time and allows panels to be easily removed for repair or access to the weather envelope.