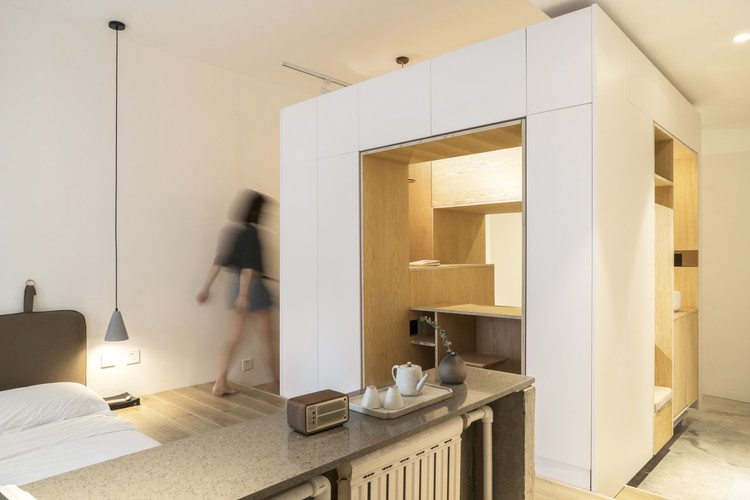 Background
In 2009, Min Le Yuan area inside Xi’an City wall constructed in Ming dynasty was demolished and transformed into a mixed commercial and residential urban block. In recent years, with the relocation of the city's commercial center to the outside of the Ming city wall, the commercial vitality of the region has declined sharply. However, the emergence of the Internet economy has brought new possibilities for the development of the area. A large number of small businesses have settled in and the business model has been spontaneously updated. At the same time, the adjacent railway station and subway station as an important gathering place improve the growth of new business formats. In this context, our client proposec to transform a 40 square meter apartment into a short-term lodging.

Current Situation
The apartment has a conventional design of one bedroom and one living room with an east-west rectangular layout.The living room is connected with the bedroom, and the closed kitchen and bathroom are arranged next to each other on one side. The balcony on the west side allows basic quantity of daylight. The gable of the residential building on the west partially blocks the views from the apartment, and it makes the square and commercial building in the northwest become the main view of the apartment.

Objective
In order to create a unique living experience for travelers,The main problem of design is how to create a changing scale in a single space. We have following focus in future changes:

First, reconstruction of spatial relationship. The change of function brings the change of space demand. The original "living" space is no longer suitable for the higher efficiency of spatial use and more flexible request of the accommodation. The independent state between the rooms needs to be changed under the demand of customers. The space, different from the " Dwelling " in daily life, needs to be reconstructed.

Second, treatment of spatial scale. The transparent space brings new possibilities for the creation of scale. Building a place of " Dwelling " with scale change influences people to consider the “bodily”.

Third, Definition of behaviors in space. Opposite to the routine of daily life,creating dramatic events requires further definition of human behavior in the "dwelling" space, with establishing a space that is both concentrated and separated. It helps new and unexpected behaviors to occur spontaneously.

Second, it is meaningful to remove the non-bearing partition of the kitchen and to lay the bar to define the boundary of the space. On the one hand, it reduces the height of the boundary to enrich functional space, and because of that, the interaction between people sitting in the room and people cooking in the kitchen creates a sense of aesthetic relationship. On the other hand, increasing the thickness of the boundary allow it to become the carrier of behavior interaction between two sides, which connects the two parts of the space.

Finally, we place a complete and “excavated” furniture volume near the entrance in order to achieve “the balance between walking and staying.”

Outside the volume, it is a "walking" space. The living room, corridor and the bedroom create a harmonious state, which meets the basic needs of a short-term lodging and divides the main area further. By rising the ground level and lowing the bed, we create a space with 2.5m in height to correspond with people’s psychological needs.

Inside the volume, it is a "Staying" space, and the excavated furniture volume provides several main openings for staying and visual communications. Interaction with the "Walking" space is archived through the openings. The opening nearby entrance is combined with the living room to form a sofa area. The seats in different heights allow people to sit, lean on or lie in it while watching the video images projected on the wall. We place a desk on the west side combining with the bedroom, and the wrapping space and small-scale bookshelf give the working space certain independence. The opening on the north and south sides is connected with the corridor. The south opening near the washroom is reserved for storage shelf and basin, the north opening is reserved for an one-man bar table. The different opening extend to the outside and create opportunities to peer into each other, resulting in unexpected surprises.

The cabinet door on the surface of the volume can be opened, and the remaining space is usually used as the storage space.

Materials
After solving the spatial relationship, we interpret the space of different scales with materials. In the "Walking" space, white emulsion paint and ceramic tiles are used for the wall and top surface to enhance the continuity of the space. Concrete and wood flooring are used for the ground to distinguish different areas. In the "Staying" space, the outer surface of the furniture volume adopts the white plastic panel to maintain the unity of the color of the external continuous space; the interior of the furniture adopts the solid wood multilayer panel to create a soft and warm space atmosphere, which forms a contrast with the "Walking" space.

Summary
The project is an exploration of the possibility of a single space on the basis of low cost. By changing the spatial scale constantly to create the ambiguous space, we design it to create space corresponding with various behaviors and to evoke people’s perception of space. We redefine the meaning of "dwelling." 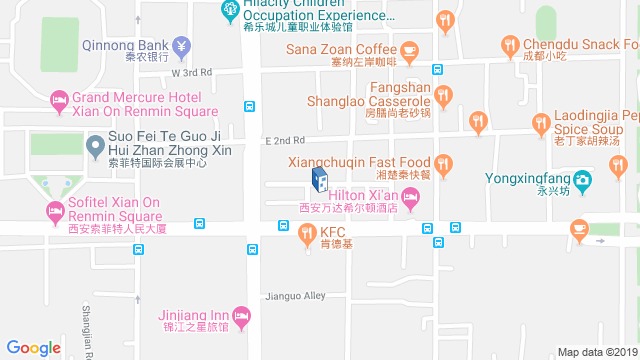 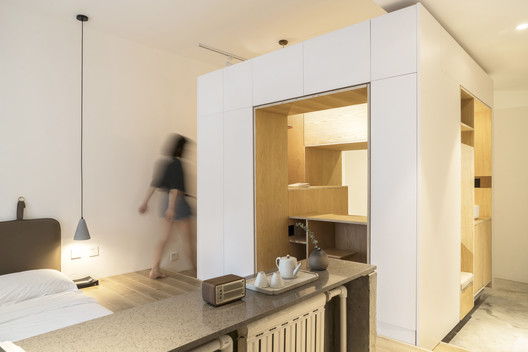