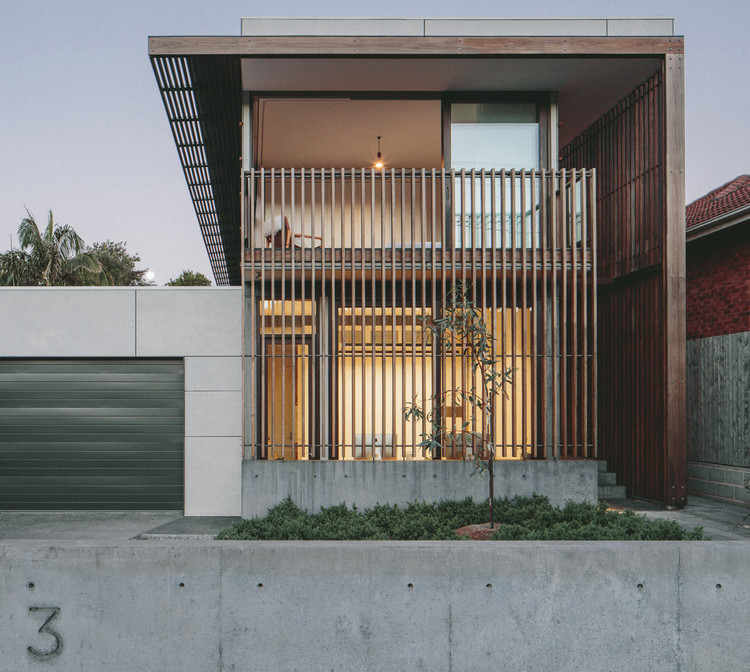 Text description provided by the architects. Set in the coastal suburb of Thirroul, close to the local beach, this residence draws its inspiration not from the waves lapping on its doorstep but from the dominating landscape feature of the area, the Illawarra Escarpment. The edge of the Southern Highlands Plateau is the ever present weather maker of the region, trapping clouds and shading its foothills from the sun in winter while commanding views towards the west with the light playing across its cliff face. These cliffs have been formed through erosion and expose the geological layering within. Claystone, Shale and Sandstone layers are interlaced with a coal seam running through the lower part of the slope. Dubbed the Escarpment House, this residence takes clues from these geological layers surrounding it with its structure layered similarly. A black concrete slab and portal structure forms the lower living areas referencing the coal seam running underneath it, while layers of lighter materials and natural timbers dominate the upper level in reference to the 1800s timber industry in search for the ‘red gold’, the Australian Red Cedar that supported the earliest settlements along its slope.

A timber frame hugs and embraces the spaces to the south. The brief for this project asked for a flexible home that would suit the owner living, working from home, but also accommodate, sustain and delight family life. It includes three bedrooms plus library and an office space, both with a separate entry. Living areas are located downstairs as large, open and airy spaces framed by the concrete portals to relate to the garden, while the bedrooms are tucked away upstairs where the house takes on a more enclosed, homely feel. Intensely customised, it features purpose built timber door furniture, handmade steel lights, steel door jambs against the concrete columns, and a FC clad bathroom as a counterpoint to the recent land release developments of limited variability in the area. As such its creation relied upon the skills of local craftsmen - flaming and quenching the raw steel tube lights in hot oil to protect them from the elements and crafted timber details seen throughout the house such as the light brackets, timber clad bathroom box and custom entry door.

Its construction sequence required each concrete portal to be self-supporting to be formed up first, before any wall and floor framing was erected; an engineering feat creating a most beautiful ruinous appearance whose character has been retained by spacing joinery, wall and ceiling finishes away from the concrete to reveal the shape in its entirety. The highly customised character and experimental material choices deliberately shun product for craftsmanship, and resulted in an excellent cost - value outcome. It relied on a close working relationship with the owner, architect and builder. It drew heavily on skills outside the normal job description of the building team. The home is designed to require minimal heating and cooling with cross and chimney ventilated spaces, north facing glazed areas and various shading devices. Materials were chosen to age gracefully in the coastal environment and for their lower embodied energy and durability. Natural timbers play against the FC cladding reminiscent of the coastal shacks of the area. The concrete slab and portals can provide a building platform many years after the rest of the house may eventually reach the end of its life.