Vietnam has a rich history of traditional architecture. From Rong houses and Trinh Tuong residences to the stilt longhouses of the Ede people, the country has a depth of vernacular construction methods and styles. Today, architects are reinterpreting past building techniques to create neo-traditional homes grounded in contemporary life. 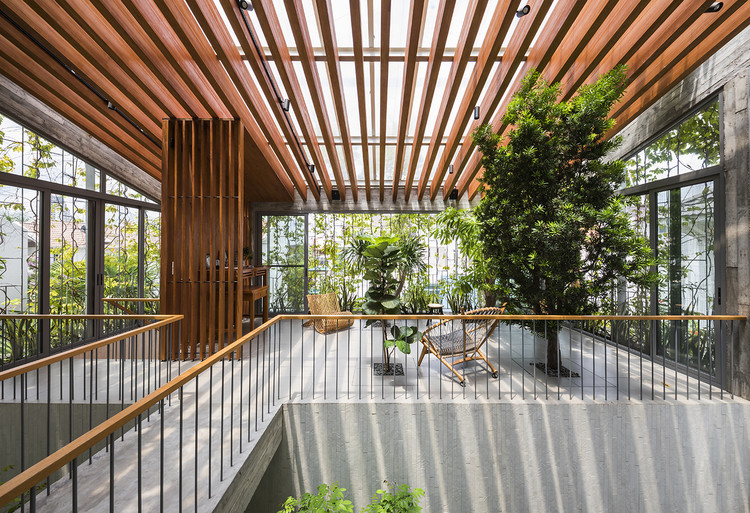 Traditional Vietnamese architecture was often defined by wood-frame structures with steep roofs. These were made with a system of rafters and beams, elements that were part of a larger structure like in the iconic stilt houses. Brick and masonry was also used, often in tandem with a wood frame system. Normally, these structures were elevated, either by stilts or on a foundational base. Large roofs were not uncommon, with formed profiles denoting spaces to be seen from a distance or of cultural importance.

Iconic structures like the stilt houses date back to the Dong Son culture, but are still seen in the country’s highlands and midlands. While single-story architecture is common, there is an incredibly diversity of formal types, like the Hien Lam pavilions in Hue or the bell and drum towers of Thay Pagoda in Ha Tay province. For residences, homes served both practical functions, like storing grain from local farms, and doubled as settings for weddings, funerals and gatherings that were tied to outdoor spaces and the landscape.

Neo-traditional Vietnamese homes take inspiration from the past, and often incorporate open-air designs. These respond to the varied climate and topography between the northern highlands and southern lowlands. Showcasing new housing projects, the following homes rethink building techniques and styles to create an architecture that celebrates nature.

From MIA Design Studio’s perspective, Louvers house is not only a living shelter but also reflects the client’s living style. The client wanted to combine spaces to keep traditional communication between generations of a Vietnamese family. The house was designed with a big void in the middle as a bridge to connect all of the house. This void includes a water feature and skylight to create a natural connection between bedrooms, living room, spa, gym and the parking area. This principle uses natural ventilation to keep the building cool. With local plants and overflow water, the void inside the house becomes the center of family life.

Under the rapid urbanization, cities in Vietnam have diverged far from their origins as low density tropical green space. Newly developed urban areas are losing their connection with nature. Binh house by Vo Trong Nghia Architects (VTN Architects) is one project in the "House for Trees" series, a prototypical housing design, providing green space within high density neighborhood. The Inhabitants is a family of three generations. Therefore, the challenge is to create spaces which allow its residents interact and communicate despite their differences.

The house is located in a suburban commune of Hanoi which has undergone a rapid process of urbanization. It is designed in a philosophy that it will help shape a place similar to the natural environment in an artificial manner. The proposed structure of the house resembles that of a Cave. The overall structure is made up of and enclosed by two layers of brick wall meeting one another at an intersection, with alternate ‘green’ arrangements of plants and vegetables. Bricks have long been a familiar local material and widely used in rural areas of Vietnam with a simple manual construction method.

Located in a suburb of ChauDoc town in AnGiang province, Southern Vietnam, this house is a sharing residence of 3 families. The project budget was small, so the team decided to build the house with thin corrugated metal panels. These were chosen to satisfy not only the regional standards but also the rich lifestyle in which is activated by sunlight, greenery and natural ventilation, similar to living in half-outdoor gardens.

The Cuckoo House is a house for 4 people (parents and 2 kids) combined with a coffee shop located in Da Nang, Vietnam and designed by Tropical Space in 2018. The project is built with a local clay brick which brings a familiar feeling to the user. The Cuckoo house includes three blocks which are connected by buffer layers. These blocks are placed together, and a rectangular block functions as a base. The base block is the coffee shop, and a garden functions connects the outdoor area and the indoor space.

Located in a new residential area of Ho Chi Minh City, this home is bordered by a park on its northern side. The team designed the house to become an extension of its environment by integrating the green of the park into the interior space of the house. A large void was created by cutting the volume through three floors in the diagonal direction of the section. On the ground floor, the void serves as living room, open to the park; on the top floor, it becomes a green-covered family room. The façade surrounding the void is covered with ivy plants, while louvres provide shadow on the top floor. The void incorporates both circulation elements and natural elements like plants and trees, providing the private rooms with additional natural light. It gives a feeling of continuity of the park, to all three floors of the building. 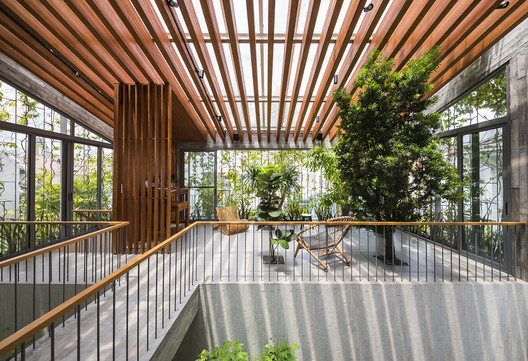