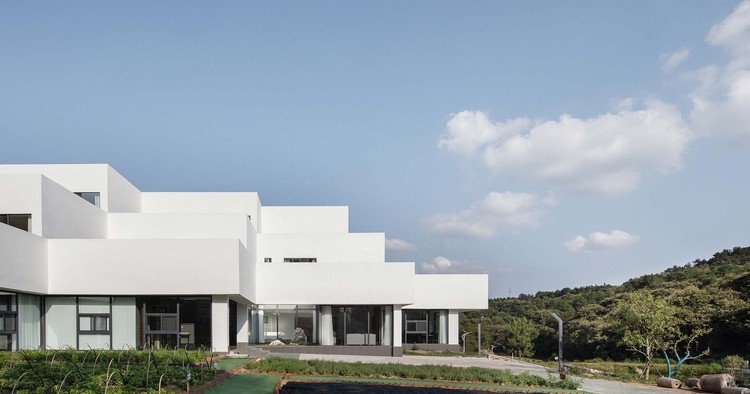 Location and background of Project
The project is located in the Yinpeng Village in Guangshan County, Xinyang, Henan Province, China, which belongs to the Qianshan hilly area of Dabie Moutains. In this area, you will find not only beautiful landscapes with mountains and waters, but also natural resources incl. croplands, reservoirs and forests. Moreover, it also abounds in agricultural resources such as Chinese chestnut, rice, oil-tea camellia, tea, etc. As the integrated service center of the Shenshan Ridge Agro-ecological Park, the main function of this architectural project is to provide the tourists with reception, catering, recreation and accommodation.

Shenshan Ridge, where the project is located, is the hometown of the proprietor, a local property developer, who, after years of business development, hopes to drive the rural economic increase and promote the revitalization of the countryside through his investments in homeland. In addition to the integrated service center, the Shenshan Ridge agro-ecological Park Project also has a comprehensive construction plan of individual buildings incl. distillery, oil expelling workshop and teahouse, as well as functional districts incl. kids' corner, free pick garden and ecological culture park.

Design Concept
The architectural design concept is based on the reading of the project site, which is located at the intersection of the east-west main road and a northward road. It presents the form of an irregular triangle, which is narrower in the north and wider in the south, with hills to the northwest and –east, but relatively flat and open land to the southwest, where a better opposite scenery is to be found. Before the introduction of the architectural design team, the proprietor has had the site formatted and expanded, the hill to the northeast excavated, which has changed the original environment to a certain extent. Faced with the exposed side slope of a 15-meter height, the design team made a proposal to concede the building from the center to the border of the site, connected to the excavated hill, which not only creates outdoor spaces, but also makes the building an extension of the natural massif, constituting a fundamental arrangement that the building backs onto the mountains in the northeast and faces the waters in the southwest, according with the traditional Chinese Feng-Shui principles.

On this basis, the design team made a design concept of “folded horizontal lines”: To employ an architectural organization of set-back mode, which implies the connections of the building as a kind of morphed contour lines to the original massif and an organic extension to the natural environment, yet not simply limited to mechanic imitation and mimesis of the nature.

The design team chooses the “stepped construction in set-back mode” as the basic architectural form: The roof of the lower floor serves as the upper room’s outdoor terrace, so that each guest room is endowed with its independent “hanging garden”, which enriches the accommodation experience. As for the guest rooms, through scattered stacking up of the modularized function units like toy bricks, a rhythmical spatial sequence is takes shape, which, meanwhile, maximizes the viewing sides to the west and the south. At the same time, the traffic organization and the para-position of the pipelines with the structure must be guaranteed, to ensure the realization of the architecture in rural context. As for the outdoor set-back terraces, the design team deliberately stagger them on each floor plan, in order to match the protruding corners of the upper architectural contour with the concave corners of the lower one, in which way a relatively individual outdoor space for activities is formed on the same floor plan and the privacy of the guests is protected.

The outer walls of the building are all white, which is the intention of the design team to weaken the decorative language on the walls regarding both material and color while strengthening the geometric and constructive characteristics of the architecture. In regard to the processing of the building elevation, horizontal lines and solid bodies are emphasized, while successive and concrete white bands take shape through roof parapets and downward cornices. However, the design pays more attention to detailed varieties, as well, in addition to the sense of order. For example, the courtyard to the east side of the entrance forms a small scenery for the interior space, viewed from three perspectives, and the skylight ceiling of the banquet hall provides the inner space with natural lighting while arousing partial variation of the architectural form.

Epilogue and thoughts
In its design practice, the 3andwich Architecture design team has been striving to discuss the balance and choice of these two dualistic expressions, “avant-garde and local”, “concealing and highlighting”, in the rural construction behaviors in China. Seen from certain aspects, this project is “avant-garde”, for its dialoguing with the site with its “hard” architectural form. Yet, the design initiates with an original intention to extend the site, from which aspect the building is also “local” at the same time, merely not a superficial transition of the locality.

Although this project has a rural background, it has been an architectural experiment beyond the regular rural cognition in the meantime. During the period of architectural modernism, Le Corbusier put forward his “Domino” system, which, under the background of industrialized construction, has been promoted rapidly worldwide. In the light of this module, tens of thousands of “match box” buildings have been built in Chinese countryside in the 1980s, which changed the visage of the Chinese countryside. Based on dispassionate thinking after simplified criticism, the modularized constructive technique using reinforced concrete, also deemed as the best form according with the instrumental rationality, is supposed to be the most easily available “architectural approaches” under limited conditions in Chinese countryside. How could “small changes” be applied to simple and boring buildings under limited conditions? And how could the rural needs for achieving greater, faster and more economical results be satisfied, through thinking over the balance of order, module and variation, yet also with breakthroughs on the architectural effects at the same time? These have been the directions of our thinking. Undoubtedly, there have been some pities during the realization of this project, incl. the scenery processing of the “hanging gardens”, the pool on the top roof, and the planned details of the elevations, which were not realized completely according to the original design. But, these are exactly the true and realistic constituent parts of rural architectural practice and what we should think over about. 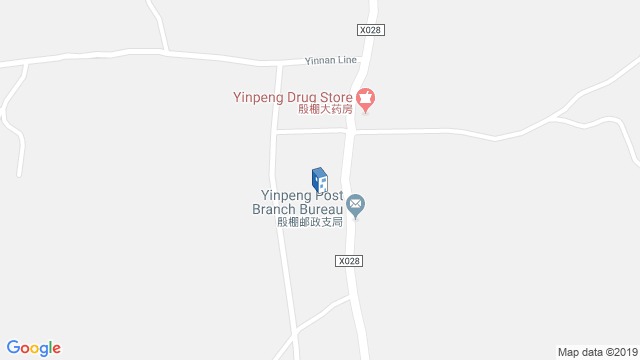 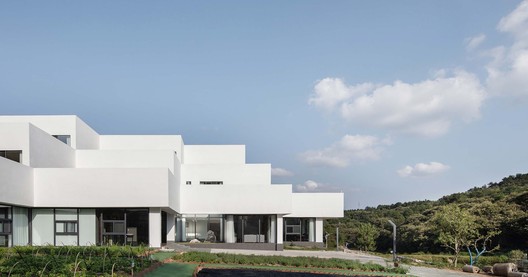