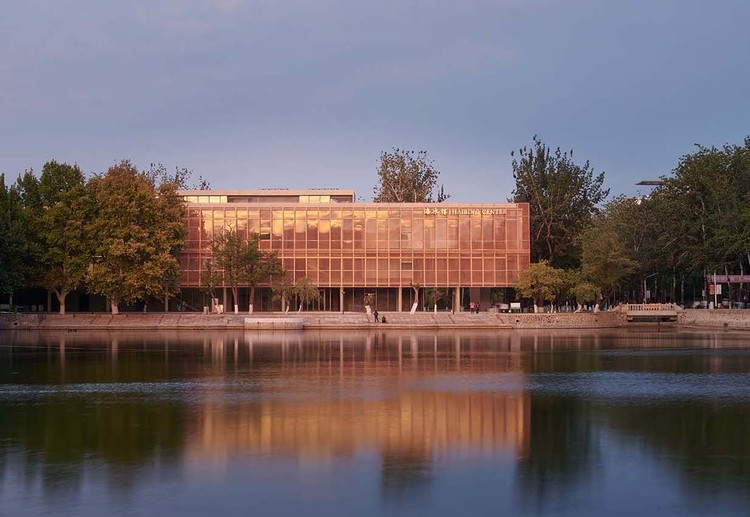 Text description provided by the architects. Haibing Center of Nankai University aims to provide the old campus with a multi-functional cultural space for students, faculties and alumni. As well as being used for teaching, the building is also capable of hosting conferences and exhibitions.

The site is flanked by water on both sides, the east side facing Horseshoe Lake, on the central axis of the original Republic of China-era campus dating from a hundred years ago. The west side faces the manmade Xinkai Lake, excavated during later campus expansion in the post-Liberation era. These two artificial bodies of water differ significantly in their atmosphere, scale, vegetation and daylighting environment.

Their respective styles reflect a rich sociopolitical and cultural legacy. In and around the building itself grow a large quantity of trees. Amid these are the remnants of a large dining hall built in 1952, which is enclosed by red brick walls and a shallow vaulted roof.

The core issues we considered at the start of the design process were how the new building could respond to both these two bodies of water as well as to the original red brick dining hall, while as much as possible preserving the existing trees and their relationship to the site. Compared to a strategy of whole scale demolition and rebuilding, an idea focusing on preservation helped us to unite the new with the old in a more authentic way, maintaining the actual history of the location.

In terms of layout, we worked from the scale and open plan of the original dining hall, dividing the space into a central grand hall and a 1000-capacity multi-functional auditorium. The grand hall is the tallest vertical space of the building, with its concrete roof slab being supported by four giant pillars.

In the cross section, the pillars narrow and widen in two directions with height, implying the load borne by the structural components and giving the space a directionality at various heights.

To the East, South and West, we located entrances. In this way, the grand hall can serve as a space for connection and convergence within the overall layout. Outside the southern entrance to the grand hall, we designed a small public plaza, enclosed on three sides.

The plaza opens out onto Horseshoe Lake to the east and incorporates the southern wall of the dining hall as its northern boundary. Its western and southern interfaces are framed by newly constructed volumes raised up at varied heights above the ground，visually and spatially linking the plaza with Xinkai Lake and the campus' main artery, Dazhong Road, in different directions.

The west side facing Xinkai Lake provides an expansive view, suggesting the scale of the campus. Acting as a response, the building on this West side establishes a serene horizontal elevation stretching out in harmony, parallel with the body of water. The western volume rests on a single story height piloti, forming an internal colonnade. Taking advantage of the limited depth of space, we located classrooms, small and medium sized conference halls, circulation cores, restrooms and other service spaces here.

In the narrow three story high “canyon” space adjacent to the original western wall of the old dining hall, a straight staircase vertically threads together the various programs at different levels. In comparison to the simple and uniform volume at the Xinkai Lake side, the part along the Horseshoe Lake side appears to be a more dispersed cluster, as befits the more intimate scale and more richly layered space of Horseshoe Lake within the campus.

Because the site and its surrounding area have numerous lush trees, creating a pleasantly aesthetic surrounding landscape, we decided to use clear glass as the major material for the façade. Only the red brick of the old dining hall was kept. In order to reduce the energy consumption associated with direct sunlight, we originally designed a copper mesh skin as a sunshade affixed to the glass façade.

Unfortunately, due to the pressure from the completion schedule in the later phase of construction, we had to modify the original design which applied a double skin to the whole building, and only utilized this feature on the Xinkai Lake section, much to our regret.

For us, Haibing Center is an attempt to build a spatial response particular to a specific site. We hope that this newly implanted space will further stimulate a positive and high quality modern campus lifestyle in a way that respects the natural environment while retaining the texture of the old campus. 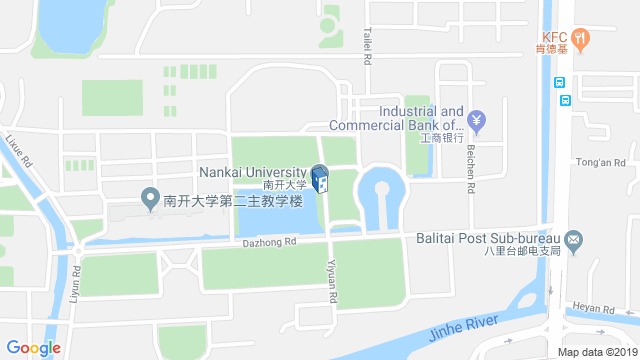 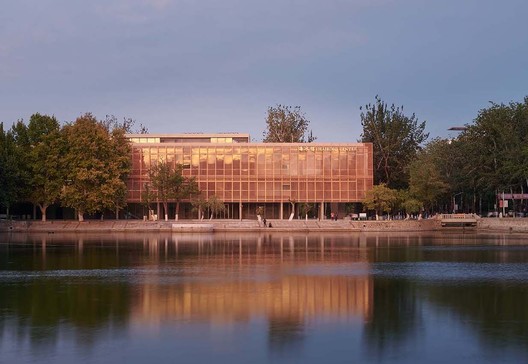