Save
Twin Cabins in the Patagonian Andes / forma Architecture 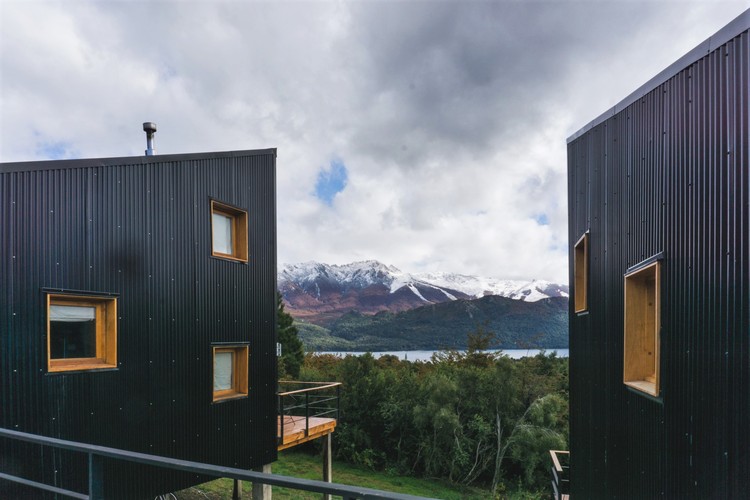 Text description provided by the architects. Located in the neighborhood of Entre Cerros in San Carlos de Bariloche, Andinas Mellizas Patagónicos is a project of two twin houses of 65m2 each. Surrounded by patagonian vegetation, the houses stand between maytenuses, nires and cypresses on the hillside of Cerro Ventana looking towards Lake Gutierrez and the slopes of Cerro Catedra. The two volumes are supported on poles, letting the natural mantle of the soil lay freely below with the intention of generating the least impact on the forest. With identical floor plans, what differentiates the houses, is that the ambients alternate and adapt, each one, to the different slopes of the site. A sensible understanding of the context was sought. Both regarding the section and the floor plan, the form opens towards the landscape. The front facade tilts outward, thus generating the access eave and extra interior space outside the floor plan itself.

The houses are partially prefabricated in a workshop and transported to the site. In order to achieve a product that is consistent in its technique, the entire project is modulated based on the dimensions of the 1.12m x 2.44m OSB plates. Thus, construction was streamlined and resources were maximized with an almost zero discard. Following the consistency of the modularity, phenolic tertiary plates cut to 20cm were used for the interior cladding. Working within the modules also saved time and material during the installation.

Facing windows generate cross ventilation as a passive means for air conditioning. A large window facing the north-west with a view of the hills is the result of a dematerialization of the wall, a window towards the skeleton of the structure showing its modularity.

As an outer covering, black corrugated sheets were used where the black colour helps to generate heat passively in the winter. We believe that sustainability is not only measured in the number of solar panels, but it is a much broader term that encompasses everything from the responsible use of natural resources (wood is a renewable resource and has a negative carbon footprint, since it accumulates carbon) to effective construction methods, avoiding discards and saving time and money, as well as passive means of energy efficiency with simple solutions such as orientation, cross ventilation, the colour of the exterior cladding and good thermal insulation. 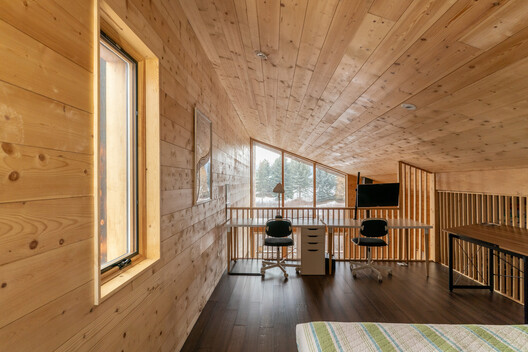