Save
Take a Look at the First WeWork Headquarters Coming to Bengaluru, India
Share
Or
Copy 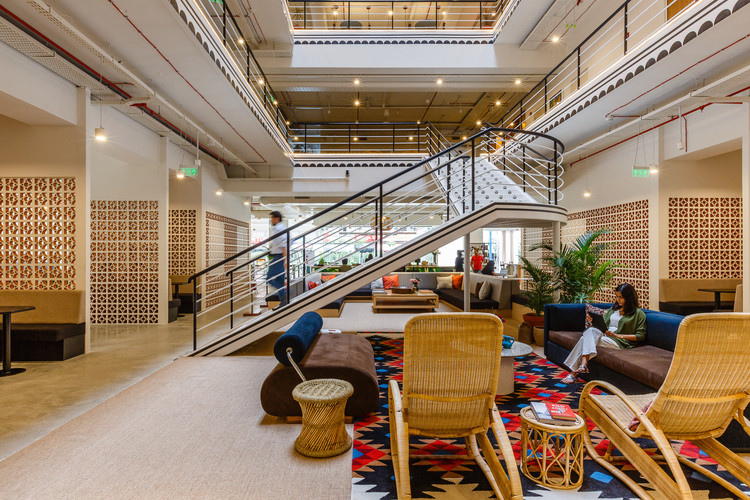 The space serves as the official headquarters for WeWork in India. Members enter the building via a large atrium that runs throughout the building's main floor. The space is furnished with sofas and plants and is lit up by a large skylight that can be seen from the ground floor while a grand metal staircase provides access to the upper levels. The walls are accentuated with bricks forming large circular patterns, a nod to traditional Indian architecture. The open slab of each floor overlooking the atrium is decorated with a black and white local pattern of stripes and scallops commonly found in traditional Indian Palaces.

The first floor boasts a tea house, wellness area and library. The tea house is an intimate room with a large built in sofa with natural light peering through the brick wall. Located next to the chai pantry, the intent is to create a quieter, secluded space for the members. The wellness area is separated from the rest of the building by a vestibule of wooden screens. Inside, the walls are black, and the room is lit by a purple perimeter neon. At the center of the room there is a large bench made of yellow Jaisalmer stone with a planter. The library is tucked in a corner of the floor, decorated both by books and blue pottery made in Delhi by a local craftsman.

Local coffee roaster Blue Tokai is located at the entrance of the building, outfitted with local red wood counter tops and sai wood millwork, along with seating made by a local street vendor. Additionally, all offices and meeting rooms feature white storefronts and wooden doors to brighten and bring warmth to the space.  The rooftop offers a beautiful view of the city along with a yoga area, several ping-pong tables, perimeter large built in sofas and cafe tables, large working tables and built in loungers.