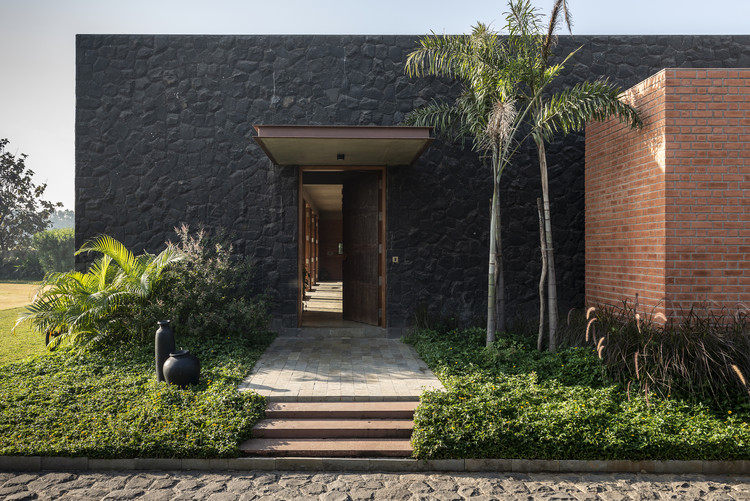 Text description provided by the architects. Jetvan means a tranquil place and the design exacts the name. Situated in the outskirts of Surat city, in a village of Ladvi set amidst the exceptionally beautiful context of lush green patches and farmlands.

As the client wanted to sneak out of urban life, we intended to provide spaces that had visual privacy as well. Thus, the series of spaces unfold in that manner, as one enters deep into the house. The house is a perfect blend with nature that gives the feeling of being one with its surroundings.

In 10,000 sq. mt. of the linear site, to achieve the scale of space, we divided the plot in a sequence of various private spaces, according to it's needs which were protected by landscape or a stone wall. The plot is divided into six major parts which include, The entrance, Semi-open pavilion surrounded by coconut trees, Open Lawn, The built structure, Back Court, and farmland, which can be easily identified in the layout.

A dramatic entrance is created with a stone wall and landscaped central region that defines the character of the space. The house is designed by dividing the regions based on the nature of spaces, giving a gathering space in between for interaction along with public and private zones on either side. The north side of the house is surrounded by Champa which implicates the experience.

With quiet Human proportion Living/dining area block placed NS axis opening its east face completely towards the vast garden connecting it visually with gazebo surrounded with palms. Other two blocks bedroom and services having their separate entity yet connected with single plinth and swimming pool in between which examines green heaven at back. One stone wall covering service unit binds the units in one thread and provides excellent texture in pool area.

The spaces between the blocks are shaded by the southern block, which is higher than its northern counterpart. It allows the flow of cool south-west wind filtered through trees and a pool that leads the public area and activity space. It hosts a semi-open deck with columns within the pool.

The central courtyard contains an open staircase going to the upper floor of the southern block, where a threshold space develops the frame of lush green farm. Various pockets have been created that aims to balance the layout of different void and solid mass.

Respecting the context, we kept the material pallet very subtle and used expose concrete(gray), Mud Brick(Gerua), Wood(brown), and Stone(Dark Gray). Hence it gave the house its belonging in this green lap and made the surroundings look more prominent and as the primary design element. 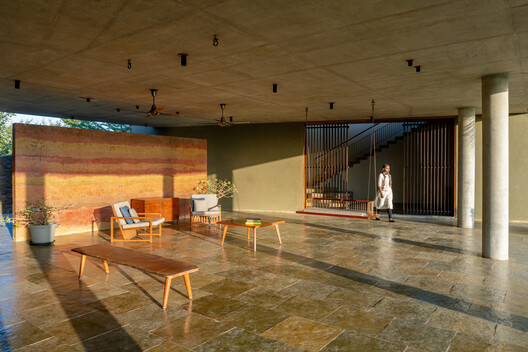