Exhibited in Oslo Architecture Museum from 26th of October to 24th of November 2019 for the 2019 Oslo Architecture Triennale (ab)Normal will focus on the existing relationship with the city of Oslo and the automation processes that our rapidly intersecting our path. As part of an on-going research by (ab)Normal with Ludwig Engel, Oslo will be here depicted through a different lens, highlighting several aspects that are yet to come and raising awareness of others that are already within us. 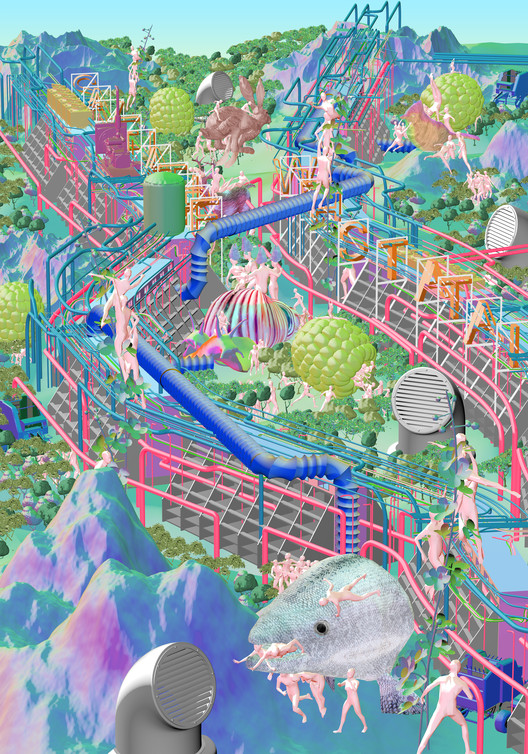 The installation at the Library will be a mix of media covering a surface of 2.9 m x 4.2, different materials have been taken into account: Supralon fabric that will serve as canvas for the depiction of Oslo, screens that will be punctually placed on the same surface (aiming to create a seamless transition between the analog and the digital surface).

Despite the rumors, automation could contribute to the construction of eco sustainable paradise, freed from the fatigue of labour and supported by an ecosystem of machines.

ARPA is an artefact reflecting on the progressive transformation of labour and the socio-economic consequences linked to the introduction of automation in production processes.

The proposal is shaped as an instrument of propaganda, a device part of larger communication strategy staged in the city of Oslo, informing about a forthcoming technological revolution. The collision between the two media involved – still images and scrolling video-texts – unveils a disturbing asymmetry between the positive impact generated by an efficiently automated Utopia and the emerging social topography, dominated simultaneously by luddite revivals and machines enthusiasms.

The emerging role of artificial intelligence in our daily lives is coinciding with the spread of degrowth thinking. How might these currents co-exist?

Working against the tide of prevalent techno-pessimism, ARPA is a fictional artefact from a future Oslo where automated machines maintain the ecologically balanced paradise that humans alone were unable to create. The image and scrolling text are framed as a propaganda tool operated by the city government.

Look closely and discover the social tensions bubbling under the surface of this utopian scenario.